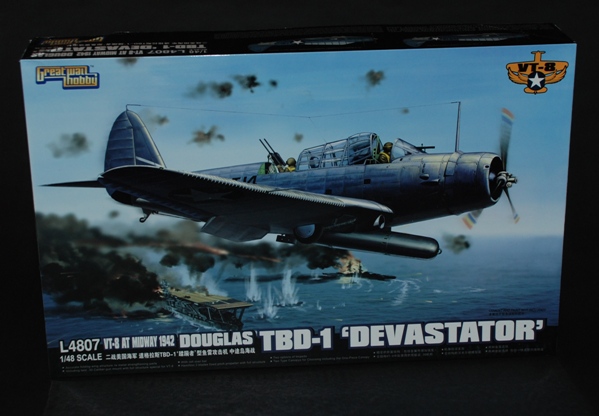 Our thanks to The Airbrush Company Ltd for supplying our review sample.

A bit of Background

On December 7 1941 after the IJN combined fleet sneak-attack on the US Navy Pacific Fleet anchored at Pearl Harbor, the US entered the war.

The TBD-1 removed its shiny silver coat and put on a more sombre grey camouflage scheme. It took part in almost all the US Navy actions against the Japanese fleets and harbours before the Midway campaign.

The Midway campaign was the turning point of the Pacific War and it was the last battle that the TBD-1 acted as the main torpedo bomber in front-line units.

The war promoted rapid progress in aviation terms, especially weapons and the TBD-1 was unable to keep up. It did though mark up some ‘firsts’ when it came into service several years earlier.

In the Midway campaign, when the TBD-1s from VT-8 led by Lieutenant Commander John C. Waldron sighted the enemy carriers, they attacked the Japanese fleet without any fighter escort.

Sadly, all 15 TBD Devastators of VT-8 were shot down by anti-aircraft gunners and the much faster Mitsubishi A6M2 “Zero” fighter, not being able to inflict any damage. Ensign George H. Gay, Jr was to be the only survivor.

Because of the determined attack by the TBDs from VT-8, the fighter cover was able to be kept occupied while three squadrons of American SBDs began dive-bombing the IJN aircraft carriers untroubled. Three carriers were put out of action and were eventually abandoned and scuttled, which led to the final victory in the Battle of Midway.

Thought-provoking and useful too…

It’s clear that quite a few of you also build armour kits and I only mention this because Great Wall Hobby (GWH), who are well known to armour modellers, may be new to aircraft modellers.

The fact that they have now turned their attention to aircraft in 1:48th scale – with a number or recent releases as mixed-media kits – is very good news for us – especially if you like US types. The P-61 Black Widow and Fw-189 are also impressive new tools.

The quality and precision/detailing on GWH armour kits is very high and this new kit looks to be well tooled too; not perfect, but certainly at the forefront of what we can expect these days.

What’s in the box…