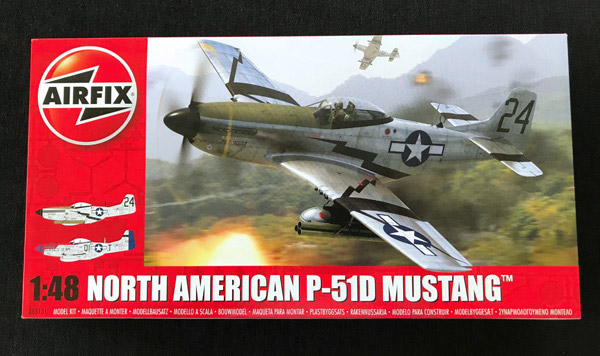 Amazingly, I have already seen a couple of these completed 1:48 P-51Ds made from this new-tool kit from Airfix. The box art as ever is stunning and when you get inside the contents don’t disappoint. This model certainly looks the part from looking at the large parts count in the box :) 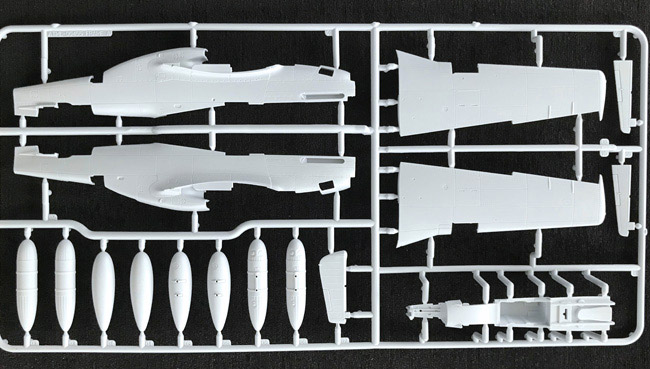 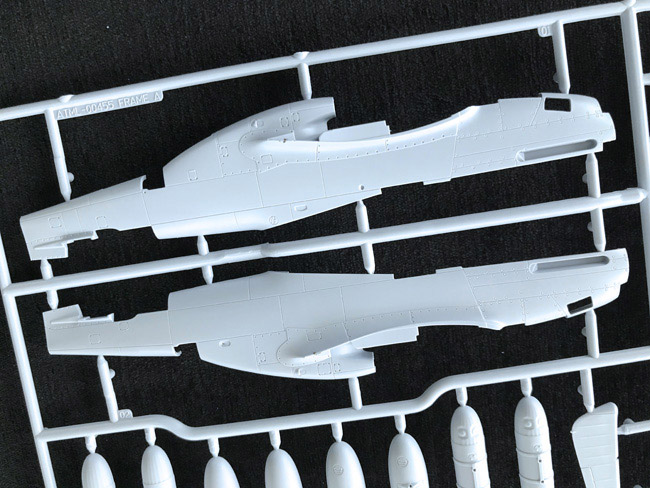 The plastic is just like the manufacturer’s other recent releases – slightly soft yet well-tooled light blue-grey parts. Panel line detail is scribed and well done for the scale. Detail and finesse of parts is high – even better than usual from this manufacturer and that’s a great step in the continuing general improvement in new products from Airfix.

Main wings – separate upper wing halves split in two horizontally and attaching to the one-piece lower wing section. It’s good to see surface detail provided on the wheel bay interiors – speaking of which these are excellent with separate detailed rear walls that combine as wing spars to give the whole wing rigidity – a very similar approach has been taken by Airfix with their new hawker Hurricane in the same scale.

No option this time (unlike the Hurricane) for open gun bays, nor engine compartment.

Flaps – really pleased that the option for dropped flaps is there, as almost all P-51s parked on the ground can be seen with dropped flaps.

Rudder / elevators – These are neatly moulded separately so that you can add some interest by slightly offsetting if required.

Cockpit – One of the real strengths in my view – everything is there to make a perfectly representative Mustang. The main instrument panel is well moulded with good raised detail as are the cockpit side walls. Watch the latter as there are a few mould ejector pin marks to remove before painting.

The seat has the distinctive cushion moulded on, along with a simple seat harness that should look perfectly good if carefully painted.

Undercarriage – again, another strength in the kit – all the detail is there as far as I can see to make these areas eye-catching. The wheel wells are well done too with their rear sections integral with the equally detailed main wing spar as mentioned above. Another nice touch is the internal wheel bay detail moulded to the top of main inner doors – this will be readily visible and so makes sense to offer that level of detail – nice.

The wheels are provided with and without tyre tread patterns and all have a subtle bulged effect which is great.

Propeller – the four-bladed Hamilton Standard prop is well formed as are the exhaust stacks, although these have some mould sink marks to take care of if they bother you.

Stores – two pairs of drop tanks are included that feature both metal and paper tanks carried by the type. You also get the option for a pair of rocket launchers – one under each wing.

Pilot figure – a seated pilot figure is included and he looks well tooled. Separate arms can allow you to fine tune his position in relation to the cockpit seat and controls. 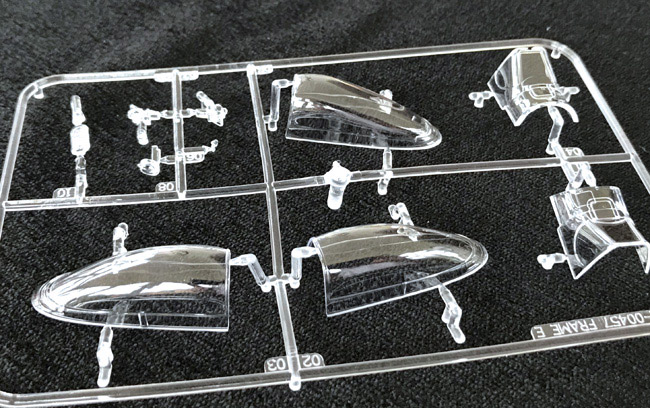 The canopy is helpfully split so front windscreen and rear sections are separate allowing you to pose your canopy open or closed. Crystal clear, blemish-free and well moulded without any distortion. I like the fact that different styles of canopy are included depending on which P-51D you are building. Another nice tooling advantage is that there is no canopy seam line to eliminate – happy days! 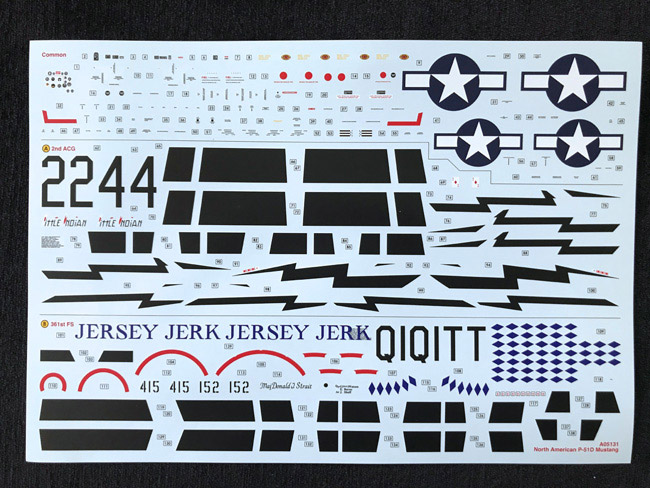 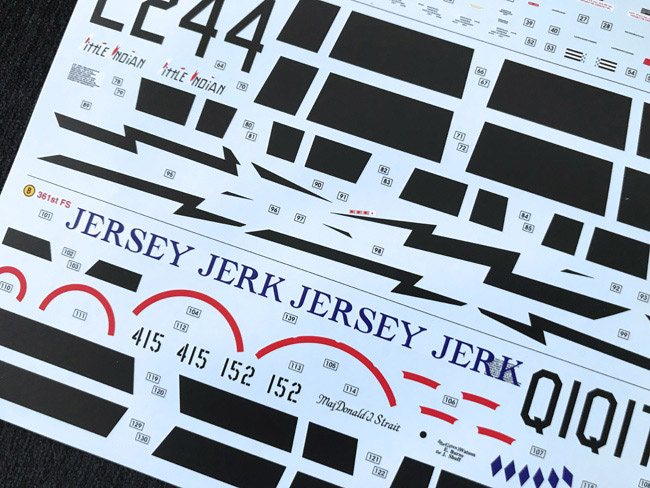 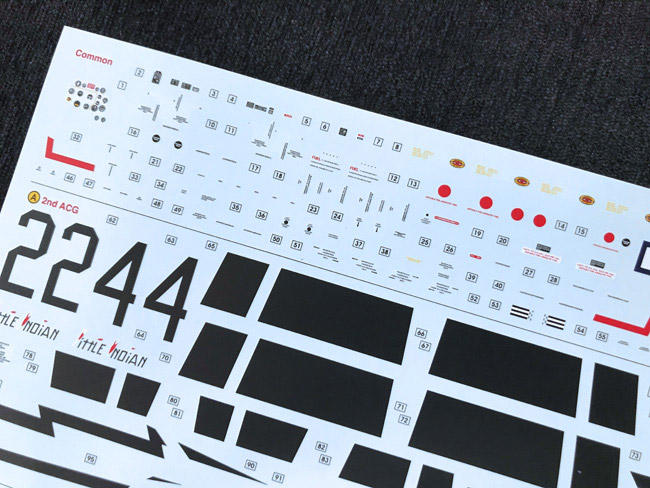 This is a good package with excellent levels of quality and detail across the whole kit. We will be building this one in the near future and that will show how it all goes together and I for one am really looking forward to it.
Geoff C.

The Mustang was originally designed to use the Allison V-1710 engine, which, in its earlier variants, had limited high-altitude performance. It was first flown operationally by the RAF as a tactical-reconnaissance aircraft and fighter-bomber (Mustang Mk I). The replacement of the Allison with a Rolls-Royce Merlin resulted in the P-51B/C (Mustang Mk III) model and transformed the Mustang’s performance at altitudes above 15,000 ft, allowing the aircraft to compete with the Luftwaffe’s fighters. The definitive version, the P-51D, was powered by the Packard V-1650-7, a license-built version of the Rolls-Royce Merlin 66 two-stage two-speed supercharged engine and was armed with six .50 caliber (12.7 mm) M2/AN Browning machine guns.

From late 1943, P-51Bs and Cs (supplemented by P-51Ds from mid-1944) were used by the USAAF’s Eighth Air Force to escort bombers in raids over Germany, while the RAF’s Second Tactical Air Force and the USAAF’s Ninth Air Force used the Merlin-powered Mustangs as fighter-bombers, roles in which the Mustang helped ensure Allied air superiority in 1944. The P-51 was also used by Allied air forces in the North African, Mediterranean, Italian and Pacific theatres. During World War II, Mustang pilots claimed to have destroyed 4,950 enemy aircraft.