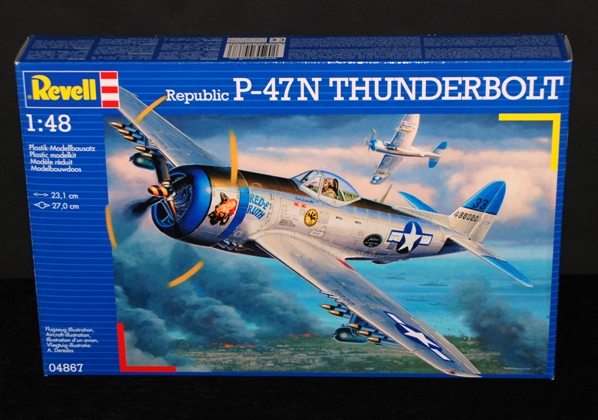 The P-47N was the last Thunderbolt variant to be produced. It was designed as an escort fighter for the Boeing B-29 Superfortress bombers flying raids on the Japanese home islands. Increased internal fuel capacity and drop tanks had done much to extend the Thunderbolt’s range during its evolution, and the only other way to expand the fuel capacity was to put fuel tanks into the wings. Thus, a new wing was designed with two 50 U.S. gal (190 l) fuel tanks. The second YP-47N with this wing flew in September 1944. The redesign proved successful in extending range to about 2,000 mi (3,200 km), and the squared-off wingtips improved the roll rate. The P-47N entered mass production with the up-rated R-2800-77(C) engine, with a total of 1,816 built.

The very last Thunderbolt to be built, a P-47N-25, rolled off the production line in October 1945. Thousands more had been on order, but production was halted with the end of the war in August. At the end of production, a Thunderbolt cost $83,000 in 1945 U.S. dollars. A total of 15,678 Thunderbolts of all types were built.Due to continued postwar service with U.S. military (including the ANG) and foreign operators, a number of P-47s have survived to the present day, and a few are still flying.

This isn’t a new-tool Republic P-47N Thunderbolt, but a re-release of an earlier tooling dating back to 1997 (check out the date stamp on the lower trailing surface of the main wing). What you get is a pretty well-tooled model that is suffering a bit from excess flash and some part’s detail soft. Revell has included new decals for a brightly coloured machine from the Pacific Theatre. Read on to find out more about what’s actually included…

Revell persist with rather flimsy boxes that are doubtless cheap to produce yet somehow manage to protect the contents although prove less useful during construction. I love the box art included with this model though featuring an image of a P-47N Thunderbolt resplendent in classic “Red-E-Ruth” markings engaging targets – great stuff.

The solver-grey sprues are packaged well and no damage is apparent. Taking the main components first, they are quite well tooled, recessed panel line detail although on closer examination, a somewhat dated feel and a little brittle – much like Hasegawa kits can appear and Monogram too. No distortion was apparent and a dry fit of the fuselage halves join looks like it’s going to offer a reasonable fit.

The cockpit looks busy enough with a reasonable seat for the scale and separate instrument and side panels. The moulded raised detail is ok and once you paint and weather these they should look fair enough. Remember that the canopy sills sit atop a curved fuselage making for an opening that isn’t that big, so you won’t see a great deal. A pilot figure is included as you’ll see from the accompanying photos.

You can see the manufacturer’s photos of their completed model in the Gallery Grids included with my review and I for one think this model looks every bit a P-47N, with that ‘Jug-like’ squat sit of the aircraft.

You can see for yourself that Revell has included a pair of wing drop tanks, under wing rockets and a pair of bombs. The stores are well tooled, albeit suffering quite a bit of excess flash and what’s on offer can easily be seen in the accompanying images.

The wheels bays and main gear units are central features of any P-47 Thunderbolt kit and you can see that they have reasonable detail and will further benefit from hydraulic lines that you can add.

The Revell instructions follow their usual exploded stages format. Location of parts is clear but colour paint coding is for Revell paints only so either use their paints or try to match your own choice of paints. The build sequence is pretty standard and logical but many modellers will part company with the stated order to suit their experience.

The decals look to be good quality – certainly good subject choices; stencil detail is also provided and is almost always well worth adding, especially in 1:48 scale to add additional interest to your completed model. All the colours are in register and colour density looks impressive and carrier film limited, so I wouldn’t expect any problems with application.

Thunderbolts are always popular kits and despite its age, the markings alone should ensure that this re-release sells well and be popular with modellers, especially with those that have an interest in all things WWII and American. For your money this Revell package is worth a look, especially when you consider what you’ll probably have to pay for an equivalent Hasegawa or Tamiya kit!