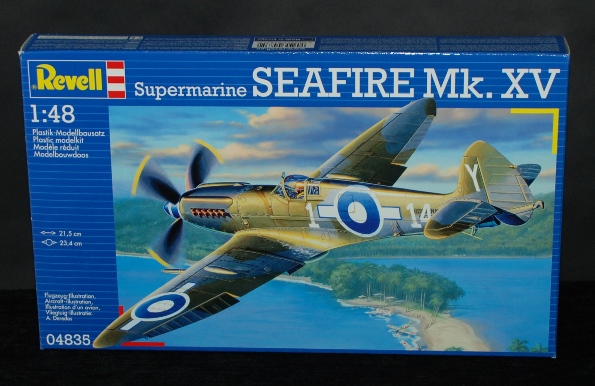 OK, it’s not a Mk.XV, but it’s till a Seafire and very nice it is too!

After the Mk III series the next Seafire variant to appear was the Seafire F Mk XV, which was powered by a Griffon VI (single-stage supercharger, rated at 1,850 hp (1,379 kW) at 2,000 ft (610 ft) driving a 10 ft 5 in Rotol propeller. Designed in response to Specification N.4/43 this appeared to be a naval Spitfire F Mk XII; in reality the Mk XV was an amalgamation of a strengthened Seafire III airframe and wings with the wing fuel tanks, retractable tail wheel, larger elevators and broad-chord “pointed” rudder of the Spitfire VIII. The engine cowling was different to that of the Spitfire XII series, being secured with a larger number of fasteners and lacking the acorn shaped blister behind the spinner. The final 30 Mk XVs were built with the blown “teardrop” cockpit canopy and cut down rear fuselage introduced on the Spitfire Mk XVI. On the first 50 aircraft manufactured by Cunliffe-Owen a heavier, strengthened A-frame arrestor hook was fitted to cope with the greater weight. On subsequent Mk XVs a new form of “sting” type arrestor hook was used; this version was attached to the reinforced rudder post at the rear of the fuselage and was housed in a fairing below the base of the shortened rudder. A V-shaped guard forward of the tail wheel prevented arrestor wires getting tangled up with the tail wheel.

390 Seafire XVs were built by Cunliffe-Owen and Westland from late 1944. Six prototypes had been built by Supermarine.

This Revell release is in fact the Special Hobby kit repackaged with new decals and instructions. That’s no bad thing though as the model looks quite good as you’ll see from the detail in the photos.

Revell persist with rather flimsy boxes that are doubtless cheap to produce yet somehow manage to protect the contents although prove less useful during construction. I love the box art included with this model though featuring an image of a Seafire sweeping low over the coast – great stuff!

The grey sprues are packaged well and no damage is apparent. Taking the main components first, they are quite well tooled, recessed panel line detail although on closer examination, a somewhat dated feel and a little brittle – much like Hasegawa kits can appear and Monogram too. No distortion was apparent and a dry fit of the fuselage halves join looks like it’s going to offer a reasonable fit.  Some of the fuselage detail looks a little heavy but under paint it should look ok.

The cockpit looks busy enough with a reasonable seat for the scale and separate instrument and side panels. The moulded raised detail is ok and once you paint and weather these they should look fair enough. The option for an open cockpit door is included, allowing the viewer to see more of the interior, especially if you pose your two-part canopy open too.

The elevators are separate, as is the rudder and you can pose these deflected. Some moulded detail is offered in the wheel wells and the exhaust pipes will need to be hollowed out but this isn’t difficult given the circular shape of each outlet.

The prop blades are moulded separately and these fit into the spinner boss.

The undercarriage legs look fine and they have reasonable detail and will further benefit from hydraulic lines that you can add. Separate wheel hubs always helps painting and these are included.

The Revell instructions follow their usual exploded stages format. Location of parts is clear but colour paint coding is for Revell paints only so either use their paints or try to match your own choice of paints. The build sequence is pretty standard and logical but many modellers will part company with the stated order to suit their experience.

The decals look to be good quality – certainly good subject choices; stencil detail is also provided and is almost always well worth adding, especially in 1:48 scale to add additional interest to your completed model. All the colours are in register and colour density looks impressive and carrier film limited, so I wouldn’t expect any problems with application.

Spitfires and Seafires are always popular kits and the markings alone should ensure that this re-release sells well and be popular with modellers, especially with those that have an interest in all things WWII and Royal Navy. For your money this Revell package is worth a look, especially when you consider what you’ll probably have to pay for an equivalent Hasegawa or Tamiya kit!