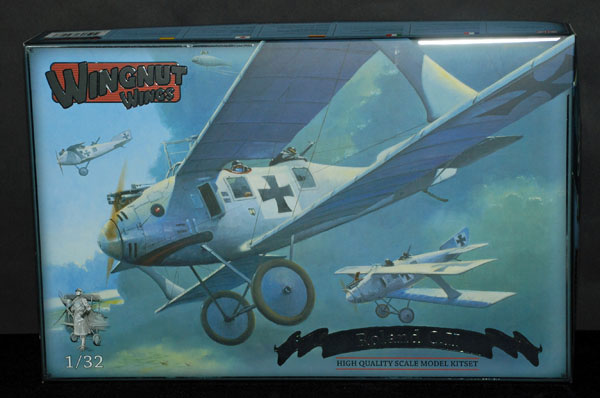 Our thanks to Wingnut Wings for supplying our review sample. Get this kit and all the other superb kits in the WW range here now at: www.wingnutwings.com

We have multiple builds of Wingnut Wings kits… just check out your Finished Now area in SMN and click Wingnut Wings under Aircraft.

I highly recommend a visit to Wingnut Wings own website as it contains a wealth of information about the type as well as hints and tips for building their kits – their website is nearly as impressive as their kits!

The LFG Roland C.II, usually known as the Walfisch (Whale), was an advanced German reconnaissance aircraft of World War I. It was manufactured by Luft-Fahrzeug-Gesellschaft G.m.b.H.

The C.II had much lower drag than comparable aircraft of its time. It featured a monocoque fuselage built with an outer skin of two layers of thin plywood strips at an angle to each other (known as a Wickelrumpf, or “wrapped body” design). This had both lower drag and better strength per weight than typical of the time, but it was relatively slow and expensive to build. (This approach was further developed in the de Havilland Mosquito of World War II.) The deep fuselage completely filled the vertical gap between the wing panel centre sections, eliminating any need for cabane struts commonly used in biplanes, and gave the aircraft its “whale” nickname. Struts and wires were reduced, short of suffering the weight penalty of cantilever wings, like those used on the pioneering all-metal Junkers J 1 of late 1915. There was even some attempt to fair the wings into the fuselage, to eliminate dead air space, a feature prominently missing from the Schneider Trophy contestants of the following decade. The engineer in charge of the design was Tantzen, a student of Prandl, the founder of mathematical aerodynamics and the one to introduce the concept of boundary layer.

Perhaps just a personal comment to start and it’s that I first remember this aircraft when I was a boy and my brother Chris was given the Airfix 1:72 kit – great joy, because I could now dogfight with him using my RFC Sopwith Camel. Many hours were spent that year in ‘battle’, the tide turning this way and that – fun and carefree days indeed ☺

Back to today and firstly to say that we will certainly be building this model for SMN (Dave C) and so keep a close eye on What’s New and Build Now for that!

This model may appeal to many modellers, perhaps more than other subjects in the WW growing range because there is little rigging and just the two main solid struts for the wings – every little helps and I urge you, if you haven’t yet built one of these impressive Wingnut Wings kits to get one and this Roland C.II would be a great place to start because of that lack of rigging and ease of wing strut arrangement.

Everything about this package oozes quality: the ultra clear instructions with helpful colour paint options table through to the period images of the type that give so much away in terms of weathering options and finishing ideas.

It is worth taking a good look at the other Here Now reviews we have completed for the Wingnut Wings range of kits – you will learn a lot about the approach that this company takes to their product releases and just how modeller-friendly the majority of them are.

Here are some observations about the plastic offered in the box:

There are more clear parts than you’d usually find on a WWI subject and what’s supplied is well moulded, clear and free from blemish as you should be able to see here. 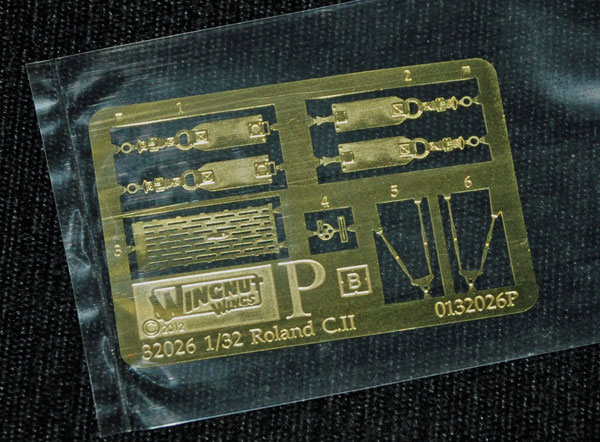 There is a nice small fret of photo-etch to use for the seta harness, gun sight, perforated MG jacket and other small parts.

Now these are a sight to behold, absolutely gorgeous and packed with historic photos and reference shots of actual aircraft and close ups of the power plant and cockpit. These should be made standard in all model kits, as they really are from the top drawer.

The WW instruction books are simply the best on the market, bar none. High quality in every respect and for me the thing that truly sets WW apart is that if you follow the suggested build sequence and stages your model should build up exactly as intended and help you to paint parts at the most appropriate time, adding sub-assemblies and detail at a logical stage – all very impressive. All too often if you followed the manufacturer’s build sequence as suggested in their instructions you’ll have damaged parts and a model that’s so much harder to paint and finish – hopeless!

Decal quality is very high and previous experience has shown that these decals go down well when applied to the usual high-gloss surface. Colour, registration and choice are all superb with no less than 5 marking options being included – this number of options seems pretty standard now with WW kits – how good is that?