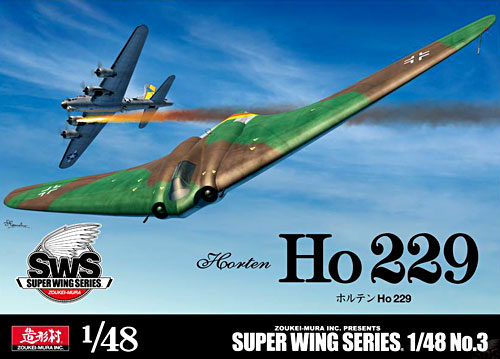 What you have here is a highly detailed model of the famous Horten Ho229 ‘flying wing’. The box is packed with parts that enables you to build your model either within a clear plastic shell or to paint these and display certain panels open to reveal the extraordinary levels of detail within.

Aaron Scott built a stunning interpretation of the ZM 1:32 shorten Ho229 and you may have seen that in the flesh at last year’s IPMS UK Scale Model World? In any case, the full build of that incredible model is right here in Finished Now – see the Zoukei-Mura pages in Finished Now for that.

This new ZM 1:48 kit is very similar to its big sister in 1:32 and Aaron rated that kit very highly, certainly the best from ZM to date (parts-fit, detail) and so it bodes well for a good build now in the smaller 1:48 scale.

Here are a few pics of Aaron’s completed 1:32 model – it will give you a good idea of what your Ho229 could look like. In case you are wondering, the wood-effect is largely from decals and Aaron explains how he achieved the look in his build (see above link). 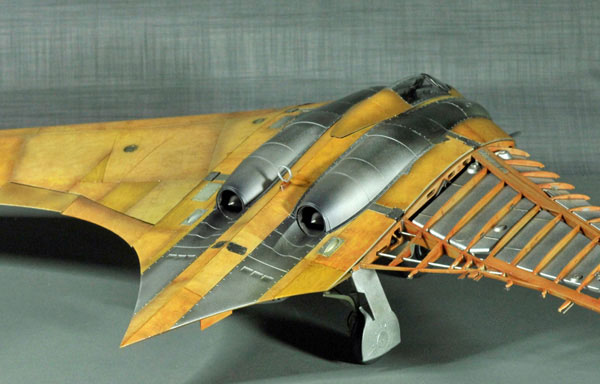 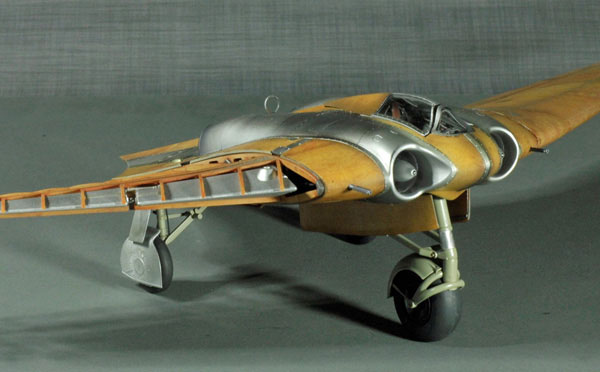 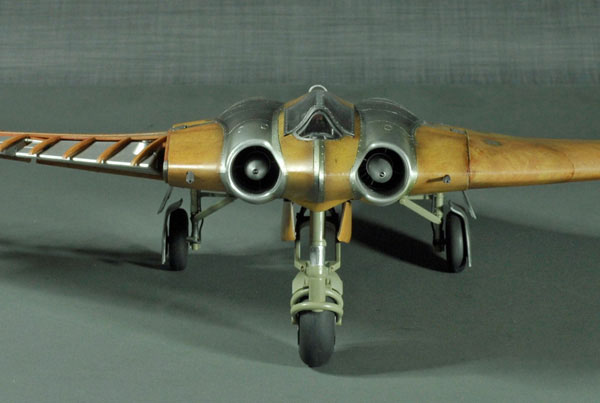 Here’s a pic of the box contents – packed full as you can see plus a couple of pics from the box sides showing the completed manufacturer’s model – nice isn’t it and very similar in look and content to the larger 1:32 model. 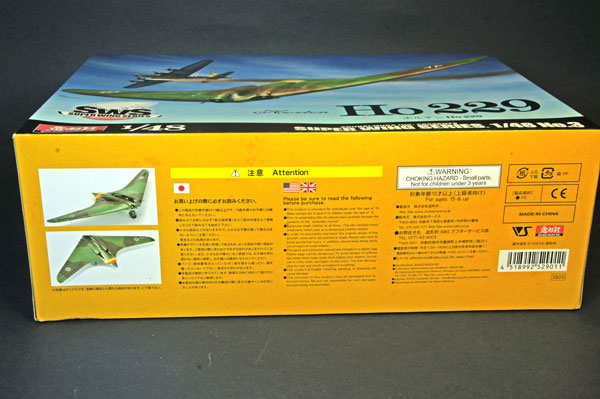 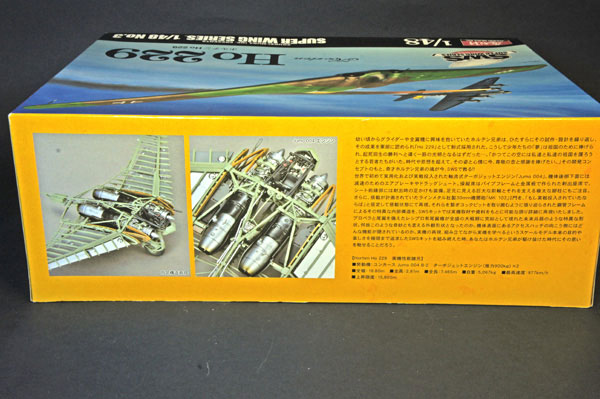 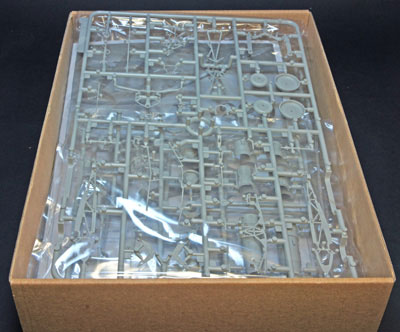 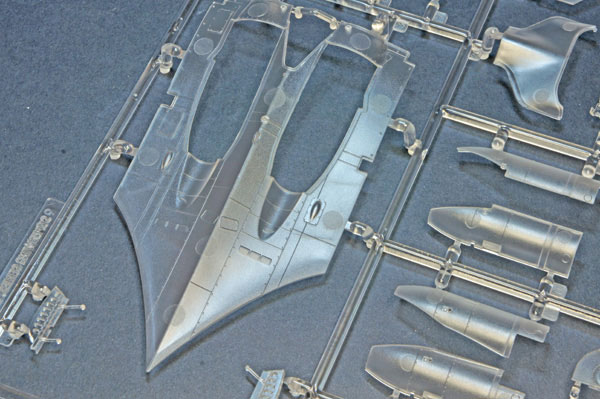 The parts breakdown is extensive and possibly a little overwhelming on first look but don’t be deceived, Aaron says all does go together very well if you follow the instructions – I think ZM are a bit like Wingnut Wings in that respect – study the instructions carefully and follow the suggested assembly sequence and all should be well, which is more than you can say for many other manufacturers’ instruction sheets which, if followed would be disastrous!

As you can see the whole interior has the potential to be visible (well, almost!) and irrespective of whether you are a fan of the ‘transparent approach’ or not, it matters not really, you just assemble and paint as you normally would.

All the detail is finely engraved with little or no excess flask on any parts.

The detail in the cockpit and engine assemblies is breathtaking and if you like detail (as I do) you cannot help but love what’s on offer here.

It’s hard to fault this kit – even the price at around the mid forties in pounds sterling offers very good value for the modelling time you will get from what’s supplied.

Aside of what’s been said above the canopy is crystal clear with no defects or blemishes. 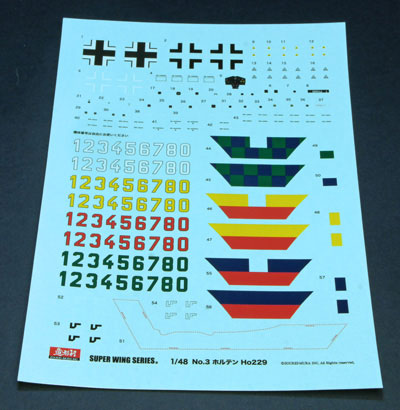 Given the limited numbers of these aircraft actually built, a great attempt has been made to provide all the possible options for many more aircraft from various units that would have flown the type had hostilities gone on beyond 1945.

This is clear and offers clear guidance for colour painting and assembly sequence.

Dave C now has the model and will be undertaking a full build in the near future, so keep an eye out on What’s New for that!

The Horten Ho229 – a little bit of background

The Horten H.IX, RLM designation Ho 229 (often called Gotha Go 229 because of the identity of the chosen manufacturer of the aircraft) was a German prototype fighter/bomber designed by Reimar and Walter Horten and built by Gothaer Waggonfabrik late in World War II. It was the first pure flying wing powered by jet engines.

The design was a response to Hermann Göring’s call for light bomber designs capable of meeting the “3×1000” requirement; namely to carry 1,000 kilograms (2,200 lb) of bombs a distance of 1,000 kilometres (620 mi) with a speed of 1,000 kilometres per hour (620 mph). Only jets could provide the speed, but these were extremely fuel-hungry, so considerable effort had to be made to meet the range requirement. Based on a flying wing, the Ho 229 lacked all extraneous control surfaces, lowering drag. It was the only design to come even close to the 3×1000 requirements and received Göring’s approval. Its ceiling was 15,000 metres (49,000 ft).

Since the appearance of the B-2 Spirit flying-wing stealth bomber in the 1990s, its similarities in role and shape to the Ho 229 has led many to retrospectively describe the Ho 229 as “the first stealth bomber”.[3] A static reproduction of the only surviving Ho 229 prototype, the Ho 229 V3, in American hands since the end of World War II was constructed in the very early 21st century and later tested by the U.S. military, who found the basic shape, paint and laminating adhesive composition of the mockup copy would provide for 37% reduction in detection range against the British Chain Home radar of the 1940s, but no significant stealth benefit against most other contemporary radar systems.