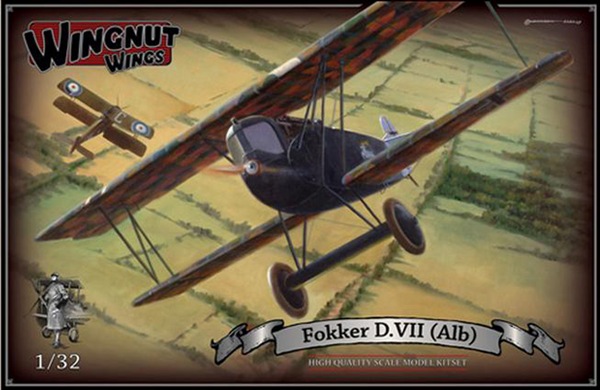 Our thanks to Wingnut Wings for supplying our review sample. Get this and all the other superb kits in the WW range at: www.wingnutwings.com

The Fokker D.VII was a German World War I fighter aircraft designed by Reinhold Platz of the Fokker-Flugzeugwerke. Germany produced around 3,300 D.VII aircraft in the summer and autumn of 1918. In service, the D.VII quickly proved itself to be a formidable aircraft. The Armistice ending the war specifically required Germany to surrender all D.VIIs to the Allies at the conclusion of hostilities. Surviving aircraft saw continued widespread service with many other countries in the years after World War I.

The D.VII entered squadron service with Jasta 10 in early May 1918. The type quickly proved to have many important advantages over the Albatross and Pfalz scouts. Unlike the Albatross scouts, the D.VII could dive without any fear of structural failure. The D.VII was also noted for its high manoeuvrability and ability to climb at high angles of attack, its remarkably docile stall, and its reluctance to spin. It could literally “hang on its prop” without stalling for brief periods of time, spraying enemy aircraft from below with machine gun fire. These handling characteristics contrasted with contemporary scouts such as the Camel and SPAD, which stalled sharply and spun vigorously.

However, the D.VII also had problems. Several aircraft suffered rib failures and fabric shedding on the upper wing. Heat from the engine sometimes ignited phosphorus ammunition until cooling vents were installed in the engine cowling, and fuel tanks sometimes broke at the seams. Aircraft built by the Fokker factory at Schwerin were noted for their lower standard of workmanship and materials. Nevertheless, the D.VII proved to be a remarkably successful design, leading to the familiar aphorism that it could turn a mediocre pilot into a good one, and a good pilot into an ace.

Manfred von Richthofen died only days before the D.VII began to reach the Jagdstaffeln and never flew it in combat. Other pilots, including Erich Löwenhardt and Hermann Göring, quickly racked up victories and generally lauded the design. Aircraft availability was limited at first, but by July there were 407 on charge. Larger numbers became available by August, when D.VIIs achieved 565 victories. The D.VII eventually equipped 46 Jagdstaffeln. When the war ended in November, 775 D.VII aircraft were in service

Click on each image below to enlarge / reduce the pictures:

Inside the box, which is, adorned by some lovely artwork is something of beauty.

The 8 sprues, which have been cleverly sorted so the parts for the engine are on a sprue by themselves and the same goes for the wheel assemblies, engine cowlings and flying surfaces.  4 different styles of propeller are provided but only 3 can be used, so offering a practice piece for perfecting that wooden finish!

All of the 8 sprues are in standard light grey plastic, and are flash free throughout and I could not find a single sink mark in the whole box. Also included is a small fret of photo-etched brass, which WILL need annealing before use, and this covers the metal air coolers and gun sights for the Machine guns and the seatbelts. A clear sprue is included also with two types of windshield. 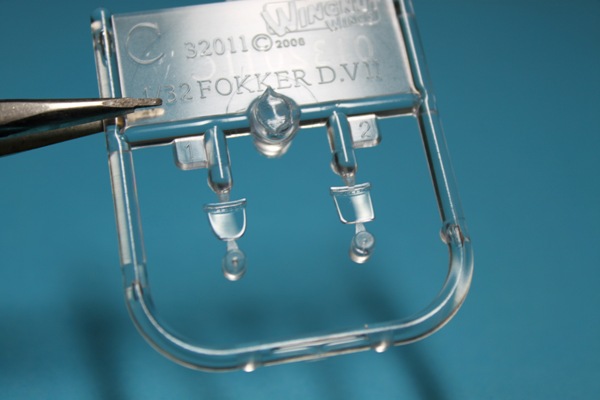 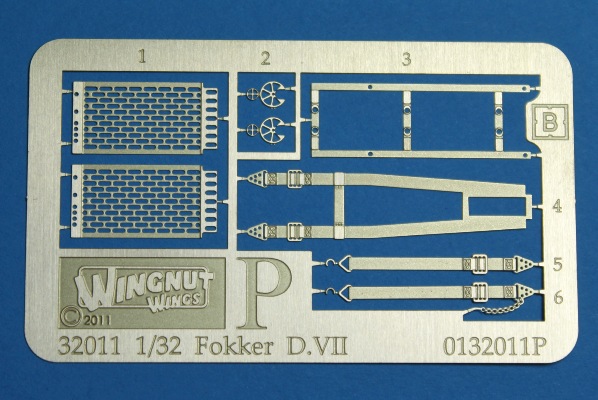 As this was an early release of this kit, we were lucky enough to have received an extra decal sheet making the number of sheets in the box 8, Yes 8! Thus meaning you can choose between 10 machines, some featuring the Lozenge style of camouflage, which look very scary (hopefully our aircraft editor can help me on this matter).

Now these are a sight to behold, absolutely gorgeous and packed with historic photos and reference shots of actual aircraft and close ups of the power plant and cockpit. These should be made standard in all model kits, as they really are top drawer.

I’ve been badgered into building a biplane for months and when this one came up for review I decided to have a go because there is little rigging involved so it was a no brainer really.

Looking at the box contents I can see why these kits are becoming more and more popular, I would highly recommend purchasing one of these remarkable aircraft as this one is going to be very popular as was the Hansa Brandenburg float plane. Buying one has never been simpler as the whole range of kits and accessories are now imported by Hannants. It retails for about £79.99 (in the UK, and possibly cheaper direct – do the maths!) that might put you off but don’t let it, this is one of the best presented kits I have ever seen and I can imagine its going to be one fun build.