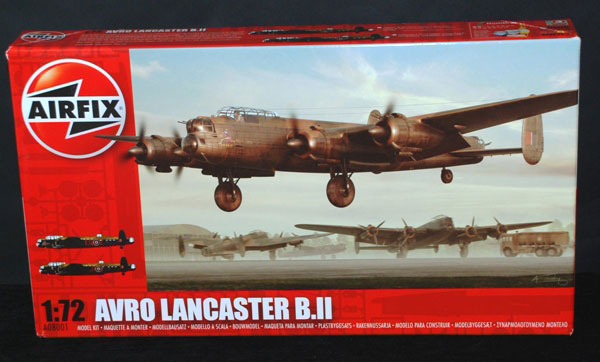 This is another great release from Airfix – a completely new-tool Avro Lancaster but not just any other Lanc but the much less-kitted B.Mk.II featuring the rounded cowls containing the Hercules engines.
You may well have read my full Here Now review for the recently-released B.III (Special) “Dambuster” and you can find that here. Furthermore, we carried out a full build too and that’s been in Finished Now for some time – here.

Clearly much of that review will be applicable here as this release contains the additional sprue to include those Hercules engines/cowls; so just have a good look at the photos and you’ll clearly see the differences. 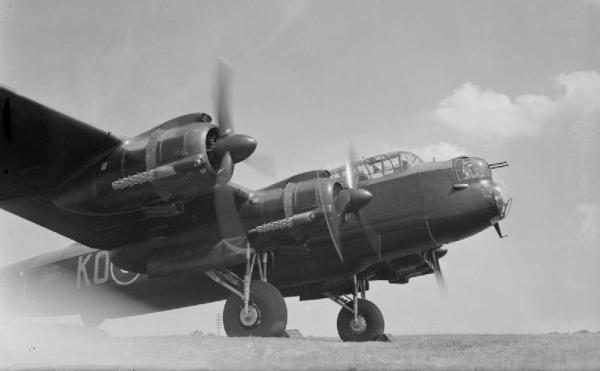 The Avro Lancaster B.II was a Bristol Hercules (Hercules VI or XVI engines) powered variant, of which 300 were produced by Armstrong Whitworth. One difference between the two engine versions was that the VI had manual mixture control, requiring an extra lever on the throttle pedestal. Very early examples were fitted with an FN.64 ventral turret; however, these were quickly removed due to problems with aiming the turret through its periscope (which prevented the gunner from seeing a target he was not already aiming at), and inadequate traverse speed.

Due to the Luftwaffe Schräge Musik attacks, a variety of unofficial field modifications were made, including fitting of 20 mm cannon or a .50 inch machine gun in the open hole where the FN.64 had been installed, before an official modification (Mod 925) fitted with a .303 inch machine gun was authorized for the same location, though not in all aircraft. These were rarely installed on other variants as the H2S radar that was not used on the B II was mounted there. Three types of bulged bomb bay were used on the B II, the prototype having a narrow bulge running from just aft of the cockpit to the end of the bomb bay, while early production examples had a full width bulge that ran the same length and on late production examples the bomb bay doors were prominently bulged throughout their length.

A box crammed full of light blue-grey sprues.
The plastic has a better feel to it than in some past releases, less powdery, quite smooth and on the softer side of hard. Having built the Harrier GR-7 and several other newer Airfix kits (see your Finished Now area), this plastic is very similar and is easy to trim, sand and work with. Panel line detail is recessed and in 1:72 scale looks quite good to me, a bit heavy for the purists but once covered in paint it should look ok.

Simply stunning! How moody is that? This is one of at least two beautiful box art images by Alan Tooby – so evocative and will undoubtedly sell many of these kits. Some of you may be wondering why I am commenting on the box? Well, the fact is great box art sells kits and I for one think the box is all part of the whole buying and ‘owning’ experience – it matters! Even better when the contents match the box in terms of quality and this is the case here in my opinion.

Detail in the cockpit is perfectly adequate for this scale, in fact better than adequate. Examples are the pilot’s seat, internal rib detail and navigator position – all have authentically produced detail; also the delicate control yoke. Right about now I start to take more detailed interest and inspect the remainder of the sprues for subtle detail; more of that in a moment. Decals are provided for the main instrument panel and this will be just fine in this scale with the dial detail being comprehensive and noteworthy.

You do get a pilot if you want to add him – but he looks a bit retro to me and out of keeping with the rest of the kit.

The finesse of the undercarriage legs is extraordinary – probably amongst the best I have seen in this small scale. No flash, just fine, accurate crisp moulding – impressive. Also a nice set of slightly bulged tyres is supplied and when painted and weathered these will add to the final authentic look of your model.

Once again the panel line detail is not bad. Airfix are certainly listening to modellers and showing great willingness to raise their standards to that of the best and they are certainly getting closer with this kit. The rudders and flaps are positionable to help you create more interesting options if you wish. The internal detail in the flaps is worthy of note and will look great if weathered.

Separate bulged bomb bay doors are included – this was so that the B.II could carry the large 8,000lb bombs.

Pointed propeller blades applicable to the B.II are included for the Hercules-powered engines.

Nice looking these – very clear without any flash. The canopy plastic is thin too adding to the quality of the package.

The instructions are logical and well laid out. The usual exploded-stage diagram approach is used. The colour painting guide is provided as a separate sheet and I like that, making it much easier to use and have in front of you when painting and applying the decals.

The decal sheet is well printed with all markings/colours in register.

A great addition to what’s already available and significantly better than the Revell offering in my view in terms of detail, tooling and options. The recessed detail is ok but could be finer for sure are counterbalanced by the beautifully delicate and detailed undercarriage legs and bulged tyres – all positive, as is the choice of decals. It offers good value for money and all in all a nice new kit beautifully presented.