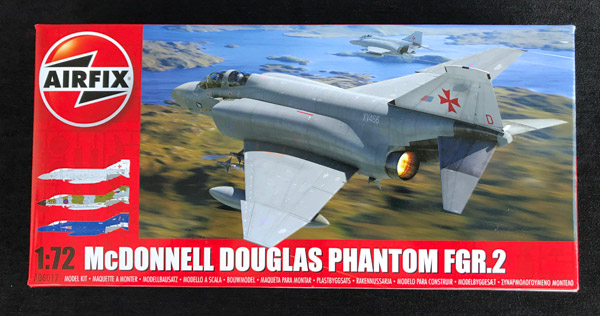 Having released the nasalised FG-1 version of the Phantom, Airfix has launched the RAF variant, the FGR-2. I remember building the very good Fujimi kit at least twice in years gone by and we’ve waited for so long to get another kit to a high standard and Airfix have duly obliged with this release. 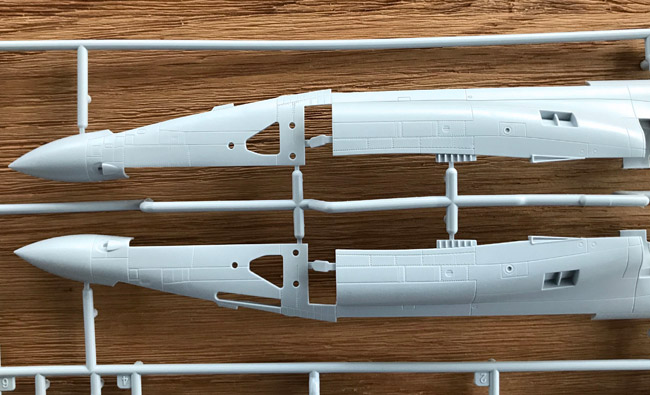 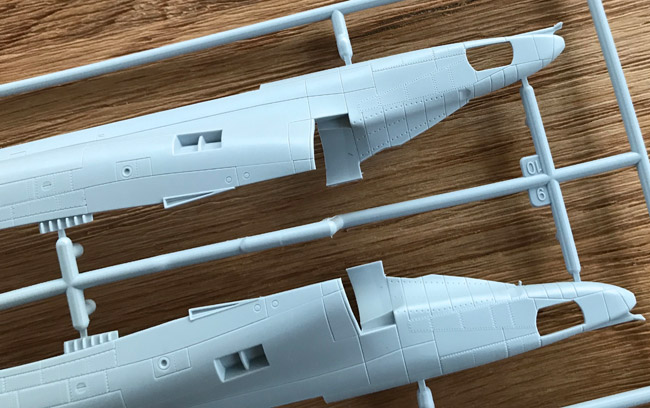 There are three great schemes on offer too: a No 1435 Flight FGR-2 when the aircraft was based in the South Atlantic guarding the Falklands (Barley Grey over Light Aircraft Grey undersides and Medium Sea Grey nose cone. The addition of that striking white fin and red Maltese Cross will make this a popular choice for modellers (including this one!)

Then you have that excellent Roundel Blue overall No. 92 Squadron machine from RAF Wildenrath, RAF Germany 1992, one of a pair painted up at the end of their service life. The other (not included) was from No. 19 Squadron, the sister squadron also based at RAF Wildenrath.

Your final choice is a classic RAF Grey/Green over Light Aircraft Grey undersides machine of No. 2 Squadron, RAF Laarbruch, Germany 1972. 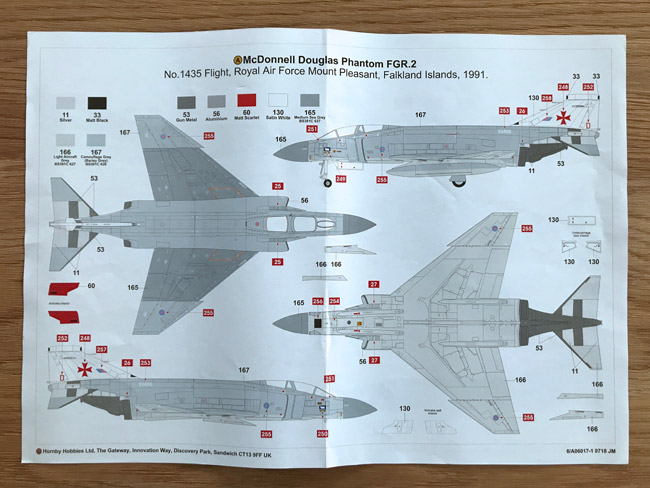 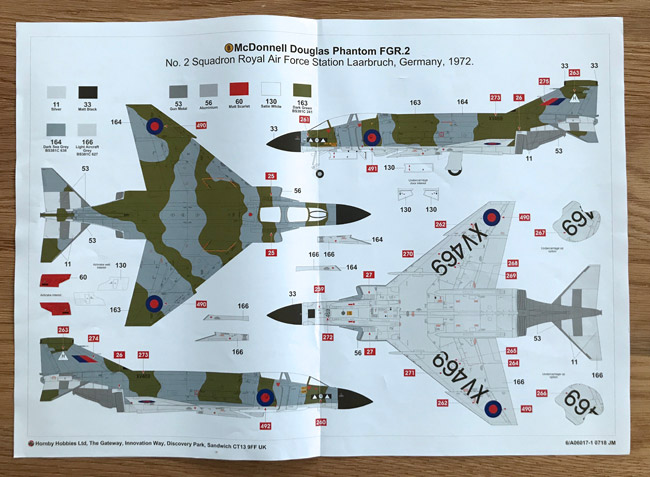 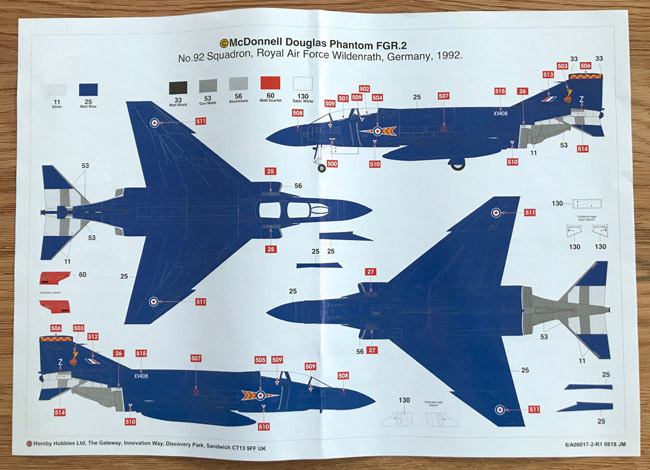 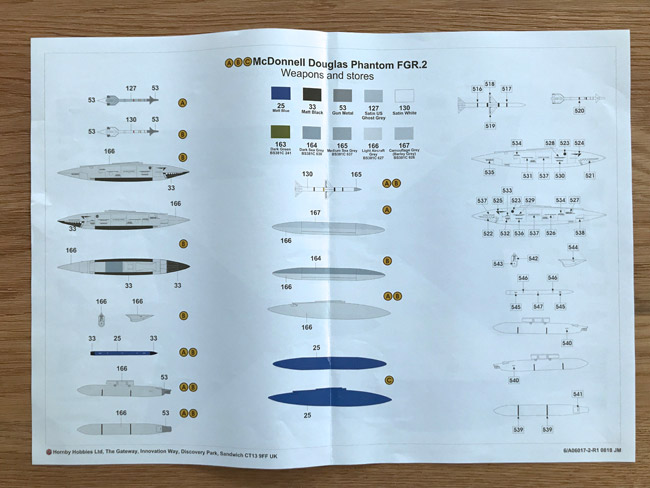 NOTE: Airfix haven’t rectified the grills on top of the main intakes that were missing in the initial FG-1 naval Phantom release and again missing here. That’s a shame, given they are so prominent and really need to be added. We’ll show a work-around in the build when we get there. 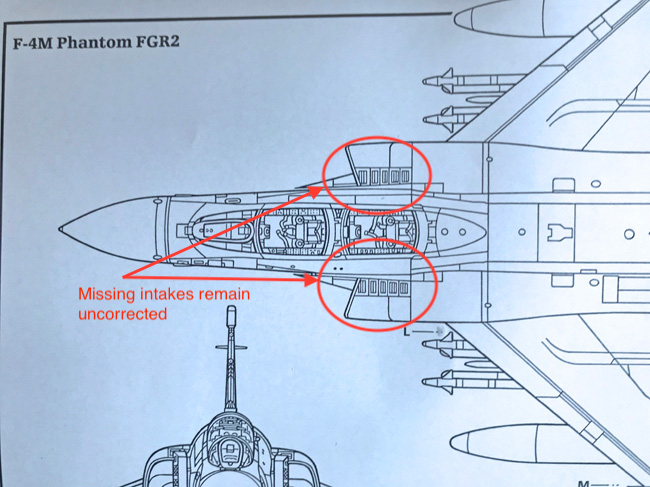 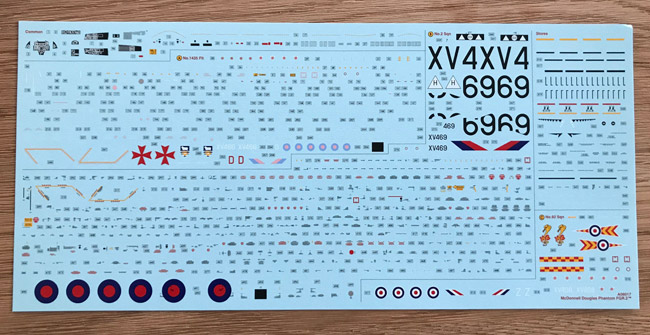 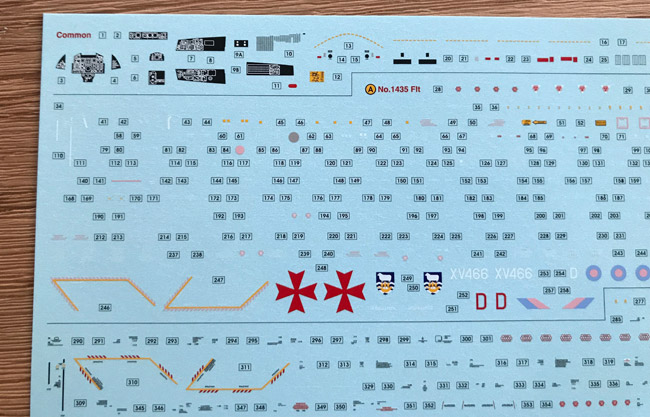 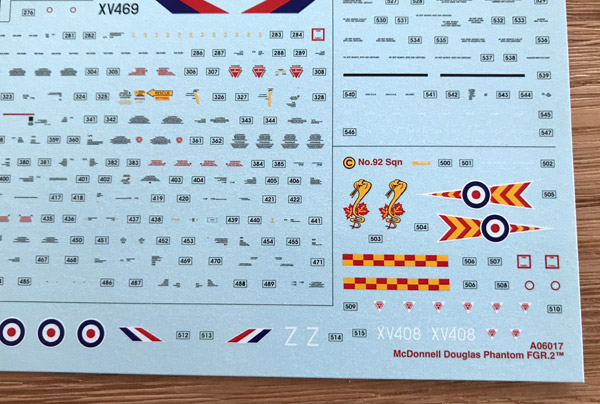 Here’s a little bit about the McDonnell Douglas Phantoms, FG-1 and FGR-2…

The United Kingdom operated the McDonnell Douglas F-4 Phantom II as one of its principal combat aircraft from the 1960s to the early 1990s. The UK was the first export customer for the Phantom, which was ordered in the context of political and economic difficulties around British designs for the roles that it eventually undertook. The Phantom was procured to serve in both the Fleet Air Arm and Royal Air Force in several roles including air defence, close air support, low-level strike and tactical reconnaissance.

Although assembled in the United States, the UK’s Phantoms were a special batch built separately and containing a significant amount of British technology as a means of easing the pressure on the domestic aerospace industry in the wake of major project cancellations. Two variants were initially built for the UK: the F-4K (FG-1) variant was designed from the outset as an air defence interceptor to be operated by the Fleet Air Arm from the Royal Navy’s aircraft carriers; the F-4M (FGR-2) version was procured for the RAF to serve in the tactical strike and reconnaissance roles. In the mid-1980s, a third Phantom variant was obtained when a quantity of second-hand F-4J aircraft were purchased to augment the UK’s air defences following the Falklands War.

The Phantom entered service with both the Fleet Air Arm and the RAF in 1969. In the Royal Navy it had a secondary strike role in addition to its primary use for fleet air defence, while in the RAF it was soon replaced in the strike role by other aircraft designed specifically for strike and close air support. By the mid-1970s it had become the UK’s principal interceptor, a role in which it continued until the late 1980s. 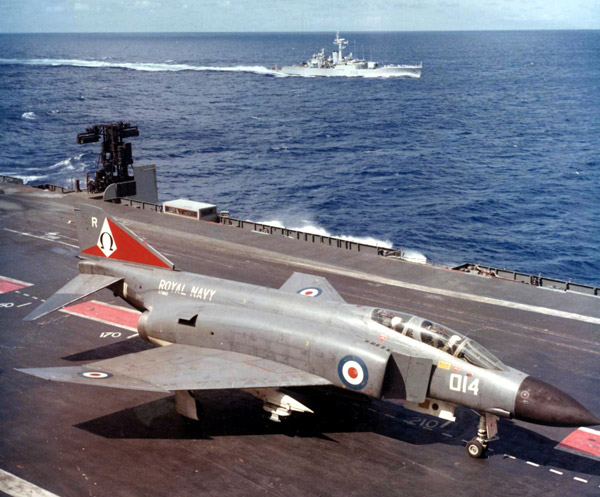 In 1964, 140 new-build Phantoms were ordered for the Fleet Air Arm to serve as the Royal Navy’s primary fleet air defence aircraft, with a secondary strike capability. These were procured to replace the Sea Vixen then in service in the role, with the intention that they operate from the decks of four brand new or modernised aircraft carriers.At the time, the Royal Navy’s carrier force consisted of five fleet or light fleet carriers of differing sizes and ages. Of the five in service, only Eagle and Ark Royal, each displacing approximately 50,000 tons, were big enough to accommodate the Phantom in sufficient numbers, so plans were put in place to rebuild the two ships to enable the operation of the aircraft.

Following the cancellation of the planned refit of HMS Eagle to allow her to operate the Phantom, a total of 20 airframes that had originally been ordered for the Fleet Air Arm were diverted to the Royal Air Force to serve in the air defence role. At the time, the RAF’s primary interceptor was the English Electric Lightning, which suffered badly both in terms of range, loiter time and weapons fit, all of which hampered its effectiveness, especially in long interceptions of Soviet Air Forces and Soviet Naval Aviation bombers and reconnaissance aircraft over the North Sea and North Atlantic. So a new Phantom squadron was formed at RAF Leuchars, the UK’s most northerly air defence base at the time, to take advantage of the improvements that the Phantom provided over the Lightning – it could carry more fuel, and could thus fly further for longer; it was fitted with a more powerful radar; and it could carry more missiles (up to 8, compared to 2 for the Lightning). On 1 September 1969, 43 Squadron was formed at Leuchars, operating as part of the UK’s northern QRA zone alongside the Lightnings of 11 Squadron and 23 Squadron until, in 1972, 11 Squadron was redeployed to join 5 Squadron at RAF Binbrook and was replaced by the Royal Navy Phantoms of 892 Naval Air Squadron. 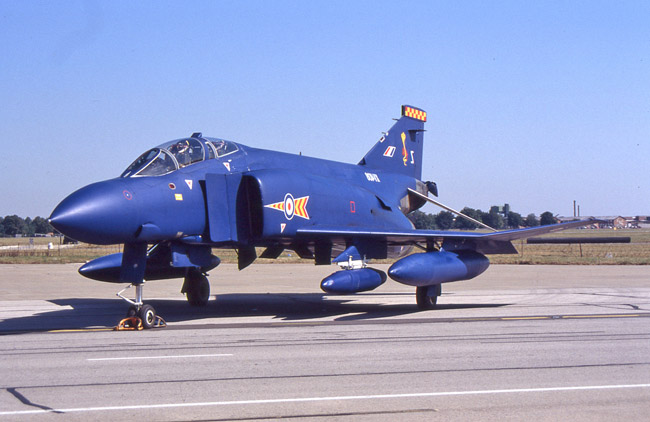