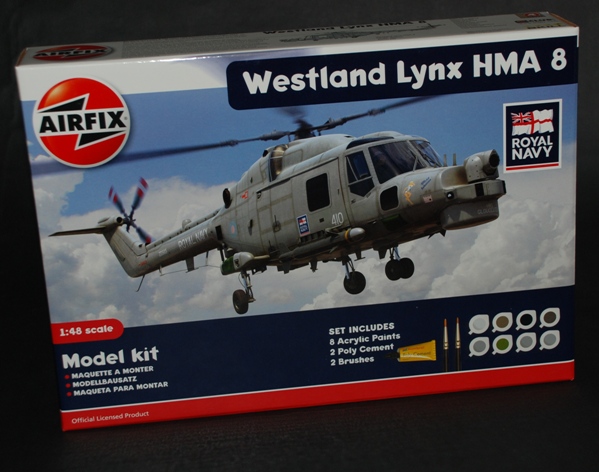 A couple of bits to get you in the mood…!

Ok, this is it…the third and final release from Airfix in their 1:48 Westland Lynx trio – the Royal Navy HMA 8. Extensive comments are available about the other two releases (Mk.88A &  AH-7) in Here Now, so it’s worth reading this review in conjunction with those.

There are a few images of the Westland Lynx AH-7 in that review; here’s some more of Jamie’s ‘Evelyn’ to get you started…

The Kit: Overview and Initial Impressions

All three of these Airfix kits have landed in our office together and here I want to look at the Westland Lynx HMA 8, which is bound to be very popular with modellers especially those from the UK, given that one Royal Navy machine is offered on the decal sheet.

These are particularly interesting, not only because of his modelling ability, but also the fact that he flies the Westland Lynx operationally! Sadly, another publication will have Jamie’s Lynx build, but we will have 3 of our own.

“Seeing the Lynx AH.7 has been so ably covered already, I will stick to the differences offered by Airfix in the Navy version however before I do, some background.

Many of you may know the Lynx is a very special part of me, in that I have spent 1000 hours flying them off ships in the Royal Navy. I have flown into some exotic and not so exotic places around the world and have conducted many Maritime Security Operations and Counter Piracy ops in them.

So when Airfix announced they were to produce a kit of my beloved helicopter, I was keen to help out in any way I could to help the team make the best quality product they could.

I helped host Simon and the other designers at Yeovilton when they came to measure up and, purely in the interests of self, passed on photos and scans of the markings for Evelyn, my aircraft.

To say I am excited that they chose Evelyn as one of the options is a bit of an understatement to say the least! (Offered in the boxing of the Westland Lynx Mk.88A, HMA 8, Mk.90B).

As you no doubt have read, this kit is highly detailed both inside and out, but let’s have a look at the differences.

First off all the lumps and bumps are there to make a Danish or German Lynx, plus the RN Mk 8 SRU version. That is to say it is a Saturn Radio Upgrade, which is the moniker for the mid-life upgrade and therefore is quite a bit different inside and out from the Mk 8 DSP which preceded it.

The sponsons are very well done, having the same fine rivet detail as the rest of the airframe. The weapons are very comprehensive; you get Skua anti ship missiles, Stingray torpedoes, depth charges and a nicely moulded M3M machine gun.

What can I say, I know I am biased but leaving my loyalties aside this is a fantastic kit and right up there with Airfix’s Seafire 47 and Lightning kits.

In fact, I’d go as far as saying this one is ahead by quite some margin and this means it’s Airfix’s best ever kit.”

So, along with Jamie’s glowing assessment, here are my (slightly updated) original comments too, so you have plenty to of info to make your decision.

The box art is very impressive, as are all the box tops for these releases and immediately you can see the differences between the Navalised and British Army versions. These differences are immense, to the point that the HMA.8 for example, almost looks like a completely different aircraft with all its lumps and bumps, not to mention wheels instead of skids!

The box is jammed packed with sprues and so many parts it’s hard to think that they will all be needed. Most will, but there are various options like folded rotor blades and stores that depending on your choice of fit-out may or may not be needed.

Levels of detail, most notably in the cockpit, rotor and inside the main fuselage look stunning.

Included too – and probably accounting for the slightly higher price – is: a cardboard stand, 8 paint pots, glue and two brushes.

Note too the price of this release compared to the British Army AH-7, it’s a little more expensive because of the extra options and accessories (above), and includes: folding rotor blades and rear tail rotor unit, different airframe fit-outs with loads of lumps and bumps and options that add to the parts tally a fair bit.

Nine sprue trees are included (including the clear one) that fairly represents the parts needed to make a model of the Lynx helicopter aircraft in 1:48 scale.

The panel line detail is crisp, recessed with plenty of raised detail typical of the type.

The cockpit has a pair of seats that look quite good, thinly and delicately moulded that feature moulded in seat straps, but if carefully painted should look ok, or, as I suspect, many modellers will shave off and add their own replacements.

The main instrument panels are addressed using decals and I think that is quite acceptable for this scale in my opinion given what you’ll be able to see from the outside looking in.

The seat backs are beautifully moulded with lots of detail and throughout this area you have the feeling that it’s going to look superb when painted and finished.

This is simply excellent – especially that fabric-effect quilted material for the inside walls and ceiling. Add to that the seats, M3M .50 cal MGs and you are going to have a highly detailed interior that will be seen very well through the open doors.

The canopy glazing is clear and blemish-free – another good feature. The clear parts are amongst the clearest I’ve ever seen on a model.

Small holes are present in the top of the main windscreen to allow you to fit the windscreen wipers, another neat touch.

These look pretty accurate, with the complex shape of the main composite blades captured very well with fine edges that will look highly realistic.

Head detail on both the main and tail rotors is excellent and all looks to be very authentic and well researched. A great option to have these folded is included.

The Sea Skua missiles and Stingray torpedoes, MGs and other small details throughout the kit, plus high quality tooling across the board promise much and the opportunity to build more than one Lynx if you decide to acquire further kits.

These look good and high quality including all the stencil markings too. You’ll need to make sure they are applied to a high gloss finish and then applying the varnish tone you want.

Made by Cartograf, these are high quality decals.

An option can be to apply the decals to a gloss finish, then when dry apply a coat of gloss over the dry decals before applying your final varnish – this should ensure the decals look like marking pained onto the surface.

Micro Sol and Set are a must here to make sure the decals conform to the surface and pull down well over all that raised rivet detail.

Classic Airfix fold-out sheet with the usual exploded stage-style diagrams. The stages seem very clear with options applicable to the various aircraft featured on the decal sheet clearly marked so that you end up with an authentic Lynx.

The decal instructions are superb, on colour fold-out sheets with clear, unambiguous location of the main decals and stencils.

As with the other Airfix Lynx models, I’ve got to say I’m impressed; it looks very good and certainly worth the wait.

These kits are all much higher quality than you’d usually expect to find on a model from this manufacturer in this scale. These new models from Airfix is designed for anyone interested in the type and comes with high levels of detail, is accurate and contains great quality decals.

Personally I can’t wait to see how this kit builds up and we have one build about to start in Build Now as I speak!