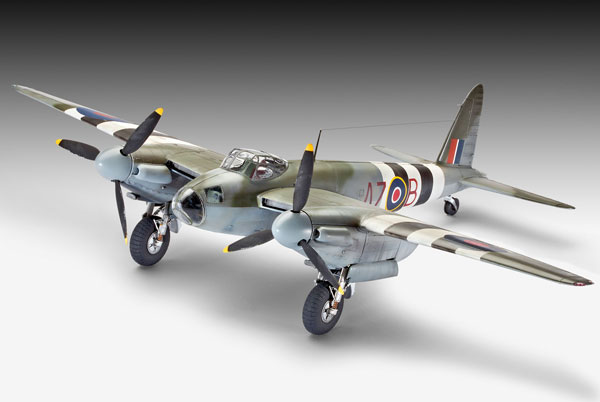 The de Havilland Mosquito will be known to many and here’s just a little background information on the type…
The de Havilland DH.98 Mosquito was a British multi-role combat aircraft with a two-man crew that served during and after the Second World War. It was one of few operational front-line aircraft of the era constructed almost entirely of wood and was nicknamed “The Wooden Wonder”. The Mosquito was also known affectionately as the “Mossie” to its crews. Originally conceived as an unarmed fast bomber, the Mosquito was adapted to roles including low to medium-altitude daytime tactical bomber, high-altitude night bomber, pathfinder, day or night fighter, fighter-bomber, intruder, maritime strike aircraft, and fast photo-reconnaissance aircraft. It was also used by the British Overseas Airways Corporation (BOAC) as a fast transport to carry small high-value cargoes to, and from, neutral countries, through enemy-controlled airspace.

On 21 June 1941 the Air Ministry ordered that the last 10 Mosquitoes, ordered as photo-reconnaissance aircraft, should be converted to bombers. These 10 aircraft were part of the original 1 March 1940 production order and became the B Mk IV Series 1. W4052 was to be the prototype and flew for the first time on 8 September 1941.

The bomber prototype led to the B Mk IV, of which 273 were built: apart from the 10 Series 1s, all of the rest were built as Series 2s with extended nacelles, revised exhaust manifolds, with integrated flame dampers, and larger tailplanes. Series 2 bombers also differed from the Series 1 in having a larger bomb bay to increase the payload to four 500 lb (230 kg) bombs, instead of the four 250 pounds (110 kg) bombs of Series 1. This was made possible by shortening the tail of the 500 pounds (230 kg) bomb so that these four larger weapons could be carried (or a 2,000 lb (920kg) total load). The B Mk IV entered service in May 1942 with 105 Squadron.

Reference
Don’t forget that you have a walkaround set of photos in your SMN Photo Reference Library here on this page.