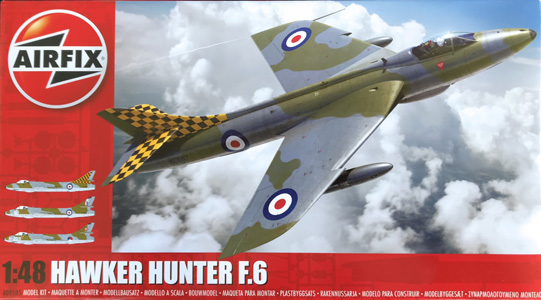 Read the Build Now/Finished Now review of this kit along with several Video Demonstrations.

Well this is certainly very welcome!

An all-new tool Hawker Hunter in any scale is going to make many modellers very happy and when it comes in the very popular 1:48 scale, so much the better. The Hunter is just one of those aircraft that looks great in any scale, unlike some other types that just don’t seem to ‘translate’ well in certain scales.

Until now, we’ve really only had the old Academy Hunter in 1:48 scale and although ok in basic terms, that kit suffered from some annoying flaws like: undersized ejection seat and wheels not to mention an inaccurate tail cone/back end.

So, now we have a new Hunter and given the huge number of overseas operations this kit is going to be a best-seller for Airfix for sure and not just amongst fans of post WW2 RAF types.

The best thing I can do at this point is to take you on a tour of what’s included in the box and make a few observations along the way.

Here’s a look at the three colour schemes offered in the box and varied they certainly are. If you don’t want what’s on offer then turn to the aftermarket decal manufacturers, there are many alternative decal sheets available. 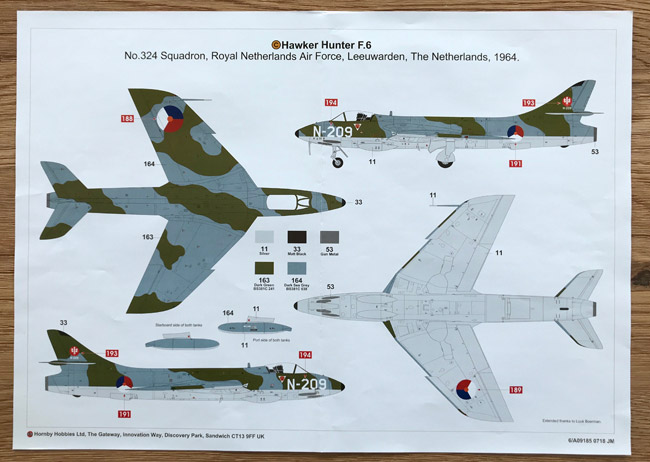 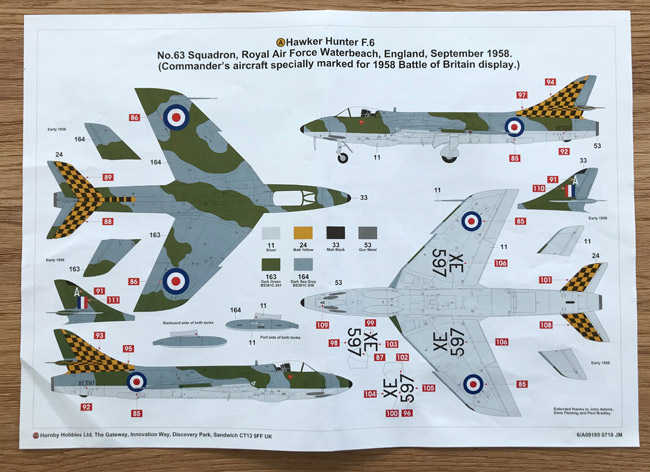 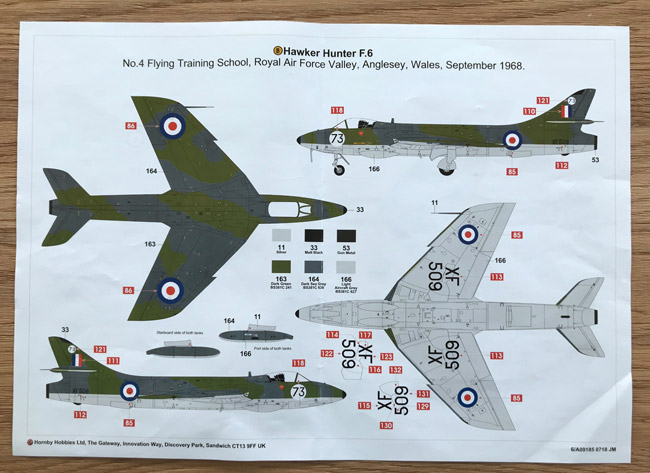 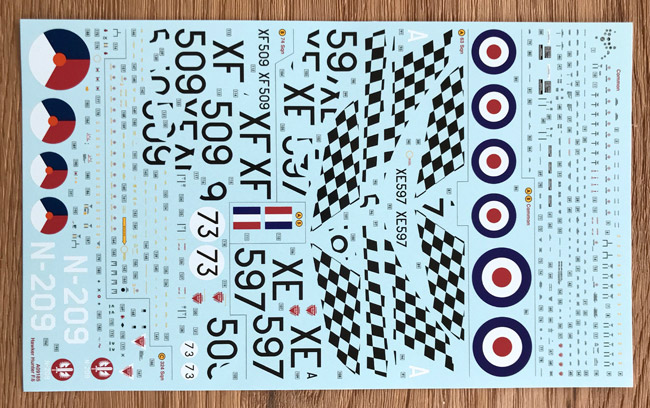 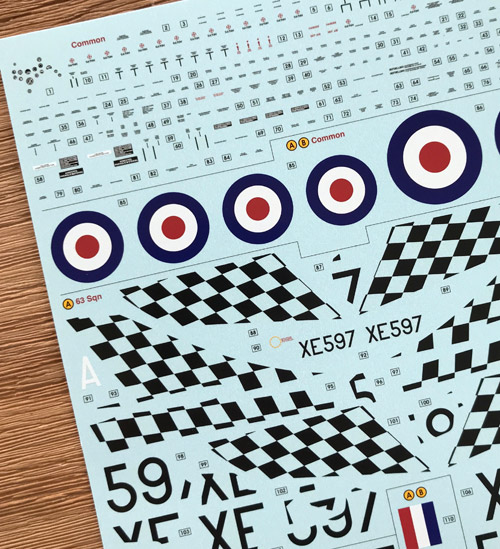 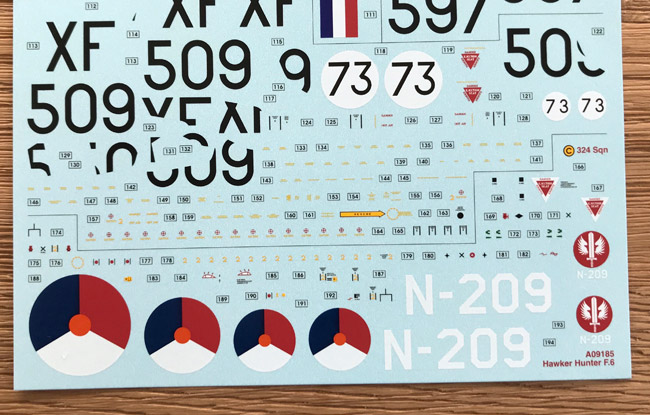 Here’s a little bit of background to the Hawker Hunter and the F.6…

The Hawker Hunter is a transonic British jet-powered fighter aircraft that was developed by Hawker Aircraft for the Royal Air Force (RAF) during the late 1940s and early 1950s. It was designed to take advantage of the newly developed Rolls-Royce Avon turbojet engine and the swept wing, and was the first jet-powered aircraft produced by Hawker to be procured by the RAF. On 7 September 1953, the modified first prototype broke the world air speed record for aircraft, achieving a speed of 727.63 mph (1,171.01 km/h; 632.29 kn).
The single-seat Hunter was introduced to service in 1954 as a manoeuvrable day interceptor aircraft, quickly succeeding first-generation jet fighters in RAF service such as the Gloster Meteor and the de Havilland Venom. The all-weather/night fighter role was filled by the Gloster Javelin. Successively improved variants of the type were produced, adopting increasingly more capable engine models and expanding its fuel capacity amongst other modifications being implemented. Hunters were also used by two RAF display teams: the “Black Arrows”, who on one occasion looped a record-breaking 22 Hunters in formation, and later the “Blue Diamonds”, who flew 16 aircraft. The Hunter was also widely exported, serving with a total of 21 overseas air forces.

During the 1960s, following the introduction of the supersonic English Electric Lightning in the interceptor role, the Hunter transitioned to being operated as a fighter-bomber and for aerial reconnaissance missions, using dedicated variants for these purposes. Two-seat variants remained in use for training and secondary roles with the RAF and the Royal Navy until the early 1990s. Sixty years after its original introduction it was still in active service, being operated by the Lebanese Air Force until 2014.

The Hunter saw combat service in a range of conflicts with several operators, including the Suez Crisis, the Aden Emergency, the Sino-Indian War, the Indo-Pakistani War of 1965, the Indo-Pakistani War of 1971, the Rhodesian Bush War, the Second Congo War, the Six-Day War, the War of Attrition, the Yom Kippur War, and the 2007 Lebanon conflict. Overall, 1,972 Hunters were manufactured by Hawker Aircraft and its successor, Hawker Siddeley, as well as being produced under licence overseas. In British service, the Hunter was replaced in its principal roles by the Lightning, the Hawker Siddeley Harrier and the McDonnell Douglas F-4 Phantom II.
The RAF later received Hunters equipped with an improved Avon engine. The Avon 203 produced 10,000 lbf (44.48 kN) of thrust and was fitted to XF833, which became the first Hunter F.6. Some other revisions on the F.6 included a revised fuel tank layout, the centre fuselage tanks being replaced by new ones in the rear fuselage; the “Mod 228” wing, which has a distinctive “dogtooth” leading edge notch to alleviate the pitch-up problem; and four “wet” hardpoints, finally giving the aircraft a good ferry range. The Hunter F.6 was given the company designation Hawker P.1099.

During the Suez Crisis of 1956, Hunters of No. 1 and No. 34 Squadrons based at RAF Akrotiri in Cyprus flew escort for English Electric Canberra bombers on offensive missions into Egypt. For most of the conflict the Hunters engaged in local air defence due to their lack of range.
During the Brunei Revolt in 1962, the Royal Air Force deployed Hunters and Gloster Javelins over Brunei to provide support for British ground forces; Hunters launched both dummy and real strafing runs on ground targets to intimidate and pin down rebels. In one event, several Bruneian and expatriate hostages were due to be executed by rebels. Hunter aircraft flew over Limbang while Royal Marines from 42 Commando rescued the hostages in a fierce battle. In the following years of the Borneo Confrontation, Hunters were deployed along with other RAF aircraft in Borneo and Malaya.

The Hunter F.6 was retired from its day fighter role in the RAF by 1963, being replaced by the much faster English Electric Lightning interceptor. Many F.6s were then given a new lease of life in the close air support role, converting into the Hunter FGA.9 variant.