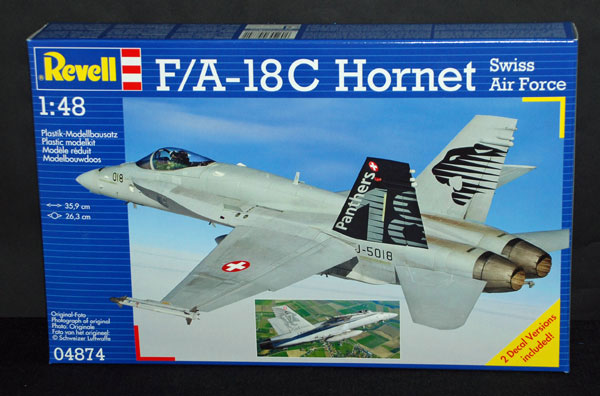 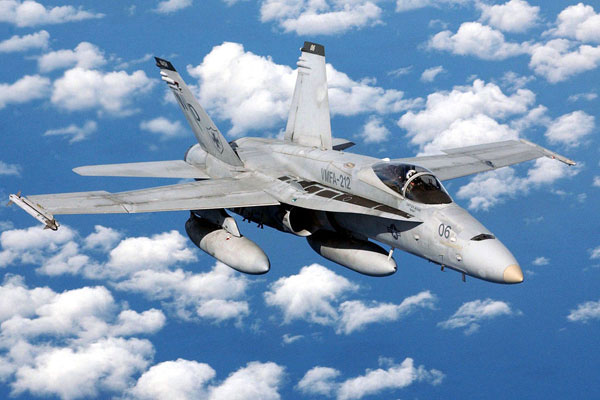 The McDonnell Douglas (now Boeing) F/A-18 Hornet is a twin-engine supersonic, all-weather carrier-capable multirole combat jet, designed as both a fighter and attack aircraft (F/A designation for Fighter/Attack). Designed by McDonnell Douglas and Northrop, the F/A-18 was derived from the latter’s YF-17 in the 1970s for use by the United States Navy and Marine Corps. The Hornet is also used by the air forces of several other nations. The U.S. Navy’s Flight Demonstration Squadron, the Blue Angels has used the Hornet since 1986.

The F/A-18 has a top speed of Mach 1.8 (1,190 mph or 1,915 km/h at 40,000 ft or 12,190 m). It can carry a wide variety of bombs and missiles, including air-to-air and air-to-ground, supplemented by the 20 mm M61 Vulcan cannon. It is powered by two General Electric F404 turbofan engines, which give the aircraft a high thrust-to-weight ratio. The F/A-18 has excellent aerodynamic characteristics, primarily attributed to its leading edge extensions (LEX). The fighter’s primary missions are fighter escort, fleet air defence, Suppression of Enemy Air Defences (SEAD), air interdiction, close air support and aerial reconnaissance. Its versatility and reliability have proven it to be a valuable carrier asset, though it has been criticized for its lack of range and payload compared to its earlier contemporaries, such as the Grumman F-14 Tomcat in the fighter and strike fighter role, and the Grumman A-6 Intruder and LTV A-7 Corsair II in the attack role.

The Hornet saw its first combat action in 1986 during Operation El Dorado Canyon and subsequently participated in 1991Operation Desert Storm and 2003 Operation Iraqi Freedom. The F/A-18 Hornet provided the baseline design for the Boeing F/A-18E/F Super Hornet, a larger, evolutionary redesign of the F/A-18. 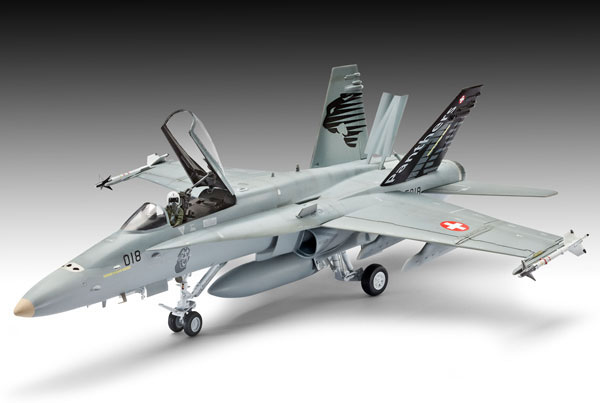 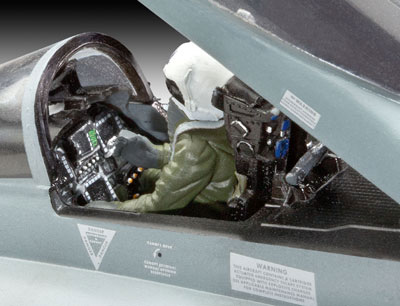 So here we have another re-release from Revell of their 1995 F/A 18C Hornet kit. As you can see from the manufacturer’s photo above, this kit can be made into a presentable model from the box. Having said that, given its age, there are some issues that are apparent like the excessive plastic flash on almost all of the parts that will be laborious to remove. The other fact worth pointing out is that the panel lines are raised and given your view on this that may be an issue; or you could I guess go down the re-scribing route.

Generally the shape looks ok and the horizontal split fuselage join is common for kits of the F/A 18 Hornet. The type has undergone many upgrades and mods over the years it has been in service and I leave it to you to research the exact Hornet aircraft you want to model and see if this offering fits the bill.

You do get a decent pair of AIM-9L Sidewinder AAMs and 4 X bombs (the exact type is unclear to me). A pair of large drop tanks is included and typically carried by the Hornet.

The undercarriage units look pretty well detailed, although, again, that flash will be a pain to remove. Optional open dorsal airbrake is useful and its bay has some internal detail.

Moving onto the cockpit, there is a tub with raised detail and decals are included on the sheet for the main and side panels, although painting the raised detail will probably give a more pleasing end result – your call. The ejection seat is just about acceptable. 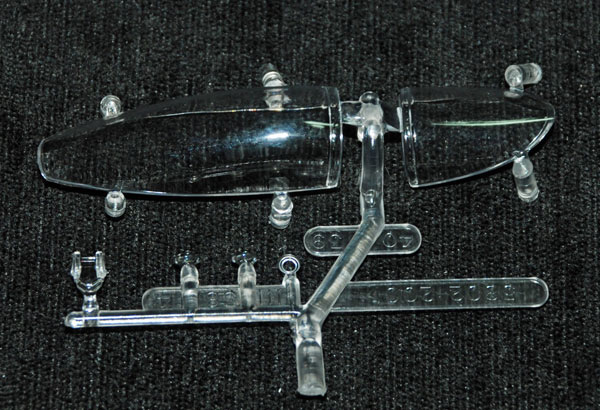 Not bad, but showing their age a little, not as clear and flawless as the clear parts included in new-tool Revell models.

The decals are the best part of this package and a couple of good options is included for Swiss Air Force machines – nice to have something different – something Revell is particularly good at!

Overall not a bad release, the soft detail is not so convincing and the model is showing its age but on the plus side, a perfectly presentable model can be built of the Hornet for not so much money when looking at the options from other manufacturers.
Geoff C.