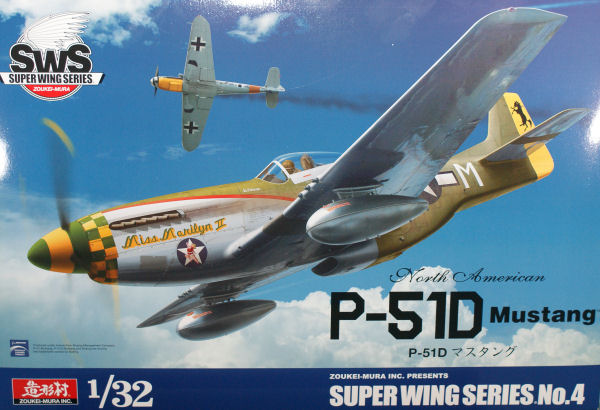 Our thanks to James for purchasing this impressive kit. Find out more about the ZM range of kits and accessories here.

Here’s something to get you going…

When Zoukeimura announced that this will be their next release there was a fair amount of head scratching amongst model builders because Tamiya’s 1:32 Mustang was the best that you could get wasn’t it? Was there still enough room for another 1:32 Mustang and if so what could ZM offer that was different.

Well! Move over Tamiya, You’ve got yourself some competition! ZM’s latest release takes my breath away and makes me want to sweep my builders bench clean with one arm and get cracking. The mouldings are crisp, well defined and there is a wealth of parts that give you many display options including leaving skin panels off to show the interior detail that is included in the kit.

This is a model that will have those builders who pre-ordered and those who buy at retail looking for ZM’s previous releases with mouths producing foam and drooling at the anticipation of their next release. Two of these were delivered by a very wet looking delivery driver.

Let’s start looking at the kit…

The box is quite big and chunky. It is a sturdy one and will provide adequate protection for the plastic inside.
On opening the box everything including decals, instruction book etc. is individually wrapped in plastic with the clear canopy and clear sprue further protected by jiffy wrap. 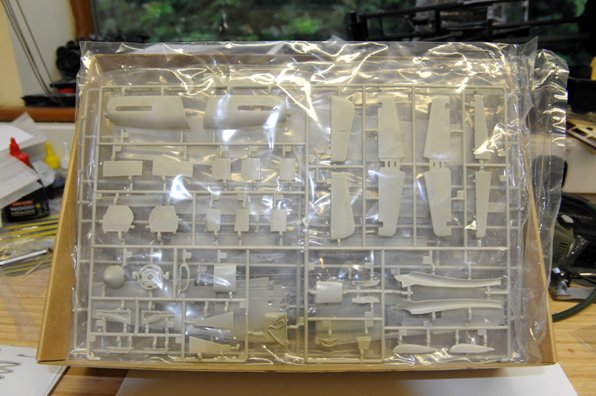 The box is packed full of plastic and on unpacking it you fins that ZM has moulded the parts in not only clear plastic (and it is clear!) but also the aircraft sprues are in 3 different colours: black, a gunmetal grey colour and pale grey. This makes me scratch my head a little and ask why because most modellers who get this will start with their painting and priming and the darker the plastic the harder it is to see where your painting and priming. Never mind as I am sure that there is a good reason and it could be that the instructions seem to be divided into three parts, the engine, the cockpit and interior and the exterior and it seems that the sprues follow this.

The parts are crisp and well formed with stunning detail. Even the engine cylinder case has the cylinders moulded in and a separate cylinder head. This is great as it gives builders more options for dioramas with, for instance, a Mustang with the engine covers off and one of the cylinder heads removed with a mechanic poking about. Let’s take a look at the sprues
[So that you can see the images of the parts/sprues near full screen I am including most below as a Gallery Grid, rather than smaller individual images, then you can read James’s comments relating to each below. Just click on each image to view – Geoff]

Fuel tanks, propeller. Some internal parts and Machine guns and ammo feeds. This sprue is all in black plastic. And the detail is crisp and clear. ZM have an extra option of replacing the MG barrels with brass ones, but more about that later. The MG’s are very well detailed and there is a hole in the barrel end but it doesn’t go in all that far and those who don’t have the Metal barrel replacement set may like to get a drill out and drill down a bit further taking real care. Other than that the MG’s are wonderful mouldings and with the right paint will look just right.

The propeller. ZM have chosen to do this all on one part instead of the hub and separate blades. Again the detailing and casting is first rate but you may need to clean up the prop blade tips. I notice a tiny bit of flashing on mine, but it still doesn’t detract that this part has been well thought out and the blade tips really are thin.

Again in black plastic this sprue covers the engine and wheels. The detail is just so crisp and clear and the engine build is a detailed one that includes as separate parts, ignition lines, oil lines, coolant lines…. Wow. The super-detailer won’t have much to add here!

This holds the majority of the parts for the cockpit and internal detailing and is is a gunmetal grey colour. Again the detail is top rate and the parts are crisp and well formed. The downside of this sprue is the amount of extra nubs and this is because of all the extra detail in there. Really all the extra nubs and sprue bits are no big deal because of the amount of detail they enable ZM to put on. Live with it and don’t moan because I’m not!

Again in gunmetal grey this has more internal detail parts. Like sprue C the parts are crisp and sharp with plenty of detail. For Example, the section on the wing spar where the MG’s and ammunition fit.

These are the outside of the Mustang and the detail is superb.
With the wing sprue I have noticed that in the lower wing panel there are several holes to drill out. The instructions call for two to be drilled out for drop tanks to be used on each wing should you want to put them on but also there are other holes on this part to which there are no reference. A quick search on the net show these to be where rockets could be attached. I have no idea why ZM should do this unless they have another Mustang to offer us at a later date with a rocket option (why not include it in this kit?) or if it was considered at the design stage and not implemented for some reason. Yes, there were lots of different types of armament fitted to Mustangs in the field and I see no reason why a good scratch builder or average skilled modeller couldn’t track down some AM rockets and mounts and fit them.

Maybe even ZM’s own armament pack that was released as an option to the Skyraider could be used in parts on the mustang as they only include the long range fuel tanks with the kit.

All the panel lines and riveting are excellent and restrained. The parts are crisp and sharply moulded and once again are designed to let modellers decide what to put on and what to leave off within reason!

Here is a close up of one of the parts 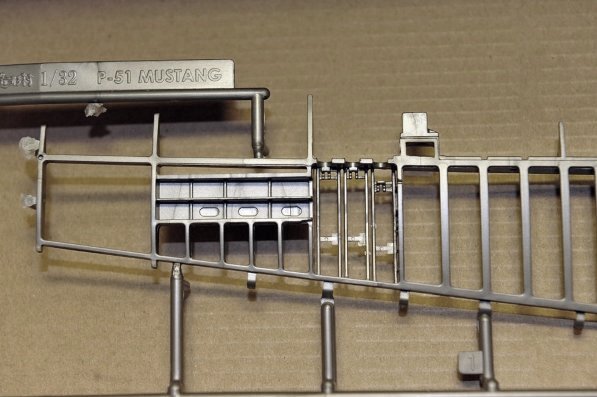 provide more of the external skin of the aircraft and the canopy base.