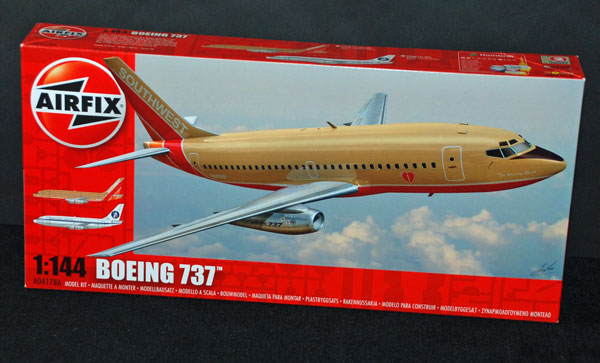 Two things before we get into this review – firstly, come on, who remembers building it first time around? I certainly do and the superb box art featuring that Lufthansa 737 with chrome-like natural metal undersides looked stunning. The build never had as much pleasure as the Boeing 727; I mean the 727 had working rear steps! That I am sure was all just personal taste. Now, both of these kits are now re-released after many years.

The second thing you may be wondering is why review what is essentially a civil airliner in SMN – a military magazine? Well, that’s because a number of air forces around the world have used the type over the years in all kinds of roles, so this Boeing 737 and the 727 that has also just been released are going into SMN.

A little bit about the Boeing 737

The Boeing 737 is a short- to medium-range twinjet narrow-body airliner. Originally developed as a shorter, lower-cost twin-engined airliner derived from Boeing’s 707 and 727, the 737 has developed into a family of nine passenger models with a capacity of 85 to 215 passengers. The 737 is Boeing’s only narrow-body airliner in production, with the -600, -700, -800, and -900ER variants currently being built. A re-engined and redesigned version, the 737 MAX, is set to debut in 2017.

The 737 series is the best-selling jet airliner in the history of aviation. The 737 has been continuously manufactured by Boeing since 1967 with 7,865 aircraft delivered and 3,680 orders yet to be fulfilled as of December 2013. 737 assembly is centred at the Boeing Renton Factory in Renton, Washington. Many 737s serve markets previously filled by 707, 727, 757, DC-9, and MD-80/MD-90 airliners, and the aircraft currently competes primarily with the Airbus A320 family. There are 1,250 Boeing 737s airborne at any given time on average, with two departing or landing somewhere every five seconds as of 2006.

ineteen 737-200’s were used to train aircraft navigators for the U.S. Air Force, designated T-43. Some were modified into CT-43s, which are used to transport passengers, and one was modified as the NT-43A Radar Test Bed. The first was delivered on July 31, 1973 and the last on July 19, 1974. The Indonesian Air Force ordered three modified 737-200s, designated Boeing 737-2×9 Surveiller. They were used as Maritime reconnaissance (MPA)/transport aircraft, fitted with SLAMMAR (Side-looking Multi-mission Airborne Radar). The aircraft were delivered between May 1982 and October 1983

The 737-700C is a convertible version in which the seats can be removed from the aircraft to carry cargo. There is a large door on the left side of the aircraft. The US Navy was the launch customer for the 737-700C, designated C-40A Clipper by the U.S. military. The C-40B and C-40C are used by the US Air Force for transport of Generals and other senior leaders. The Boeing 737 AEW&C is a 737-700IGW roughly similar to the 737-700ER. This is an Airborne Early Warning and Control (AEW&C) version of the 737NG. Australia is the first customer (as Project Wedgetail), followed by Turkey and South Korea.