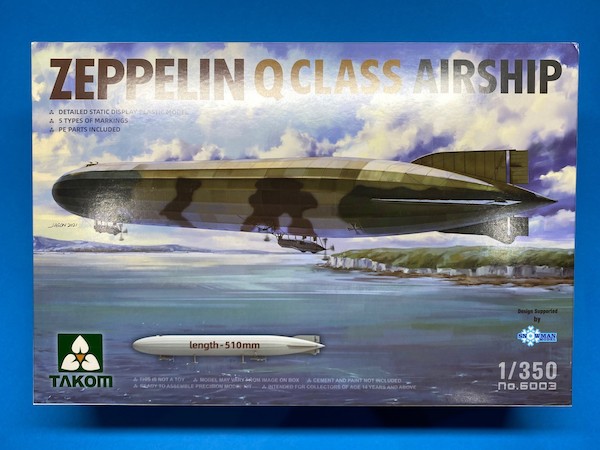 Q class Zeppelins were operated by both the German Army and the Navy. Although the bombing raids are their best-known activity, the majority of the flights made by the naval craft were patrols over the North Sea and the Baltic. The class was obsolete by 1917 and most of the craft that had not been lost to accidents or enemy action had been dismantled by the end of September 1917. The last survivors were LZ 50 (L 16), which had been relegated to training duties and was wrecked at the Nordholz base on 19 October 1917.[5] and LZ 46 (L 14), which carried out 42 reconnaissance missions and 17 attacks on Britain. It survived the war and was destroyed by its crew on 23 June 1919. (Info provided from Wikipedia)

Takom have brought us two flavours of the Zeppelin. The P Class which is shorter and our one I’ll be talking about today, the ‘Q’ class.

The kit comes packaged in a sturdy box measuring 300 x 200 x 75 deep with nice artwork depicting the model in a camo scheme. Don’t let the box lead you to think this is a small kit though. She measures in at 510mm in length.

Upon opening the lid, you are greeted by three styrene runners are cast in a tough mid grey plastic. Each of which is separately bagged. The sprue gates are quite chunky on the larger parts, more refined on the smaller such as the propellers. That said, the location points don’t look like they compromise the part and minimal clean-up will be called for. The castings are very smooth. In addition, a clear runner for the model stands, an etch fret and decal sheet. The instructions are a small booklet, 210 x 140mm consisting of the parts breakdown, 13 construction stages and 5 marking options. Four in linen finish and one camo. (The camo one listed as a ‘what if’ version). The paint callouts refer to the Ammo range of paints. 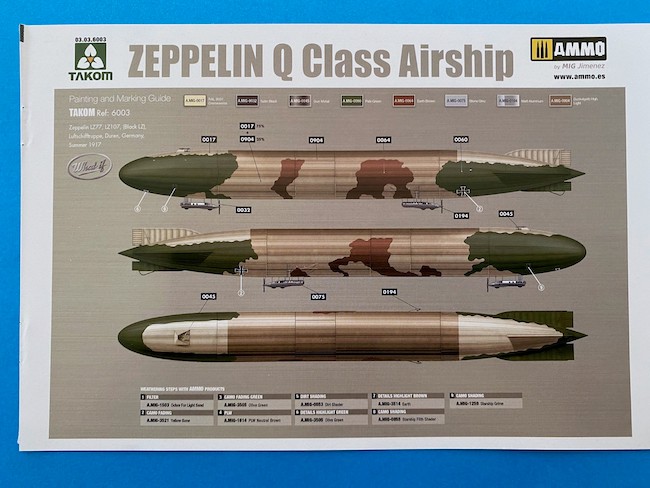 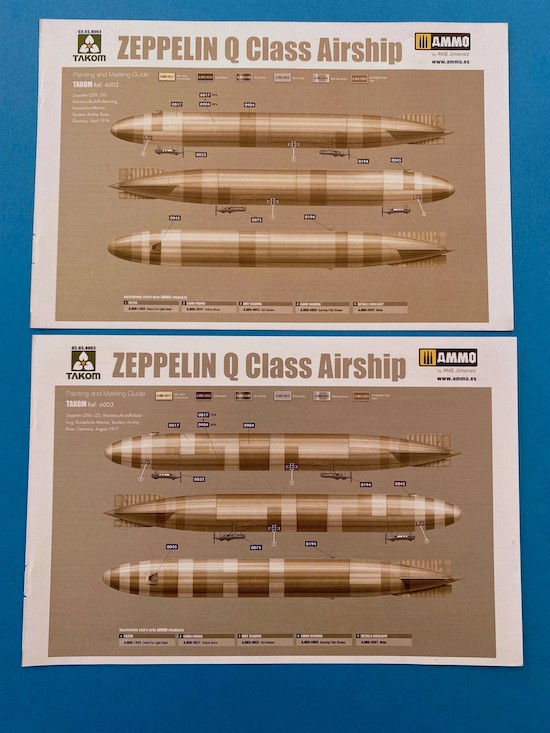 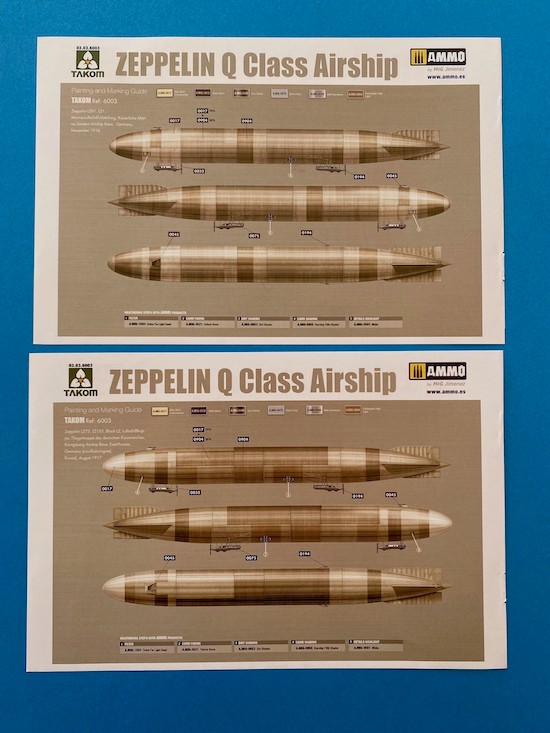 Sprue ‘A’ has the front halves, horizontal stabilisers, and several parts for the gondolas. The fuselage halves are nice and thick so no fears in the strength of the aircraft once assembled. 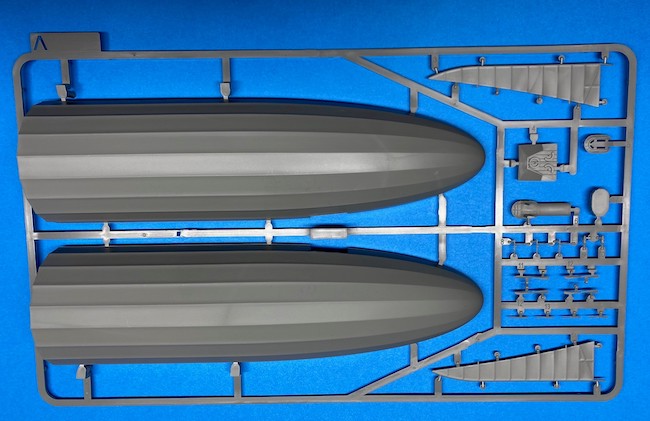 For the stabilisers, the ribbing seemed quite pronounced to me. Now that could be just my opinion, I’m no expert here but bearing in mind the scale, just seems a little too raised. 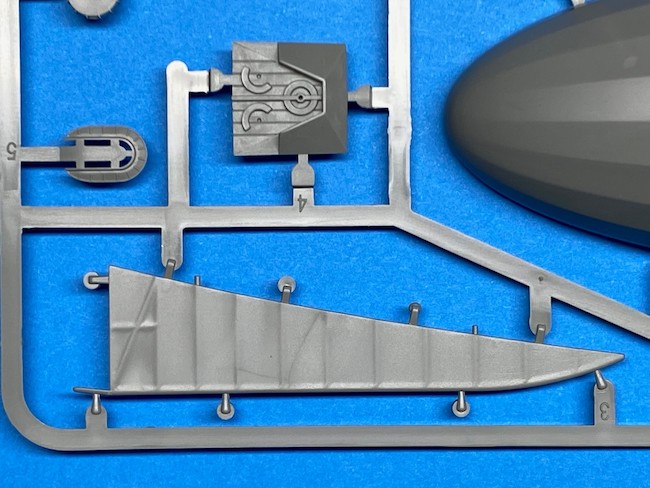 Sprue ‘C’ has just the two rear halves that are a similar thickness the front halves on sprue ‘A’. 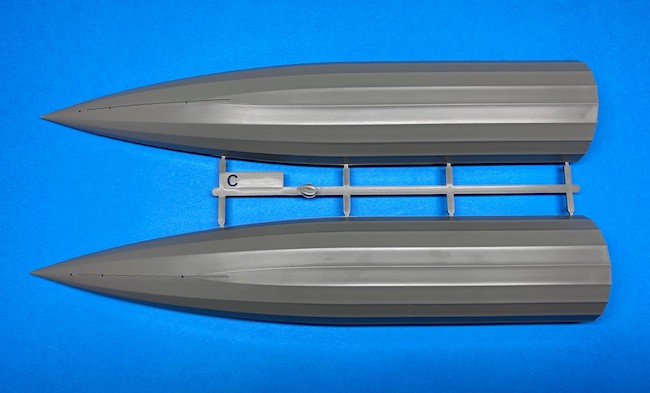 Sprue ‘D’ has the two cradle stands moulded in clear plastic. I’d probably paint mine though with maybe a metallic colour.

Sprue ‘E’ is the additional section which makes this version longer than the P Class. 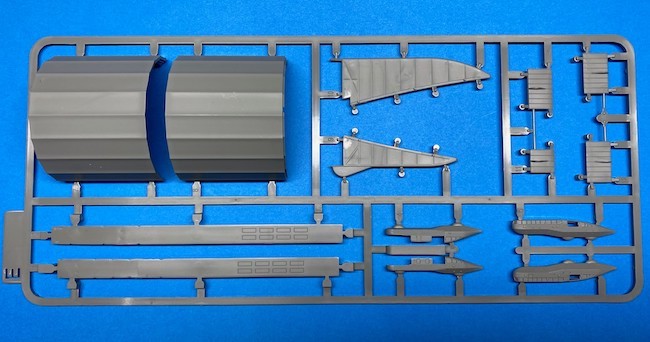 Also included are the tail plains, undersides, and the gondolas. The gondola details look nice too. The glazed panels are however cast in with the main gondola parts. 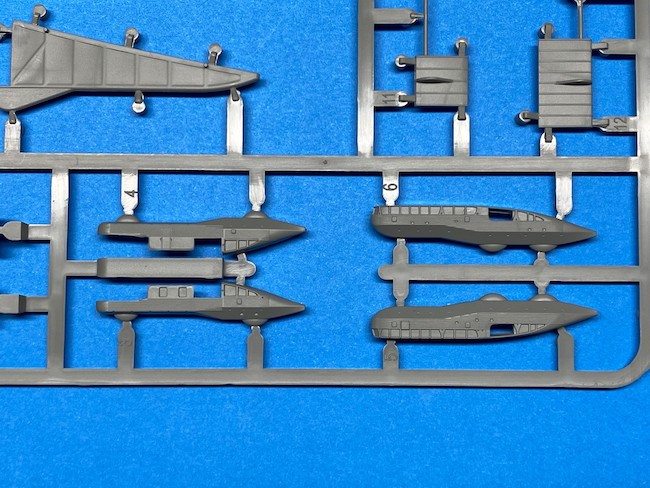 A single etch fret includes 48 pieces which mainly consist of the gondola attachments and supports for the engines. This part of the build should be fun. The parts are attached by very fine location points. The fret itself has an adhesive backing to it. 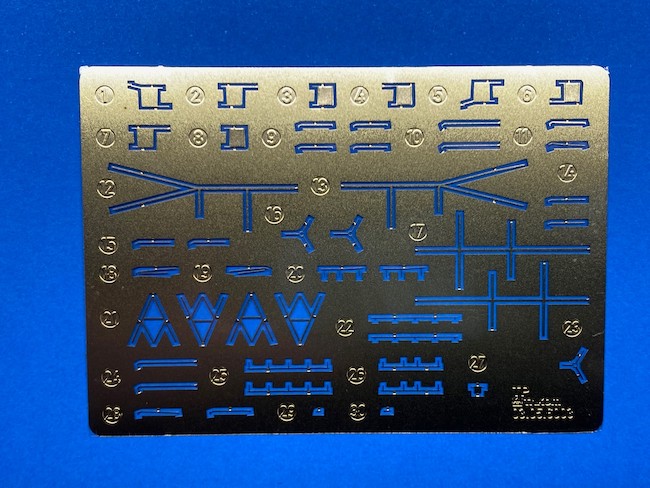 The decals are very straight forward consisting of just the black crosses and serial numbers so no tedious rake of stencils here. They’re nicely printed, have good colour, and feel nice and thin. 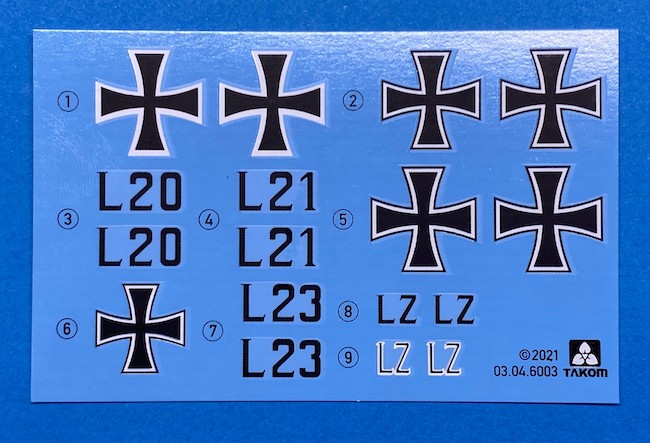 So, my thoughts then. I really like this kit. It’s something completely different, a nice size and I will be piling into it very soon. I think the etch parts will present a challenge particularly when trying to hang the gondolas so some patience will be needed here. (And no coffee for an hour or two beforehand) What I think will be the making of the kit will be in the painting. Trying to replicate the patch work of material is something I’m looking forward too. Add the weathering to that and all being well, it’ll be a great model. Watch this space and I hope to bring the finished article soon.

A final thought from me…

I take my hat off to Takom by going off-piste with their subjects. I built the Yamato turret a year or so ago and really enjoyed it. Take a walk on the wild side and give one of their kits a go if you haven’t before, they’re a lot of fun.

Cheers all for now
Paul O’D.