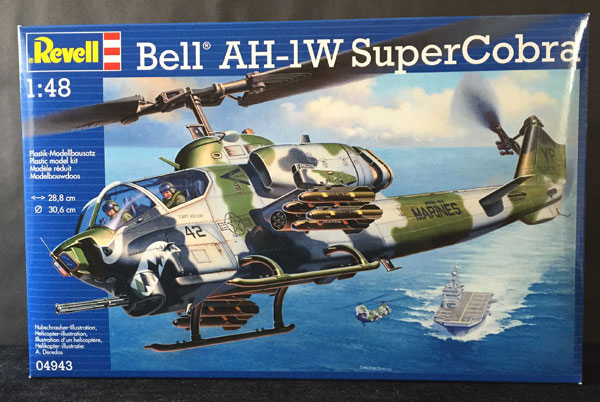 The Bell AH-1 SuperCobra is a twin-engine attack helicopter based on the United States Army’s AH-1 Cobra. The twin Cobra family includes the AH-1J SeaCobra, the AH-1T Improved SeaCobra, and the AH-1W SuperCobra. The AH-1W is the backbone of the United States Marine Corps attack helicopter fleet, but is being replaced in service by the Bell AH-1Z Viper.

The Marine Corps requested greater load carrying capability in high temperatures for the Cobra in the 1970s. Bell used systems from its Model 309 to develop the AH-1T. This version had a lengthened tail boom and fuselage with an upgraded transmission and engines from the 309. Bell designed the AH-1T to be more reliable and easier to maintain in the field. The version was given full TOW missile capability with targeting system and other sensors. An advanced version, known as the AH-1T+ with more powerful T700-GE-700 engines and advanced avionics was proposed to Iran in the late 1970s, but the overthrow of the Shah of Iran resulted in the sale being cancelled.

In the early 1980s, the U.S. Marine Corps sought a new navalised helicopter, but it was denied funding to buy the AH-64 Apache by Congress in 1981. The Marines in turn pursued a more powerful version of the AH-1T. Other changes included modified fire control systems to carry and fire AIM-9 Sidewinder and AGM-114 Hellfire missiles. The new version was funded by Congress and received the AH-1W designation. Deliveries of AH-1W SuperCobras totalled 179 new-built helicopters plus 43 upgrades of AH-1Ts.

The AH-1T+ demonstrator and AH-1W prototype was later tested with a new experimental composite four blade main rotor system. The new system offered better performance, reduced noise and improved battle damage tolerance. Lacking a USMC contract, Bell developed this new design into the AH-1Z with its own funds. By 1996, the Marines were again not allowed to order the AH-64. Developing a marine version of the Apache would have been expensive and it was likely that the Marine Corps would be its only customer. They instead signed a contract for upgrading AH-1Ws into AH-1Zs.

The Bell AH-1Z Viper features several design changes. The AH-1Z’s two redesigned wing stubs are longer with each adding a wing-tip station for a missile such as the AIM-9 Sidewinder. Each wing has two other stations for 70 mm (2.75 in) Hydra rocket pods, or AGM-114 Hellfire quad missile launcher. The Longbow radar can be mounted on a wing tip station. 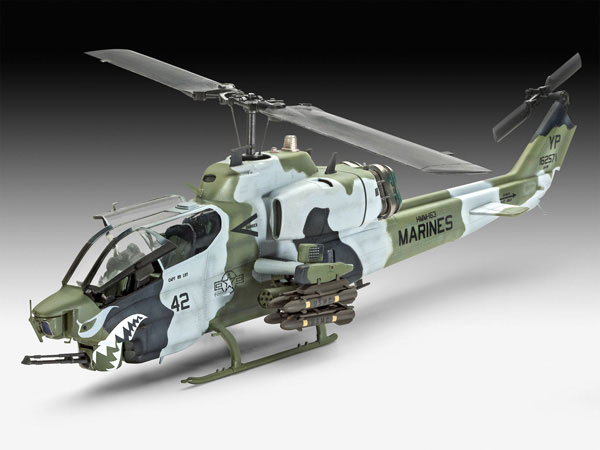 This isn’t a new Revell kit, being first released some years ago but with new decals this time. It is pretty well detailed, has interior details – including the prominent rotary gun beneath the nose and raised interior cockpit detailing. Raised panel lines are evident but these are very restrained and the shape overall looks good.

The grey sprues (including the clear one) look and feel good quality with most parts clean and well-defined but some of the smaller detail like the lap belts on the seats look a little soft and not so well-defined. Here are a few of the manufacturer’s made up model to give you a good idea of what this model can look like – certainly looks like a Bell AH-1W SuperCobra to me!

The Revell box artwork is usually impressive enough and that’s the case here – an image of a SuperCobra peeling away from a carrier.

The grey sprues are packaged well and no damage is apparent. Taking the main components first, they are well tooled, raised panel line detail may not suit everyone but it has a quality feel and is refined. Some of the detail looks a little soft around the edges and unsurprising given the age of this kit. No distortion on the main grey parts was apparent and a dry fit of the main fuselage promises a decent fit; the initial impression is one of a lot of detail parts that will go to make up a nice representative model in 1:48 scale.

Raised detail on the cockpit panels is provided. The other internal details are well detailed too as you can see from the attached photos and will add a fair bit to the eventual look – especially if you open the side windows that is an option.

This area of the model is well dealt with – two detailed rear faces to the engines is there, although the engines themselves aren’t detailed.

Options in your box and includes: 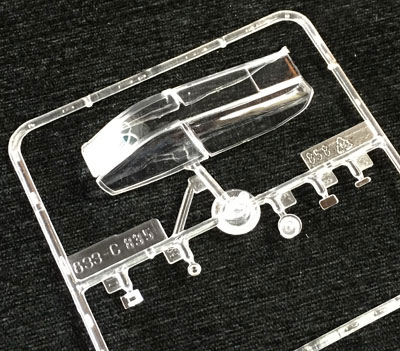 The clear parts look clear although the upper main section of the canopy has a slight ‘wavy’ imperfection on my sample. This may well be a one-off and isn’t too obvious but it’s noted nonetheless. 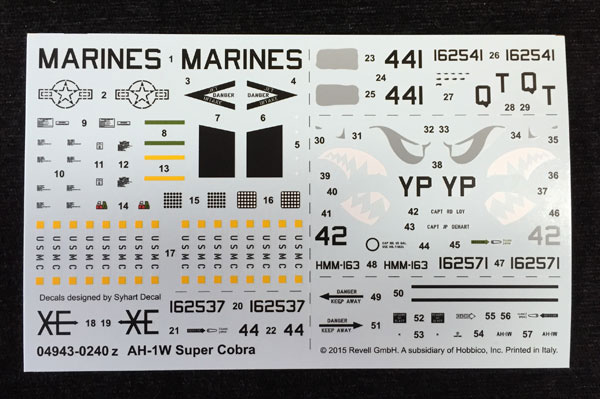 Looking at the manufacturer’s completed model (above) the decals will look good when carefully applied.

This is a great subject and it’s great that it’s back and readily available at the time of writing. This model will provide all military fans, especially those with interest in a US Navy or Marines theme with an opportunity to expand their collection.

The model itself looks to be well engineered from the dry/test-fit. Moulding is good and the raised panel detail ok in my opinion although you may have a different view and feel that a complete panel line re-scribe is justified – your call.
Geoff C.