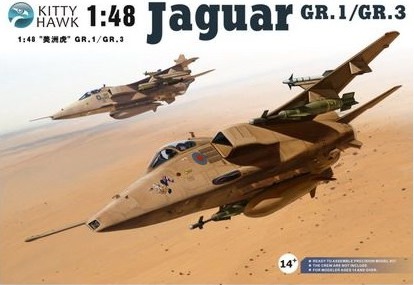 Kitty Hawk are at it again, following on very quickly from last year’s releases of the F35B (which you can see in Finished Now) and the Jaguar A, these folks are continuing to go after the big guys, diving straight into high pressure injection moulded subjects in 1:48 scale. Next out this year is the Saab 39 Gripen and a Mirage F1B is close to release, along with a Mig 25 Foxbat and a Harrier AV8B.

The one I have been waiting for is the Jaguar GR1/3 variant of the Jaguar A kit, hitting the shops in the UK in early June.

As luck would have it an unscheduled visit through Singapore had me wondering into one of my usual model shop haunts, seeing the Jaguar A kits on the shelf a casual enquiry about the GR1/3 kit led to the owner producing the only one he’d received and had reserved for his own stash.

Much discussion ensued and after forking out for a coffee and a donut I departed with the said kit in my sticky paws, a huge smile on my face and already plotting this build. What a result…

I could spend a while detailing out a history of the Jaguar in RAF and foreign service, but to be honest this is best left to those who came before me and there are some excellent sites out there, here’s a couple links:

First introduced in the 1970’s the Sepecat Jaguar was an Anglo/French affair, the airframes were manufactured by SEPECAT (Société Européenne de Production de l’avion Ecole de Combat et d’Appui Tactique), a joint venture between Breguet and the British Aircraft Corporation.

The Jaguar was successfully exported to India, Oman, Ecuador and Nigeria. The aircraft served with the Armée de l’Air as the main strike/attack aircraft until 2005, and with the Royal Air Force until 2007. It was replaced by the Panavia Tornado and the Eurofighter Typhoon in the RAF and the Dassault Rafale in the Armée de l’Air. All the other foreign air forces continue to operate the aircraft.

I have had a long association with this aircraft, in Germany with the RAF at Bruggen and later in Oman during the Gulf War 1, hence my interest in the first new tooling of this iconic strike fighter in 1/48 scale since the original Airfix version of the 90’s and the re-release of a GR1A version in 2007. 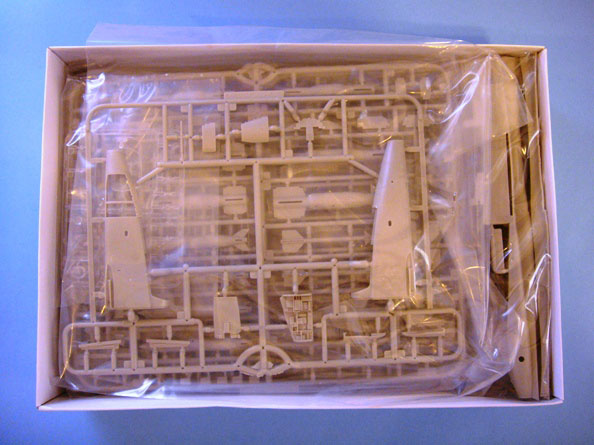 The box art is impressive, a pair of GR3 over a desert scene, with the distinctive Gulf War nose art prominent.

What appears to be quite a deceptively small box for a 1:48 scale kit is just packed with plastic. 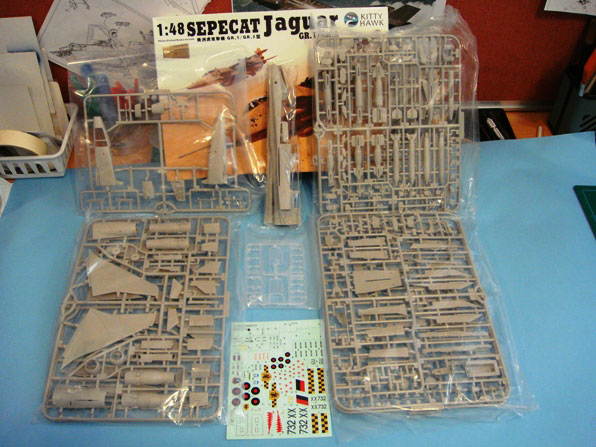 What’s inside the box

Inside our sturdy tray & lid type box the kit parts come prepackaged in clear plastic bags, a set of detailed instructions with an integrated colour guide/decal chart for both the airframe and the weapons, a small fret of PE and a set of applicable decals for three different examples.

Molded in light grey styrene this is a vast improvement of the dark grey used in the F-35B kit, which gave me some concern in the build. The plastic this time feels much better quality.

Once again Kitty Hawk have gone overboard with available options with detailed cockpit for early and late models, positionable doors and panels, speedbrakes, spoilers, leading and trailing edge flaps and rudder. The gun doors can be opened and expose the Aden cannon and some panels are positionable to expose the avionics and engines should you so choose.

The kit also provides a generous selection of weapons, however disappointingly these are mostly French stores from the A kit.

The parts are individually numbered and are located on 7 letter coded sprues D thru J. Assuming the two larger individual fuselage halves are A and B, sprue C seems to be missed and D is the next in line. The sprues are not logically arranged and don’t group common parts together, apart from the weapons on E & F.

Sprue gates are reasonably thin and are well positioned on seams where they won’t be seen and aid for minimal cleanup.

Let’s look at some of the detail; the main fuselage comes in two halves, nicely detailed with engraved panel lines and opened up for the multitude of bays to be fitted. Until you fit these the airframe is quite flexible, very similar to the F-35B construction, however I know this works and with the option of open panels to expose the various bays, this is a super detailers dream.
The front half of the fuselage is another two halves, just look at the panel line detail, lovely?? Checking my references it all looks pretty accurate too.

The smaller parts do not lack detail either, the cockpit bulkhead has some nice raised detail which will look great with a wash to highlight.

The ejection seat is multi part and again nicely detailed. You get the choice of the A seat or the RAF Mk.7 Martin Baker, I assume to ease molding, so make sure you choose the right one. The PE fret includes a set of straps.

The avionics bay is also nicely detailed, add a few wiring looms and this will end up as a focus point on the completed model if you pose the panel open.