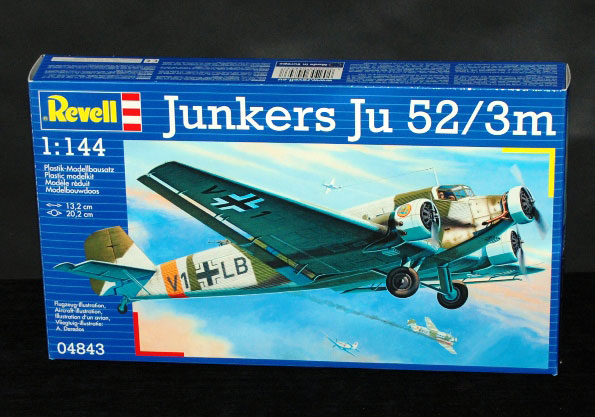 A little bit of nostalgia here… 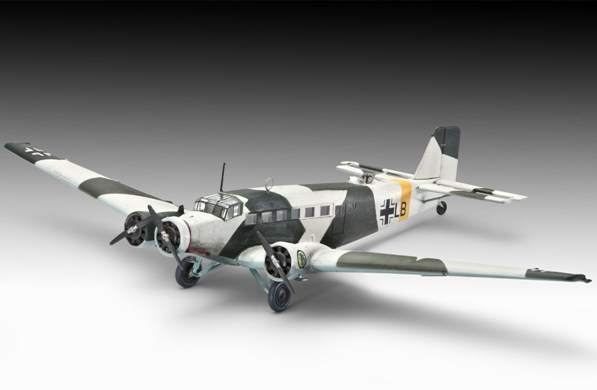 The Junkers Ju 52 (nicknamed Tante Ju (“Auntie Ju”) and Iron Annie) was a German trimotor transport aircraft manufactured from 1932 to 1945. It saw both civilian and military service during the 1930s and 1940s. In a civilian role, it flew with over 12 air carriers including Swissair and Deutsche Luft Hansa as an airliner and freight hauler. In a military role, it flew with the Luftwaffe as a troop and cargo transport and briefly as a medium bomber. The Ju 52 continued in postwar service with military and civilian air fleets well into the 1980s.

In its original configuration, designated the Ju 52/1m, the Ju 52 was a single-engined aircraft, powered by either a BMW or Junkers liquid-cooled engine. However, the single-engine model was underpowered, and after seven prototypes had been completed, all subsequent Ju 52s were built with three radial engines as the Ju 52/3m (drei motoren – “three engines”). Originally powered by three Pratt & Whitney Hornet radial engines, later production models mainly received 574 kW (770 hp) BMW 132 engines, a license-built refinement of the Pratt & Whitney design. Export models were also built with 447 kW (600 hp) Pratt & Whitney Wasp R-1340 and 578 kW (775 hp) Bristol Pegasus VI engines. The two wing-mounted radial engines of the Ju 52/3m had full-chord cowlings and were noticeably toed-out, from being mounted at an almost perpendicular angle to the wing’s tapered leading edge. The central engine had a half-chord cowling like a Townend ring as the fuselage behind it was increasing in diameter, though some later aircraft had deeper cowlings. Production Ju 52/3m aircraft flown by Luft Hansa before World War II, as well as Luftwaffe-flown Ju 52s flown during the war, usually used an air start system to turn over their trio of radial engines, using a common compressed air supply that also operated the main wheels’ brakes.

This isn’t in fact a Revell kit at all, but the Eduard kit re-released as a Revell boxing but with new decals. It is quite nice to have a model in 1.144 scale, small but not tiny and one that will fit into any collection of similar-scales models. The shape looks pretty accurate with new decals for two Luftwaffe aircraft.

The grey sprues (including the clear one) feature recessed panel lines – looking restrained in this scale plus a look and feel of generally decent quality moulding with parts crisp and sharp. The design of the Ju 52 and that corrugated effect is also well captured

The Revell box artwork is usually impressive enough and that’s the case here – an image of a Ju 52 in a striking scheme climbing away after takeoff looks impressive.

The grey sprues are packaged well and no damage is apparent. Taking the main components first, they are pretty well tooled, recessed panel line detail is a bit heavy although much of this is on the underside and won’t be visible anyway. There is flash on a number of parts but this should clean off easily enough. No distortion was apparent and a dry fit of the main fuselage promises a decent fit; the initial impression is one of a simple kit that any modeller, whatever their level experience should be able to construct without difficulty.

Decals are available on the decal sheet to add to the main instrument panel in the cockpit, and, to be honest, I think this is perfectly acceptable in this scale. The other internal details like the cabin bulkhead and control column are ok and will give enough life to this area to do the job in this small 1.144 scale.

The tri-motor set up for the Junkers Ju 52 is renowned and the engine faces have just enough detail to be convincing.

These items look a little flimsy and have some sink marks and flash to deal with but will hopefully look fine when cleaned up.

This is a good subject and will provide all 1.144 scale modelling fans with an opportunity to expand their collection. The model itself looks to be pretty well engineered from the dry/test-fit. Moulding is ok albeit oversize for the scale.
Geoff C.