Before I kick off a quick word of thanks to Graham at Relish Models who kept me informed of this kit in its release to sale. No sooner had it arrived Graham called me and the next day it was in my hands. A fantastic service and one I can personally recommend.

I can’t say that I was champing at the bit for a Sunderland model nor was I looking to build another aircraft. But come on this is a flying boat and when I heard the kit was for imminent release said to Geoff that one is mine… please!

It was, and is to my mind, a stunning aircraft and if you ever get the chance to walk around the beautiful example at the RAF Museum in Hendon, do so it’s simply great. If you don’t, have a look at the walk through video above and you will see what I mean. The Sunderland’s bulk is a thing of majesty and is even today at first sight something any aircraft enthusiast cannot ignore. For me it gets to me as an aircraft and as a boat and I will be able to exercise the techniques I have used in both genres in SMN on one subject; I can’t wait. Indeed, I will be putting aside my 1:400th scale Jeanne d’Arc French Navy Helicopter Cruiser to get on right away with the build of this kit.

Before then, I have to confess that I have a personal link, by marriage at least, to the Sunderland. My late father-in-law, John Jones, served his apprenticeship with Short Brothers at Rochester in Kent. He was involved with building the prototype in 1937 and many of the production versions that followed from the same plant. Below is a photograph of his indentures which in themselves are of some historic importance to me at least. Interestingly I have another more esoteric connection to the Sunderland. My son is currently in the Gambia running a programme for deaf people and particularly deaf children. Interestingly one of the decal options in the kit is for a 204 Squadron Aircraft based at Bathurst (now Banjul) in the Gambia. This aircraft serial number T 9072 was built by Short Brothers in Rochester so was built by my son’s late grandfather. It is the option I will build. 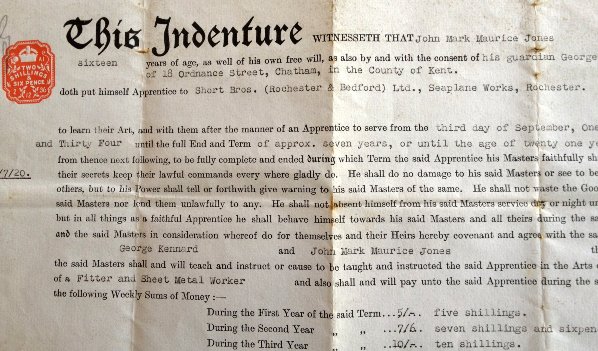