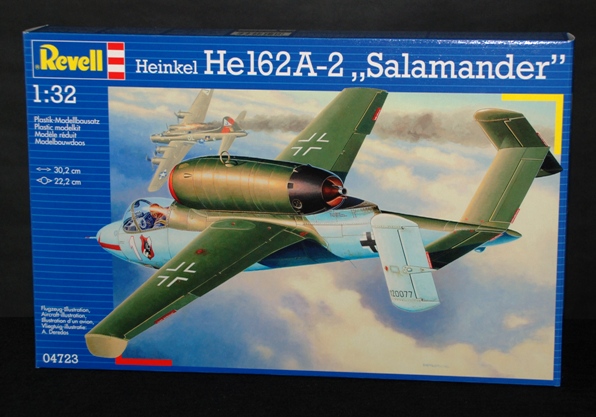 The Heinkel He-162 Volksjäger (or ‘People’s Fighter’) was a German single seat jet fighter. Designed late in the war and moving extremely quickly from concept to initial production; it was produced using the war materials that Germany had available… Hence wood was used for the majority of this aircraft; this aside the He-162 or Salamander was one if not the fastest first generation jet fighters.

On a historical note, the He-162 was also planned to be used as a control aircraft for a Mistel, this however didn’t get passed the design stage. (Les Venus has produced this kit in its Mistel configuration and it does look impressive).

One thing to note… Originally produced in 2004 this boxing is a re-release of the original, with no modifications to the kit.

The kit arrives in the usual Revell side opening box, which contains one clear sprue and four light grey sprues. All five sprues have minor flash around some of the components, nothing to put you off the kit, just a very minor inconvenience. Detail on the model is crisp and well represented with recessed panel lines. The cockpit has some nice raised details in the side consoles as does the undercarriage bays. My only real issue with this review are the transparencies, which on this sample appear to have dirt IN the clear plastic…. Somebody at Revell didn’t wash their hands properly when they set the machine up!! With no aftermarket canopy available, you would either have to talk to Revell about a replacement, or pretend it’s not there.

The instructions are the usual Revell A4 sized pages which cover the build in a grand total of 42 steps (excluding paint). They are clear and show exactly what the modeller will need, calling out colour numbers as required; which brings me to the only gripe with the instructions. Revell seem to think that modellers like mixing paints to achieve standard RLM colours, having reviewed a couple of revel kits in the past, this is a common theme, and really could do with being addressed.

The decal sheet comprises of a generic set of markings, with codes for either White 1 or White 5 both of which were based at Leck in 1945. Both of which have different colour schemes. The decals themselves look really nice, and if I could read German I’m sure I could understand what the warnings actually mean. Whilst they don’t look too thick on the carrier film, and have good solid appearance and good register; the only omission to the decal sheet is a pair of swastikas for the tail fins, which again is a Revell ‘norm’. However I reserve judgement to criticise the decals after they are on the finished model.

Overall an excellent kit, it can be built out of the box with minimal extra effort, or for those of you out there that like the super detailing sets there are many available. An interesting subject, well represented in 1:32, and with change from £20 you really can’t go wrong.

Most definitely recommended…
Mat B.