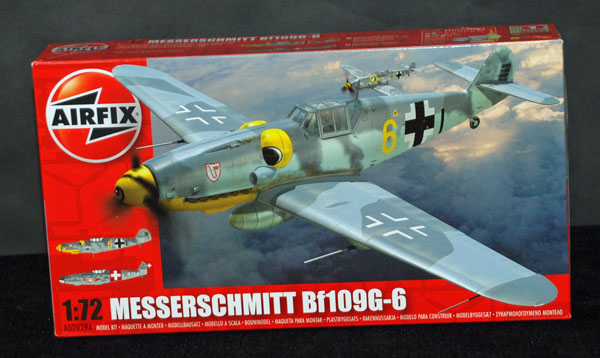 Our thanks to Airfix for supplying our review sample. Get this kit here now at www.airfix.com

The Messerschmitt Bf 109, sometimes incorrectly called the Me 109 (most often by Allied pilots and aircrew), was a German World War II fighter aircraft designed by Willy Messerschmitt and Robert Lusser during the early to mid-1930s. It was one of the first truly modern fighters of the era, including such features as all-metal monocoque construction, a closed canopy, a retractable landing gear, and was powered by a liquid-cooled, inverted-V12 aero engine.

The Bf 109 first saw operational service during the Spanish Civil War and was still in service at the dawn of the jet age at the end of World War II, during which time it was the backbone of the Luftwaffe’s fighter force. From the end of 1941 the Bf 109 was supplemented by the Focke-Wulf Fw 190.

Originally conceived as an interceptor, later models were developed to fulfil multiple tasks, serving as bomber escort, fighter-bomber, day-, night-, all-weather fighter, ground-attack aircraft, and as reconnaissance aircraft. It was supplied to and operated by several states during World War II, and served with several countries for many years after the war. The Bf 109 was the most produced fighter aircraft in history, with a total of 33,984 airframes produced from 1936 up to April 1945.

The Bf 109 was flown by the three top-scoring German fighter aces of World War II, who claimed 928 victories among them while flying with Jagdgeschwader 52, mainly on the Eastern Front, as well as by Hans-Joachim Marseille, the highest scoring German ace in the North African Campaign, scoring 158 victories. It was also flown by several other aces from Germany’s allies, notably Finn Ilmari Juutilainen, the highest scoring non-German ace on the type with 58 victories flying the Bf 109G pilots from Italy, Romania, Croatia, Bulgaria and Hungary. Through constant development, the Bf 109 remained competitive with the latest Allied fighter aircraft until the end of WWII. 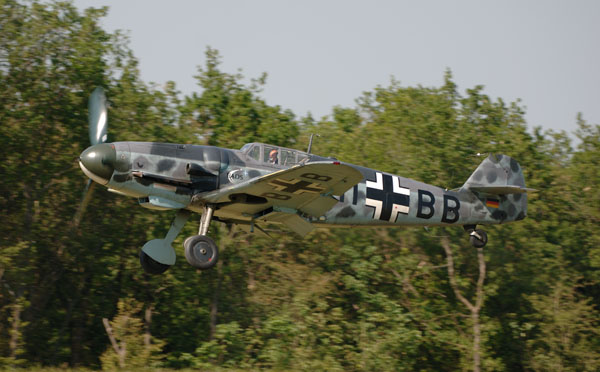 The G series, or “Gustav”, was introduced in mid-1942. Its initial variants (G-1 through G-4) differed only in minor details from the Bf 109F, most notably in the more powerful 1475 PS (1,455 HP) DB 605 engine. Odd numbered variants were built as high-altitude fighters with a pressurized cockpit and GM-1 boost, while even numbered variants were non-pressurized, air superiority fighters and fighter-bombers. Long-range photo-reconnaissance variants also existed. The later G series (G-5 through G-14) was produced in a multitude of variants, with uprated armament and provision for a number of kits of pre-packaged, generally factory- installed parts known as Umrüst-Bausätze (usually contracted to Umbau) and adding a “/U” suffix to the aircraft designation when installed. Field kits known as Rüstsätze were also available for the G-series but those did not change the aircraft designation.) By early 1944 tactical requirements resulted in the addition of MW-50 water injection boost and high-performance superchargers, boosting engine output to 1,800–2,000 PS (1,775-1,973 HP). From early 1944 a number of G-2s, G-3s, G-4s and G-6s were converted to two seat trainers, known as the G-12. An instructor’s cockpit was added behind the original cockpit and both were covered by an elongated, glazed canopy. The so-called Rüstsätze field modification kits and Umrüst-Bausätze factory conversion kits were part of a system promulgated by the RLM as a whole, throughout the German military aviation industry, with each airframe type number having its own set of “/R” and/or “/U” numbered designations for such upgrade packages.