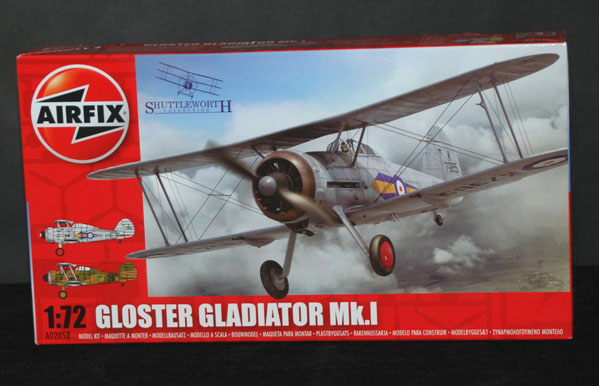 The Gloster Gladiator occupies an important place within the history of the RAF. The last of the RAF’s biplane fighters, the Gladiator had some modern features, such as an enclosed cockpit, a first for an RAF fighter, as well as an armament of four machine guns. 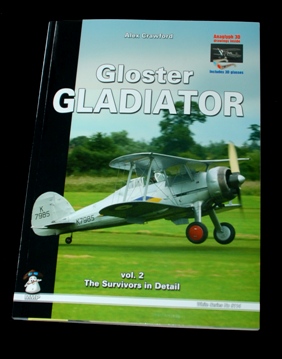 Still in service at the outbreak of the war, the Gladiator proved to be a capable biplane fighter, but was outclassed against modern monoplane opposition. The mount of some the RAF’s most famous pilots, such as Pat Pattle and Roald Dahl, preserved Gladiators can still be seen flying today at Duxford and Old Warden air displays.

First impressions are good as this kit is an all-new tool and that is good news at any time. There is a very innovative construction method in this new kit – for example the four cabane struts as a unit to help align the top wing accurately.

The tyres in this kit come with the option for a slightly weighted appearance on one side, but this is hardly visible and probably a good idea as they were kept inflated to high air pressures making any ‘bulging’ hard to pick out in some images.

The rectangular moulded shapes on the fuselage sides look slightly over scale and just need to be sanded back a little to look less obvious.

The cockpit tub has decals for the main instruments and this is ideal in this scale, with a seat that’s simple and will be enhanced by the addition of a scratched or etched seat harness. Some detail is moulded into the fuselage side and, again, this is fine for the scale; a nice touch is the option for an open access door.

I really like the subtle hollowed out exhaust pipes and the detail on the engine collector ring is very neat – separate outlet pipes being well tooled. The oil cooler grill on the right side of the engine cowl is finely tooled.

The pair of under wing MGs in their gondolas are also neat, although the barrels will need some careful cleaning up.

Usefully the front windscreen is moulded separately to the rear portion that can easily be displayed open – nice touch in this scale and this will allow you to add additional detail. In fact two separate canopies are included – one with the armour-plated windscreen fitted to some aircraft.

The two schemes provided are excellent: one a silver dope machine with Yellow/Blue fuselage and upper wing markings for Edgar James ‘Kobber’ Kain of 73 Squadron, 1937; the other a Brown/Green Irish Air Corps aircraft with Green/White/Orange markings – superb! Those provided here look good quality like others we are getting now from the manufacturer – just ensure that they go onto a gloss surface and then spray (or paint) gloss varnish over the decals once dry before applying your chosen varnish/finish. I say this because I have been caught out with the slightly matt texture of the decals looking far too obvious if you apply the varnish directly onto them; just something to bear in mind! The decals are in register and colour saturation is good too.

Geoff C.
Here’s a shot of my completed Roden 1:48 scale model in the same No.73 Sqn markings.