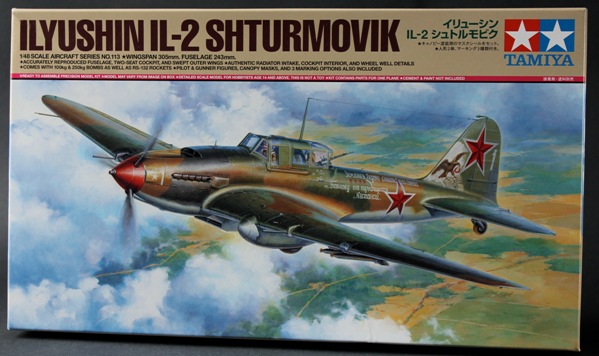 Some great weathering and detail reference contained in this video…

I had not realised that the Soviet Union produced so many of these aircraft c. 42,000 in all! It strikes me that this type was probably larger than the whole RAF during the war (but don’t quote me on that !). It was hardly a handsome aircraft but if you judge the purpose from the looks, tank busting is the natural habitat of this ‘tank’.

Robust is the word for this machine and dive bombing was its preferred method of bomb delivery. Later on it was more often than not equipped with various calibres of cannon; some of which were so powerful that it is a wonder they did not stop the aircraft in mid air.

This is a review of the Tamiya kit and in the box is included a potted history.

After you have whetted your appetite on the rather attractive box art, opening it you will find:

The first sprue (I pulled out) contains the wings. They have great detail on them including many access panels . These are shown in close up in the attached images.

The panel lines are just about the right depth and in any case will smooth down a bit with paint. The next in hand is the sprue containing the fuselage. Once again the fuselage itself is finely engraved. As you can see the sprue includes the rear wheel halves. Normally I don’t really like wheels treated like this but the detail is so good I think Tamiya can be excused not supplying a whole wheel!

There is a minutely detailed machine gun on one of the sprues with the mounting and ammo supply. The engine is not on display in the finished kit so is supplied as a block just to attach the prop to.

One sprue has the parts for the main undercarriage and cockpit and the large part for the underside of the air frame. The cockpit pieces are more than adequate for an out of the box build but they would have to be replaced with aftermarket to get any further detail into the office.

There are two sprues that hold the tailplanes, bombs rockets and exhausts. The bombs will look good painted up and weathered and the bomb releases are very delicately detailed. The exhausts will need hollowing out but this is no big deal. A sprue above also contains pilot and gunner figures (its twin does not!) The gunner’s arms and legs are positionable.

The glass looks superb. Very clear and offering open or closed versions (different parts supplied for each) clearly illustrated in the instructions.

Thank goodness they supply masks for the canopy! These have to be cut out but even that cuts out two thirds of the work to paint these; they would be fiddly in the extreme. Lots of big red stars are included and plenty of Cyrillic if that is to your taste! You will have to make up your own seatbelts as these look the weakest part of the kit or I suppose they could be transferred to Tamiya tape? Not so good.

Here are all the pages of instructions – as you can see they are the usual clear and easy to follow Tamiya version and will give you a taste of how it all goes together.

All in all a very good kit and should give aviation and armour modellers a lot of interesting weathering. Not many of these operated from nice tidy airfields with made up runways! I am afraid I am in no position to judge the accuracy of the kit but I have seen a couple of builds and they capture the look of the hunchback.