With thanks to the editor of SMN I have been given the opportunity to review Revell’s recently released Bell P-39D Airacobra in 1:32 scale. In this Here Now review we have a brief summary of what’s on offer in this kit before it’s subjected to a full blown build article which will follow shortly in SMN.

Before we get into the pros and cons of the kit itself let’s discover some intriguing facts about the Bell Aircraft Corporation and later Bell Helicopters.

At present the US Department of Defence are operating the revolutional Bell/Boeing V-22/MV-22 Osprey under the branches of the USAF & USMC. This aircraft is VTOL and STOL capable with the use of its tilt rotors, and this allows the machine to operate much like the BAe Harrier type aircraft. It was conceived originally to operate like a helicopter with good endurance and the speed and performance of a turbo prop aircraft.

But I think Bell lead the way with rotor aircraft technology in the 1960’s with their UH-1 Iroquois, more commonly known throughout the world as the Huey. This helicopter changed the way the US Forces could apply the GI’s to a DZ with almost pinpoint accuracy and heralded the historic cries of “Get to the chopper!!!”

Two decades previously the Bell Aircraft Corporation helped Captain Charles “Chuck” Yeager to break the sound barrier on October 14 1947 in the Bell X-1-1 46-062 “Glamorous Glennis”. Glennis being Yeager’s wife; saw him use the GG name before when he flew P-51D Mustangs with the 357th FG 8th AF Leiston England 1944-45. By coincidence Flight Officer Yeager flew P-39 Airacobra’s stateside with the 357th before being shipped to Europe.

The P-39 was designed 9 years before that rocket speed machine catapulted Yeager in the history books at the Bell’s Buffalo factory in New York. The 39 is a single seat semi-monocoque aircraft but it does differ from other Pursuits of the same vintage in that the Allison 1710 V12 engine is positioned behind the pilot and a 37mm cannon up front with the blast tube running through the Curtiss Electric prop hub. Along with the 37mm the sharp end also included x2 .50 cals in the nose and x4 .30 cals in the wings, giving the aircraft a heavy firepower. Though the machine was intended as a Pursuit fighter for the USAAF it did have difficulty keeping its own at altitude and in the end the 5th AF groups in the pacific mainly used it for ground attack duties. The Soviets used various models of the 39 to good use on the Eastern front in the air to air and air to ground roles. When production lines ceased over 9500 examples had been manufactured.

History over……..what’s in the kit?

As with all kits manufactures, Revell have some good artists at their disposal to “sell” the products and this one is no different with the box cover depicting a flight of 39’s letting go the drops and entering combat over the “canal”. Opening the contents and I find that this is a re-boxing of the Special Hobby P-39D sprue for sprue but without the resin fishtail exhausts and resin gunsight, the decals are different also. 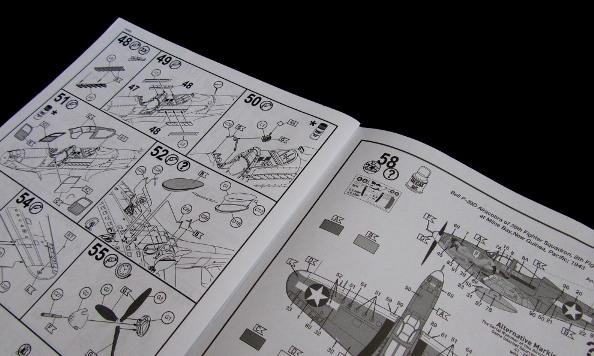 The instruction layout is standard Revell with all the usual warning for the modeller safety at hand like “don’t pour cyano into your grandfather’s dentures” etc. Reading the booklet several times I could not find anything that would throw anyone off course during construction, this being very helpful during component and assembly’s construction. 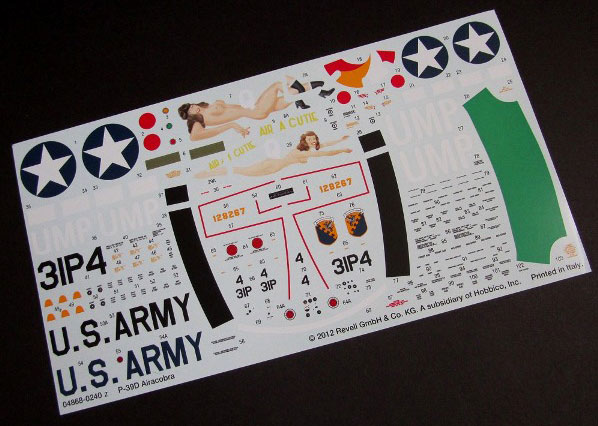 The decal sheet provided offers 2 different versions for finishing, both being from the 8th FG New Guinea 1943, though I am sure I know which scheme every warm blooded model basher out there will choose. The printing is sharp and defined, as are the colours. A full stencil pack is provided along with the star and bars and the 1st time I have seen it, yellow prop tips!!

The light grey sprues are sealed in a single bag, 7 in total, this including a clear sprue for the canopy and lamps, 160 individual parts in total. The review kit has a fair amount of flash on the sprues but that can easily be dealt with. The fuselage has raised and engraved panel lines with the wings just being engraved, all very subtle and not too deep. The detail in trying to re-create the fabric stitching for the aileron/rudder/elevator tail feathers have been incorporated into the moulds. The engine area only has the exhausts to offer. No motor will be shown with a straight box build. 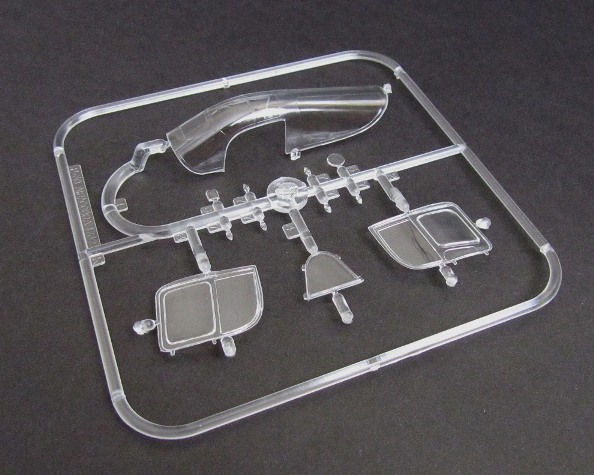 The cockpit has some detail but this I will tackle in full during the build review. As I said no resin or etch included but I’m sure you can raid your spares stash for a set of seat belts.

For the price of around £27 (in the UK from a number of suppliers) you know you are not entering the play pit of a Tamiya 32nd scale kit but that aside I believe that overall the kit will provide you with a realistic scale representation of a Bell P-39 Airacobra and as the Special Hobby boxes have been on the shelves for a few years now I’m confident you can enhance your piece with numerous aftermarket products.