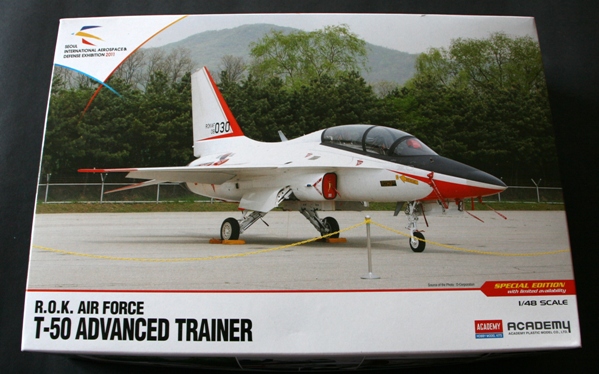 The T-50 Golden Eagle supersonic advanced trainer is South Korea’s first indigenous supersonic aircraft and one of the world’s few supersonic trainers, making its maiden flight in 2002 and entering active service with the Republic of Korea Air Force in 2005.

Its shape is very similar to the F-16/F-2 in plan form, though its outline is unique from the side view; the beak-like nose shape makes its name quite apt.

With a clear nod to the home market, this new release from Academy is a welcome addition to the military aviation modelling arena and, given the export to Indonesia, pursuit of orders in Iraq, Israel, Poland and Spain, and a partnership with Lockheed Martin in a bid to become the next generation advanced trainer for the United States forces, it could become an important type.

The box art is a photo of a parked jet, with a label for the Seoul International Aerospace & Defense Exhibition 2011. The side panels contain a number of useful walkaround photos. It also states that this is ‘Special Edition with limited availability’.

All sprues are in individually bagged so everything is well protected in what is a packed box. There is only one marking scheme option, but this allows for any T-50 trainer to be built, from the first in the 2005 production block, through the 2006-2010 years.

There over 200 parts to this model, with 5 sprues of white plastic parts plus the lower rear fuselage and upper fuselage/wings on separate trees.

The upper fuselage and upper wings are one piece and, whilst the back end is split horizontally, the nose is split vertically.

There is one sprue of clear parts, with a large crystal clear canopy, which has raised frame lines that will ease painting, though there is a seam line that will need sanding out.

The canopy sprue is moulded to provide maximum protection for the canopies, which is really good to see.

The instrument panels are full clear pieces and, with careful painting and the supplied decals, should come up really nice.

Panel lines and rivets are well done; there is a centreline drop tank and 4 ‘smoke wainder’ (sic) as the stores options.

Additionally, flaps are separate which presents an option to ‘animate’ the model, although there are no guides as to the angle of placement.

Some parts are not used; from these, I would guess that we can expect both Black Eagle aerobatic team and combat versions later. Overall, the quality of moulding and tightness/delicacy of parts is amongst the best I’ve seen.

To prove my point, I wanted you to be able to see this kit in its full glory! Click on the Thumbnails below to enlarge the images and see what you think.

The instructions are clear, on an 8-page fold out grayscale sheet, with a separate sheet for the parts trees layout.

The modelling sequence appears logical, starting as usual with the cockpit. Colours are called throughout the build process, with Gunze, Life Color, Humbrol and Testors/Model Master all referenced.

I can see that there could be seams to join up, with the intake trunks and exhaust both being in 2 halves.  There are also photos to aid placement/painting of the undercarriage doors/legs.

However, it is just as well that the airframe colour is overall white, as the main marking placement diagram does not give an indication of colours on the airframe.

There is virtually no carrier film on the decals, which look clearly printed and have rich colours.

The overall scheme is white, but decals are provided for all of the orange trim, the black non-reflective areas around the canopy and on the nose and even a subtly different shade of orange/red for the under nose area, which matches the box photo.

The orange trim has cut outs to fit around various holes/gaps on the underside, so will need to be a perfect fit if awkward colour matching and touch up painting is to be avoided. Although clearly, one could forgo the decals and paint these areas.

There are masses of stencils, some very fine, so a few hours work on decaling alone, I think!

This is something different and one can’t help comparing Academy’s approach to home produced products to that of Italeri (they have also, using the Italeri moulds ironically, produced a Hawk Mk 67), as we wait for a mainstream kit of the similarly sized AMX.

Academy have clearly put a lot of effort into this product and it shows. I’m really looking forward to seeing how it builds up and would not hesitate in recommending it. Right size, should be a reasonable price and an awesome level of detail.

Expect it to be available from your Academy stockist; if not in this version, in the others that are sure to follow.