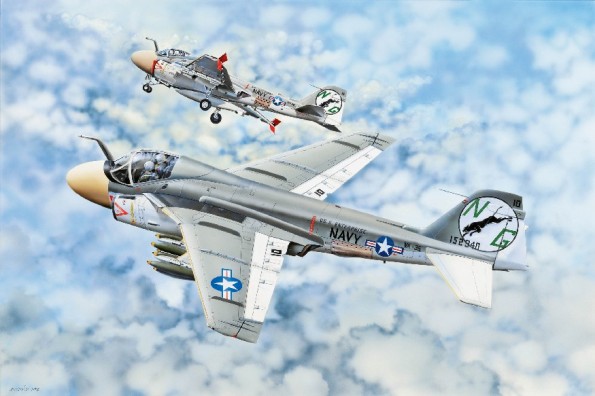 Well I like so many others always felt this kit was simply never going to happen. It’s been in the ‘coming soon’ bracket for 5-plus years and maybe more and I reckon most had given up on it. As soon as I saw it appear though I had to get it and it was coincidently released around my birthday so I didn’t even have to spend my own money on it!

I think many, even though it is here now will be slightly disappointed it is the A and not the E, which has a larger range of options and weapons fit. For me though I am delighted it is the A, as it was this model that played much of its operational career in Vietnam and featured alongside a B in the film Flight of the Intruder. The film was pretty poor but the music good and the flying pretty good too. Special effects really ought not to be mentioned but if you haven’t seen it you will want to build an A6.

It’s a unique shape and indeed it is a variant of this aircraft that I flew in in 1982 with a detachment from VMAQ 2 (The Black Bunnies) who were then flying the Grumman Prowler; the 4 seat ECM variant of the A6. The A6 is a huge aircraft and very 1950’s type technology which makes for an outstanding modelling subject.

The reference books are many but seem in most cases to be out of print. I suspect that the printers are tooling up as I write. There is a lot on the internet and all I have found so far enables any super-detailer to have a field day! My plan on this occasion is to build it from the box with no exceptions. Keep an eye on Build Now for my build and when it’s completed, Finished Now. 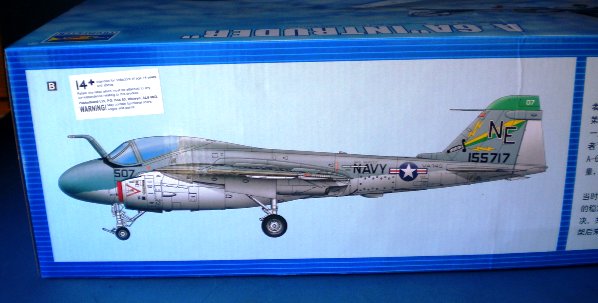 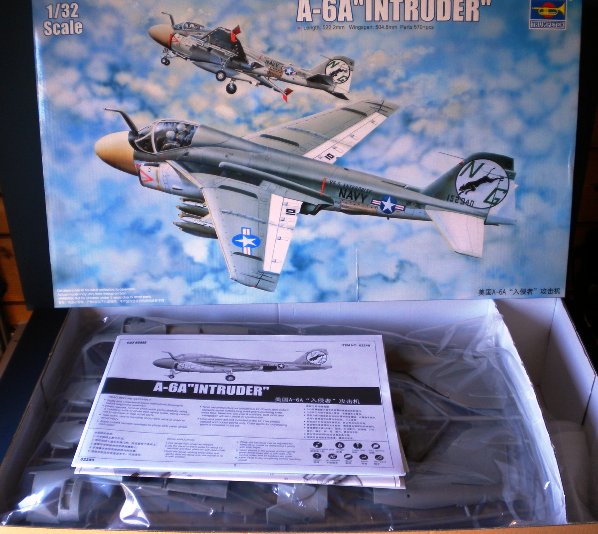 To use the current text vernacular: OMG! One could live in the box which is truly enormous and it is packed with sprues about which more anon. The box art is, as usual, not that inspiring but workmanlike and also includes a drawing on the side panel of the other decal option in the box. Everything is so very typically Trumpeter with the pale grey plastic beautifully moulded and screaming out to be built. There are a couple of fantastic exceptions to the typical Trumpeter approach though which on this kit I am truly delighted with. Read on to see what I mean.

My first impression with just a cursory look in the box is that this without doubt is the best Trumpeter kit to date. I will try and justify that during this review but right off the bat if you love USN aircraft and the A-6 in particular then this kit is a must have – from what’s on offer in the box, we’ll see about the build later.

I don’t intend to do a sprue by sprue review here but will pick out the areas that make tis kit exceptional but also where it might be even better. At the end you will have to personally justify if the end justify the means but I have to say I am so glad it was my birthday.

So what’s all the fuss about and was it worth the wait, you know my answer so here goes, see what you think.

Typically booklet style which will be very familiar with anyone that has built a dragon kit. Booklet style construction sequences with Gunze paint colours noted where appropriate plus an indication of its colour too. Not perfect but better than some. The build is logical and in this case starts with the engines, an area I really enjoy. Take your time with the instructions as placement can at times be a little vague but generally speaking better than most and quite intuitive too. (Someone at Trumpeter pop over to Dragon and give them a lesson please).