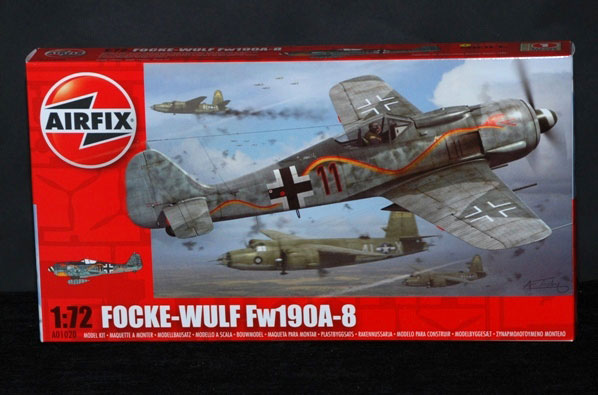 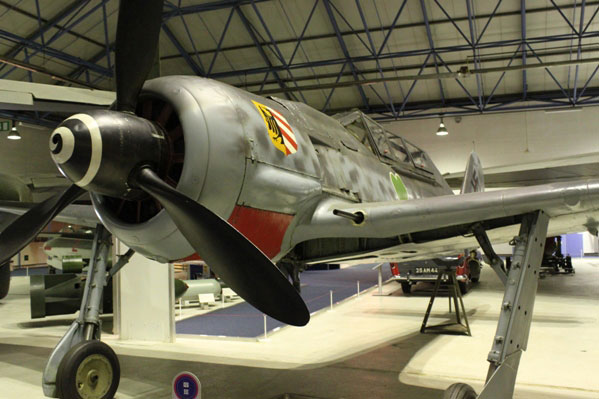 The Focke-Wulf Fw 190 was one of the most famous fighters of WWII; perhaps not as important as the Spitfire, Zero, Mustang or Bf 109 but its performances were equivalent. Late versions of type like the ‘D’ (“Dora” or Ta 152 were considered by many to be the best aeroplanes ever built at that time. The Fw 190 was a truly multi-role aircraft within the German Luftwaffe: fighter, night fighter, bomber, fighter-bomber, torpedo bomber …the list goes on! The basic design had excellent potential for development, much like the Supermarine Spitfire that enabled it to carry out so many and varied tasks so effectively.

The A-8 was an improved version of the A-7 with 115-litre extra tank behind the cockpit (note the correctly moulded fuel filler caps either side of the rear centre section on the Airfix kit). In addition, the aircraft’s electronics were upgraded to the FuG16YZ radio, FuG25a IFF and Molane antenna. The pitot tube was moved to the starboard wingtip (also correct in the kit). To adjust the position of centre of gravity, the radio equipment bay in the fuselage was moved one section forward and the position of the ETC501 bomb racks was moved 20cm forward (the ETC501 centreline rack is included with the kit). Many aircraft built after September 1944 were fitted with the “Galland Haube” canopy (slightly blown and rounded for better visibility) and this too is offered in the Airfix kit, along with the earlier, standard canopy.

First impressions are good as this kit is an all-new tool and that is good news at any time. The basic shape looks pretty accurate for a Fw A-8 and some observations have already been made above – all positive so far.

The tyres in this kit come with the option for a slightly weighted appearance and tyre tread pattern looks decent too. The undercarriage units are delicate and well moulded; at first glance I thought that the oleo scissor links were moulded in the ‘in-flight’ uncompressed mode but not so, looking at several photographs of Fw 190s parked on the ground. You can remove the lower portions of the main gear doors if you wish to simulate how some Fw 190s looked when operating on the Eastern Front and muddier airstrips.

Detail moulding like the placement of the cowl hinges is correct for an ‘A-8) as well as a fin tip-mounted pointed aerial mast.

The cockpit tub has decals for the main instruments and this is ideal in this scale, with a seat that’s simple and will be enhanced by the addition of a scratched or etched seat harness. Some detail is moulded into the fuselage side and, again, this is fine for the scale; a nice touch is the raised detail on the side consoles. The Fw 190 cockpit is pretty simple in layout and in this scale will look fine with a little care in painting and finishing.

The pair of upper cowl mounted MG 17s are nicely moulded and although attached to the upper cowl will look fine when painted if they haven’t been broken off! The ETC501 centreline rack is well detailed and you can choose whether or not to attach the 300 Litre fuel tank supplied – also nicely tooled.
The all-metal variable-pitch 9-12176A propeller looks good in shape and just needs to have the excess mould seam removed and the fan blade unit in front of the BMW801D-2 engine will look fine when painted up and sensibly just the front faces of the cylinders are visible if you look hard.

Usefully the finely tooled front windscreen is moulded separately to the rear portion that can easily be displayed open – nice touch in this scale and this will allow you to add additional detail. Two separate canopies are included as already mentioned.

These follow the usual exploded stage diagrams and are clear and straightforward. Humbrol paint references are given on the all-colour painting guide on the rear of your box. Colour names are also given allowing you to match your RLM colours from whatever source you prefer. 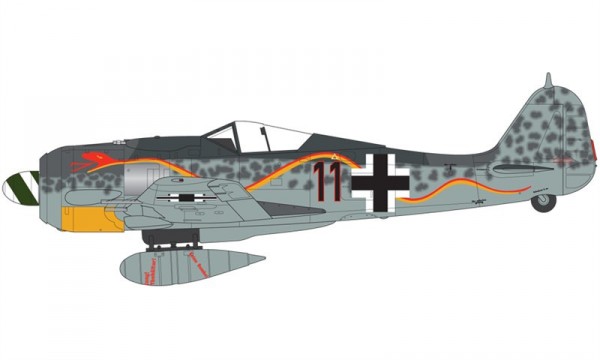 Only one scheme is included and this is the area that I’m not quite sure of, although many of you will I’m sure know better but here are a couple of observations and then you can decide for yourself which way to go. Before I get into that, the quality looks very good and a very nice feature is full stencil data markings – excellent.

Here is the colour box artwork for the aircraft included and it refers to the markings correctly for Jagdgruppe 10 that has the impressive red/yellow snake markings down each side of the fuselage. This represents an aircraft from that unit while based at Parchim (not Pachim , I believe as on the box), Autumn 1944. The specific aircraft illustrated on the box is ‘Black 11’ outlined in red. 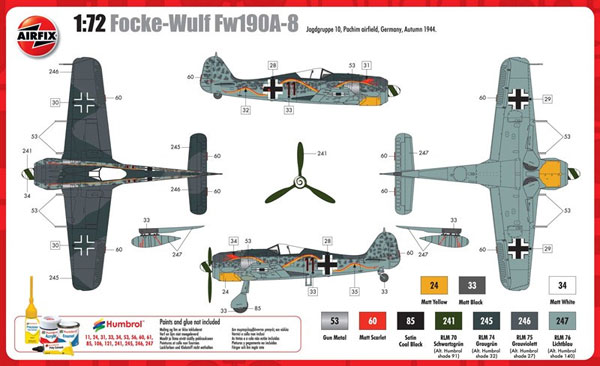 I have been taking a good look at this and looked at many references and, as I say, it could be that I just haven’t found the photo/reference that’s been used for the Airfix sheet but this is my info (from the Soler and Gimeno reference above).

“Focke-Wulf Fw 190A-7/R6 ‘Red 8’, flown by Feldwebel R. Hartkopf, of JGr 10, from Parchim aerodrome, Germany in the Summer of 1944. This Fw 190 and others were employed for making some W.Gr21 rocket-thrower tests. This armament was also installed in the A-4, A-6 and A-8 variants and was assembled under the wings (on both sides) in order to increase the destroying capacity with 21cm missiles. This aircraft is painted the standard RLM 74, 75 and 76 colours with a solid mottled scheme made up from RLM 74 shade-painted onto RLM 75 in the tail area. The inner park of the national insignia appearing in the fuselage was painted in RLM 74 for continuing the colour of the upper camouflage. The Swastika was smaller than the standard one. The spinner is black with a white spiral. The most evident detail is the snake painted all along, on both sides of the fuselage.”

This is certainly a very welcome addition to the ever-growing range of new-tool kits from Airfix that replace (usually) much older models that need to be withdrawn. The kit is exactly like we have more recently become used to from this manufacturer – great low price with a good quality model inside that is suitable for all modellers.

As far as those decals go, I could easily be off point and would welcome sight of a photo showing the aircraft featured as is not only for my own interest, but we may be able to add to this review if I get it for sure. You can always add aftermarket decals that will be inexpensive and you have many sheets to choose between from all the usual aftermarket decal manufacturers and suppliers.