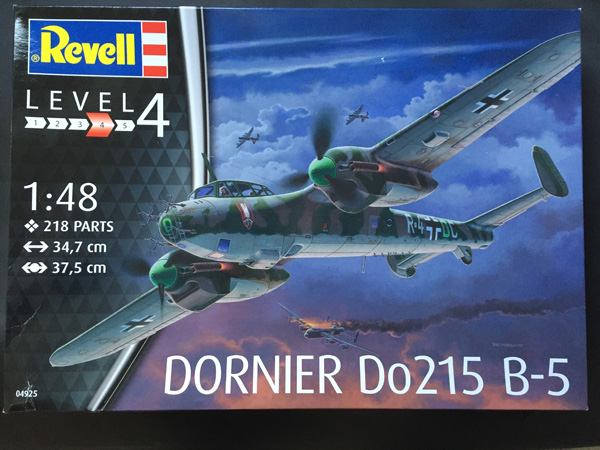 The Dornier Do 215 was a light bomber, aerial reconnaissance aircraft and later a night fighter, produced by Dornier originally for export, but in the event all except two served in the Luftwaffe. Like its predecessor, the Dornier Do 17, it inherited the title “The Flying Pen-cil” because of its slim fuselage. The successor of the Do 215 was the Do 217.

The Do 17 fast bomber elicited renewed interest from foreign air forces (after the initial Do 17K series production). In July 1937, Dornier therefore prepared a pre-series Do 17 Z-0 as a demonstrator for export customers. It was given the civil registration D-AAIV. While this air-craft was essentially identical to the production Do 17Z, the Reichsluftfahrtministerium as-signed the designation Do 215 to the export version. The V1 prototype retained the 9-cylinder Bramo 323 Fafnir radial engine of the Do 17Z.

Night fighter version called Kauz III. 20 aircraft converted from B-1 and B-4 versions with Do 17 Z-10 “Kauz II” nose equipped with IR searchlight for the Spanner infrared detection sys-tem. Do 215 B-5s were armed with four 7.92 mm (.312 in) MG 17 machine guns grouped above the IR light and two 20 mm MG FF cannons in the lower nose. The Spanner system proved to be useless and the Lichtenstein 202 B/C radar was installed on some aircraft start-ing from the middle of 1942.

This kit is in fact the ICM kit, re-boxed with new decals. Interestingly, the original kit was on-ly released as recently as 2014 and from a quality manufacturer, so what you get is a very up-to-date kit in every sense of the word.

The Revell box artwork is usually impressive enough and that’s the case here – an image of a Dornier Do 215 B-5 Nachtjager creating havoc amongst an Allied bomber stream.

Well moulded light grey sprues supplied and taking the main components first, they are well tooled, smooth finish typical of the type with fine recessed detail and good levels of other detail across the board. No distortion on the main parts is apparent and a dry fit of the fuse-lage sections suggests a decent fit; the initial impression is one of detail parts that will go to make up a nice representative model in 1:48 scale. No real evidence of excess flash on the parts supplied in this kit.

Several instrument consoles and panels are included, some with raised detail and some de-signed to take the small decal dials supplied on the decal sheet. What there is as you will see from the photos is authentic and nicely done. 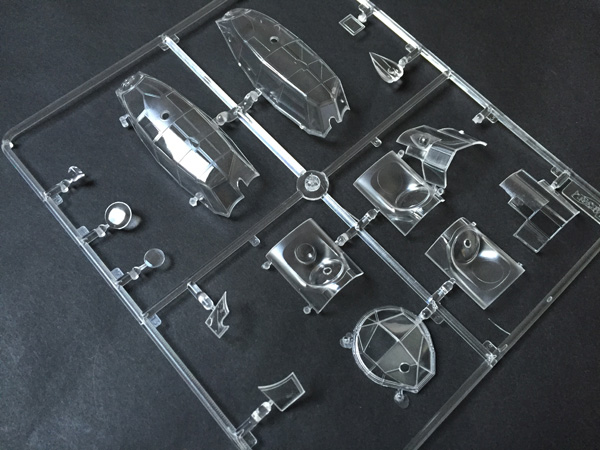 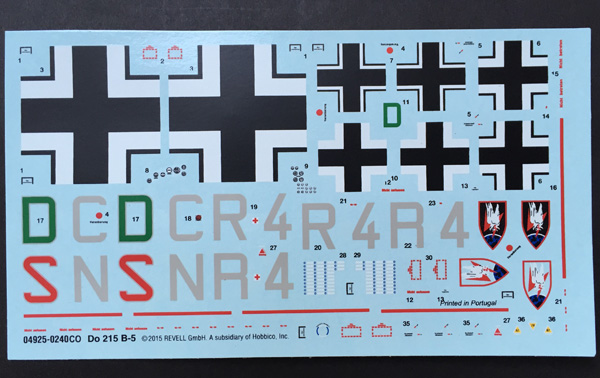 This is a great subject and it’s good to have another Luftwaffe WWII aircraft readily available in 1:48 scale. This model will provide all military fans, especially those with an interest in WWII aircraft and German aircraft subjects with a great new addition to their collection.
The model itself looks to be well engineered from the dry/test-fit. Moulding is good and the detail ok in my opinion.
Geoff C.