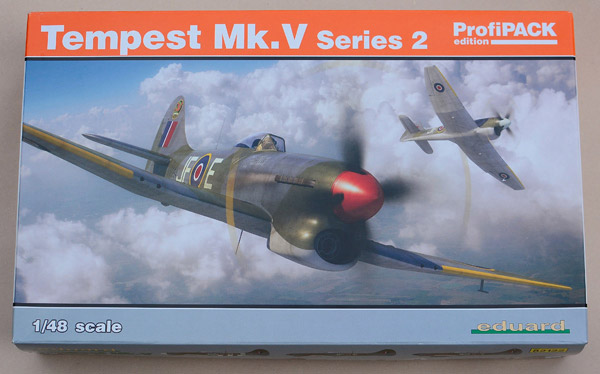 “Reaching Newchurch airfield at 480 mph I held “RB” down to 20 ft from the runway and then pulled her up to a 60 ° climb holding it as the speed dropped slowly off and the altimeter needle spun round the dial as if it were mad. At 7000 ft the speed was dropping below 180 mph and I rolled the Tempest lazily inverted, then allowed the nose to drop until the horizon, at first above my head, disappeared below (or rather above) the now inverted nose, the fields and woods steadied into the centre of the windscreen and then whirled around as I put the stick hard over and rolled around the vertical dive. Steadying again I pulled out over the tree tops at 500 mph, throttled back and pulled hard over towards the airfield in an over-the-vertical climbing turn, lowering the wheels and flaps in a roll as the speed dropped. What a magnificent aeroplane! They could have all their Spitfires and Mustangs!”
(“My part of the sky”, Roland Beamont)

In March of 1940, Hawker initiated a number of design studies aimed at improving the Typhoon. Among these studies were ways of improving the Typhoon’s high altitude performance. These involved the use of a new wing design that featured a thinner wing section and a reduced wing area. The new wing had an elliptical planform similar to the Spitfire and showed a great potential for increasing performance at altitude while reducing the tendency of the original Typhoon wing to buffet at speeds around 500 mph. The maximum depth of the new wing occurred farther back, at 37,5 % chord, while the thickness/chord ratio reduced to 14,5 % at the root tapering to 10 % at the tip. This meant that the new wing was five inches thinner at the root than the original Typhoon wing.

The thin wing meant that alternative space for fuel had to be found and this was achieved by moving the engine 21 inches forward and inserting a 76 gallon tank between the firewall and the oil tank. The redesign also included a new undercarriage and the latest of the Sabre engine, the Mark IV.
In order to save development time, Sidney Camm decided to mate the new wing to a modified Typhoon airframe which retained the Sabre power plant. The RAF ordered two prototypes under Specification F.10/41 18 November of 1941 and the project quickly became known as the Typhoon II.

Hawker´s biggest problem with the new fighter was the engine. As with the Typhoon, and as a precaution, it was felt that the prototype should allow for the use of alternative engine installations. By the spring of 1942, the various problem with the Sabre had not been fully eliminated and the company proceeded with its plans for alternative engine installations for the Typhoon II prototypes (The project was renamed the Tempest during August). By this time the RAF had also revised the original prototype contract, now calling for a total of six aircraft.
Different mark numbers were allocated to each of the six prototype/engine combinations: the Mk I (HM599) was powered by a Sabre IV, the Mk II (LA602 and LA607) were powered by Centaurus IV radial engines, the MK III (LA610) used a Griffon IIB, the Mk IV (LA614) had a Griffon 61 and the Mk V (HM595) had a Sabre II.

Three marks reached production, the Napier Sabre powered V and VI, the former seeing extensive use in Series 1 form during WW2 in UK “Diver” V1 interception role in 1944, action in D-Day and the liberation of Europe 2 TAF. The Series 1 aircraft were gradually replaced post-war in Series 2 form and saw most of their service with my Father’s 135 Wing based at Fassberg and its satellite Dedelstorf in the Luneberg Heath, also 122 and 123 Wings at Wunstorf near Hannover in North Germany by the British Air Force of Occupation (BAFO).

The VI saw service predominantly in the Middle East in Egypt. The final and probably the best iteration of the Tempest was the Centaurus powered II used by the RAF (BAFO) in occupied Germany from 1946- 1948 and also by the RAF in India. This was last into service and replaced the Tempest Vs in Germany. By 1950 most were obsolete (some soldiered on as Target Tugs (TT5) as the Jet Age was in full swing with the RAF. Most were scrapped with a few being sent to Air forces in the new independent states of India and Pakistan.

Clearly Hawkers still had plans for a great design and the Tempest II evolved into the Fury and infamous Sea Fury for the Fleet Air Arms of the UK and other commonwealth nations.

Of the 1400 Tempest Vs produced, there are none currently airworthy; the survivors are mostly ex Indian Airforce Tempest II re-patriated by Doug Arnold in the 70’s and 80’s. Today, there are 9 Tempest II, 2 Tempest V in the UK, India and USA and 1 TT5 at RAF Museum Hendon left in the World.

So being the son of an ex-Tempest pilot, (have a look at the Angus Mackay section in the Pilots section of the above website)…

…you could say that love of the aircraft is in my genetic makeup and I have amassed a wealth of reference information, original photographs and built several of the original Eduard 1:48th kits in Mark V and a Mark II using the MDC resin conversion.

Whilst making another Tempest II from a 10 year old eduard kit I had in the stash, I was looking for some more aftermarket goodies for the II and saw that the Series 2 version of the New Tool Tempest V had been released by Eduard. My initial thinking was that I would use the MDC resin parts on this new released model. well that was until the new model arrived a few days ago!

The level of detail of the new compared to the old is like comparing a Tamiya model to a 1960s Airfix kit!

The parts count has increased from 62 (old) to six sprues of clear and dark grey with a total of 178 parts(!).

Don’t forget the Cartograf printed Decal sheet with five colour schemes for four aircraft including one all-silver. I was heartened to find one of the schemes was for an aircraft that my father had flown during his time with 274 squadron at Dedelstorf.

The instructions run to twenty pages of A4 Art Paper and include wartime schemes for 3 and 486 (RNZAF) squadrons, two iterations of Pierre Clostermann’s “Le Grand Charles”, the silver 123 Wing CO aircraft Zipp XII and finally an 80 squadron aircraft that my father had flown in late 1945 with 174 Squadron. Add the Profipack wheel hub, walkway and canopy masking set with the Photoetch fret of cockpit details, belts and airframe small parts and it is hard to see why you would need any aftermarket parts to produce an impressive model!?!

To say I was absolutely stunned by the new release is an understatement, this being the first of the new generation Eduard models that I have handled.

Ignoring the sublime surface detail and accuracy of the main components (see photos) for a moment, we now have separate flying control surfaces, two choices of wheel, moulded with separate tyres and hubs to a level of detail normally reserved for resin aftermarket items. Eduard have cleverly moulded the drop tanks in clear plastic allowing the clear see through fairing between the tank and wing to be reproduced perfectly.

One can choose between rocket armament or tanks (was surprised there were no bomb racks for 500 pounders included). My father’s logbook shows that he spent a lot of his operational time “rocketeering” (honestly, that was the log book term back then) and strafing ground targets. The injection moulded cockpit components and internal framework match the quality of items that I have only seen before as resin components and almost seem a shame to lock away inside the fuselage for no-one to see! 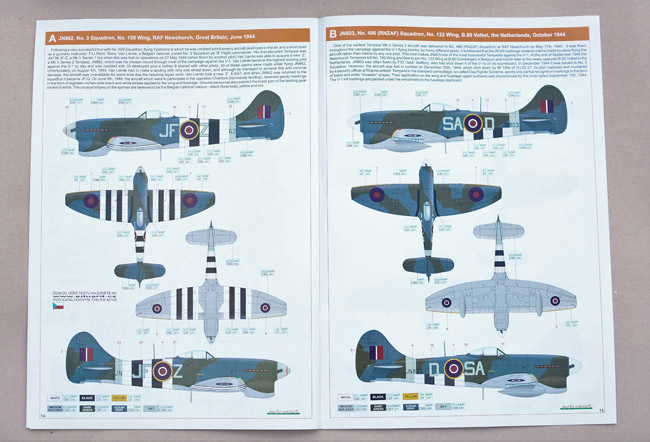 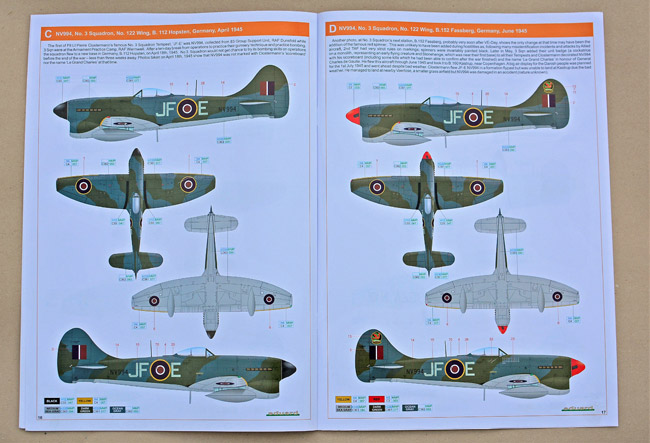 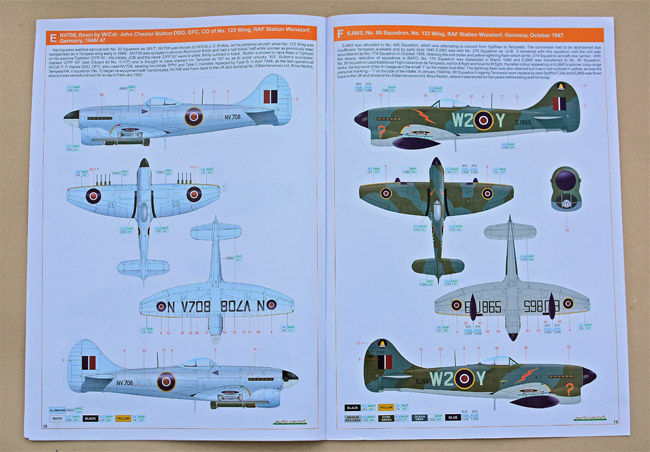 Initial inspection, shows no major issues regarding the assembly, one obvious improvement compared to the old tool is the separate main canopy frame which will avoid the need for masking of this “centre piece” component, the detail of the underside in particular the wheel wells and doors is most impressive with subtle rivet detail and internal panel detail on all the doors and bays. Tripling the parts count must surely sum up the degree of excellence that eduard have achieved and I am really looking forward to making a start on this state-of-the-art Tempest V.

One last request, Eduard, please can you release a Tempest II to the same standard now??