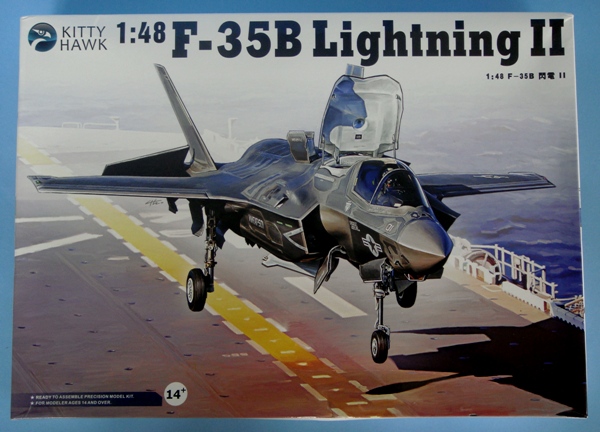 A new manufacturer is always a welcome sight in our modelling world, a recent new player in the game is Kitty Hawk Models from China. These folks are going after the big guys, diving straight into high pressure injection moulded subjects in 1:48 scale.

Meet the Kittyhawk Models 1:48 F-35B, the first to market for a production variant of the new Joint Strike Fighter (JSF).

Models of these first appeared 10 years back with a kit from Panda (now extinct), who brought out a version based on the then, X-35 concept design. A number of other manufacturers followed with 1:72 scale X-35, then a year or so back Fujimi released an F-35B, but it sadly was just a remould of the Italeri X-Plane with some glaring accuracy errors.

The Lockheed Martin F-35 Lightning II is a family of single-seat, single-engine, fifth generation multirole fighters under development to perform ground attack, reconnaissance, and air defense missions with stealth capability. The F-35 has three main models; the F-35A is a conventional takeoff and landing variant, the F-35B is a short take off and vertical-landing variant, and the F-35C is a carrier-based variant.

The F-35 is descended from the X-35, the product of the Joint Strike Fighter (JSF) program and winner of the infamous X-planes competition between Lockheed and Boeing. JSF development is being principally funded by the United States, with the United Kingdom and other partner governments providing additional funding. The United States plans to buy the bulk for its tactical airpower for the U.S. Air Force, Marine Corps and Navy over the coming decades. The United Kingdom, Italy, Netherlands, Australia, Canada, Norway, Denmark, Turkey, Israel and Japan are part of the development program and have placed varying orders.

There are three variants of the F35.

F-35A
The F-35A is the conventional takeoff and landing (CTOL) variant intended for the U.S. Air Force and other air forces. It is the smallest, lightest F-35 version and is the only variant equipped with an internal cannon, the GAU-22/A. The F-35A is expected to match the F-16 in maneuverability and instantaneous and sustained high-g performance, and outperform it in stealth, payload, range on internal fuel, avionics, operational effectiveness, supportability, and survivability. It is expected to match an F-16 that is carrying the usual external fuel tank in acceleration performance. The A variant is primarily intended to replace the USAF’s F-16 Fighting Falcon.

F-35B
The F-35B is the short takeoff and vertical landing (STOVL) variant of the aircraft. Similar in size to the A variant, the B sacrifices about a third of the other version’s fuel volume to make room for the vertical flight system. Takeoffs and landing with vertical flight systems are by far the riskiest, and in the end, a decisive factor in design. Like the AV-8B Harrier II, the B’s guns will be carried in a ventral pod. Unlike the other variants, because it can land vertically the F-35B has no landing hook. The United States Marine Corps plans to purchase F-35Bs, to replace all current inventories of the F/A-18 Hornet (A, B, C and D-models), and AV-8B Harrier II in the fighter, and attack roles.

The Royal Air Force and Royal Navy plans to use the F-35B to replace their Harrier GR9s and FA2’s, which were retired in 2010. One of the Royal Navy requirements for the F-35B design was a Ship borne Rolling and Vertical Landing (SRVL) mode to increase the maximum landing weights for carried weapons via wing lift. In October 2010, the UK announced plans to order to the CATOBAR F-35C variant instead, but in May 2012 the UK reverted back to purchasing the F-35B, citing the cost of equipping the UK’s new aircraft carriers for the F-35C. On 19 July 2012 the Defence Secretary Philip Hammond, in a speech in the USA, indicated that the UK would initially receive 48 F-35B and would announce at a later date what the final numbers will be.
The UK took delivery of the first test aircraft in July 2012 and two more will follow this year as Royal Navy and Royal Air Force pilots join the test and instructor programs.

F-35C
Compared to the F-35A, the F-35C carrier variant features larger wings with foldable wingtip sections, larger wing and tail control surfaces for improved low-speed control, stronger landing gear for the stresses of carrier arrested landings, a twin-wheel nose gear, and a stronger tail hook for use with carrier arrestor cables. The larger wing area allows for decreased landing speed while increasing both range and payload.
The United States Navy will use the F-35C carrier variant. It intends to buy F-35Cs to replace the F/A-18A, B, C, and D Hornets.

Check out some great video references…