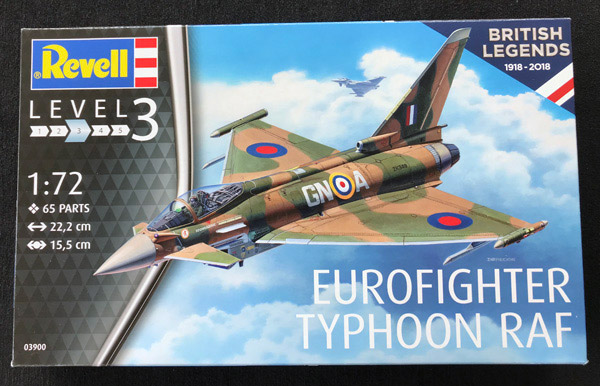 The Eurofighter Typhoon is a twin-engine, canard-delta wing, multirole fighter.The Typhoon was designed originally as an air superiority fighter and is manufactured by a consortium of Alenia Aermacchi (Leonardo since 2017), Airbus, and BAE Systems that conducts the majority of the project through a joint holding company, Eurofighter Jagdflugzeug GmbH formed in 1986. NATO Eurofighter and Tornado Management Agency manages the project and is the prime customer.

The aircraft’s development effectively began in 1983 with the Future European Fighter Aircraft programme, a multinational collaboration among the UK, Germany, France, Italy and Spain. Disagreements over design authority and operational requirements led France to leave the consortium to develop the Dassault Rafale independently. A technology demonstration aircraft, the British Aerospace EAP, first took flight on 6 August 1986; the first prototype of the finalised Eurofighter made its first flight on 27 March 1994. The aircraft’s name, Typhoon, was adopted in September 1998; the first production contracts were also signed that year.

Political issues in the partner nations significantly protracted the Typhoon’s development; the sudden end of the Cold War reduced European demand for fighter aircraft, and debate existed over the aircraft’s cost and work share. The Typhoon entered operational service in 2003; it has entered service with the air forces of Austria, Italy, Germany, the United Kingdom, Spain and Saudi Arabia. The air forces of Oman, Kuwait and Qatar are export customers, bringing the procurement total to 599 aircraft as of 2016.

The Eurofighter Typhoon is a highly agile aircraft, designed to be a supremely effective dogfighter in combat. Later production aircraft have been increasingly better equipped to undertake air-to-surface strike missions and to be compatible with an increasing number of different armaments and equipment, including Storm Shadow and the RAF’s Brimstone. The Typhoon had its combat debut during the 2011 military intervention in Libya with the UK’s Royal Air Force and the Italian Air Force, performing aerial reconnaissance and ground-strike missions. The type has also taken primary responsibility for air-defence duties for the majority of customer nations.
(source Wikipedia) 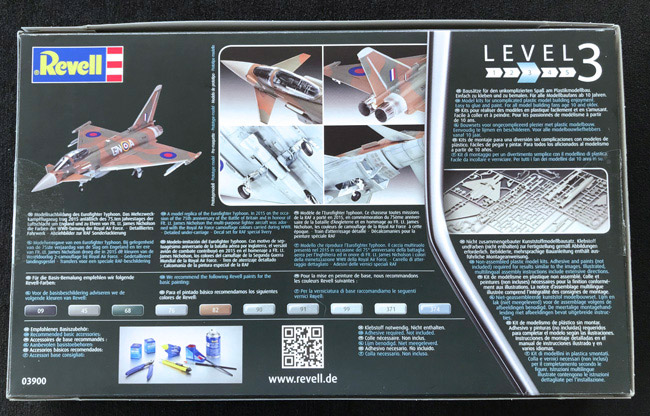 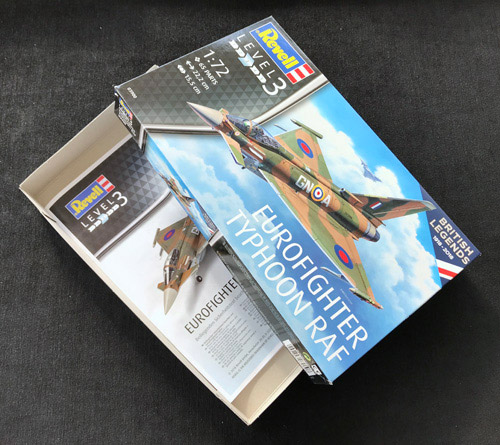 This release of the single-seater Eurofighter Typhoon is welcome and comes as part of Revell’s British Legends 1918-2018 series of releases for this year. This kit also features the excellent Dark Earth/Dark Green camo pattern and large RAF roundels and code letters on the fuselage side (check out the above photo).

New style box!
Surely not? Well, actually yes! This time we have a much sturdier tray box, rather than the much criticised end-opening boxes that this manufacturer has used for a long time now. Let’s hope that this is a sign of things to come for all their kits – high quality, sturdy boxes well presented are good for sales as well as having practical value to us modellers! Enough said! 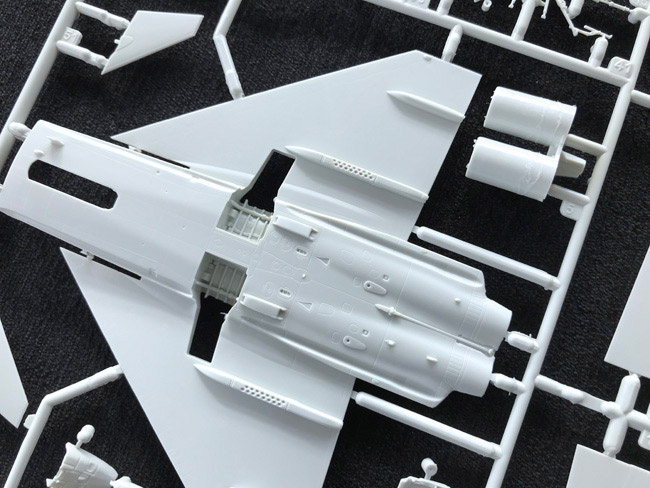 The grey sprues are packaged well and no damage is apparent. Taking the main components first, they are well tooled, recessed panel line detail has a quality feel and is refined. No distortion on the main grey parts is apparent and a dry fit of the main fuselage promises a decent fit; the initial impression is one of detail parts that will go to make up a nice representative model in 1:72 scale.

Raised detail on the cockpit panels is provided. The other internal details are well detailed too as you can see from the attached photos and will add a fair bit to the eventual look. The cockpit tub is especially well done and there is useful detail on the rear decking.
The Martin Baker ejection seat is a faithful representation of the real thing. 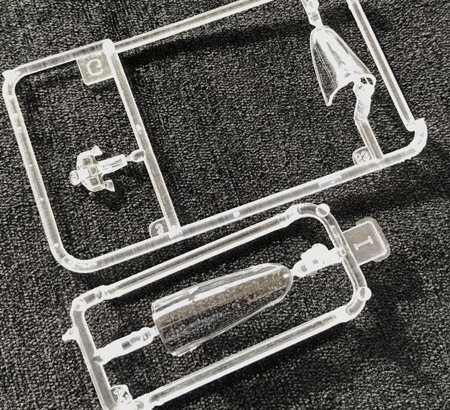 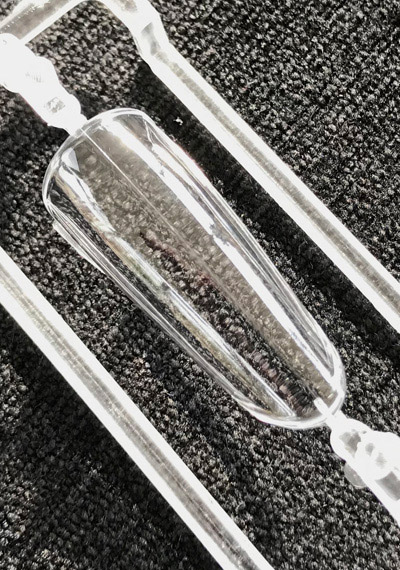 The clear parts look clear and defect-free. Looking at the completed manufacturer’s model the canopy fit looks ok but may be one to watch with perhaps a little filler needed around the edges.

The canopy has a mould seam line down the middle. No problem with this though and if you want a steer on how to quickly get rid of it, check out SMN’s Techniques Bank for exactly how to do that. 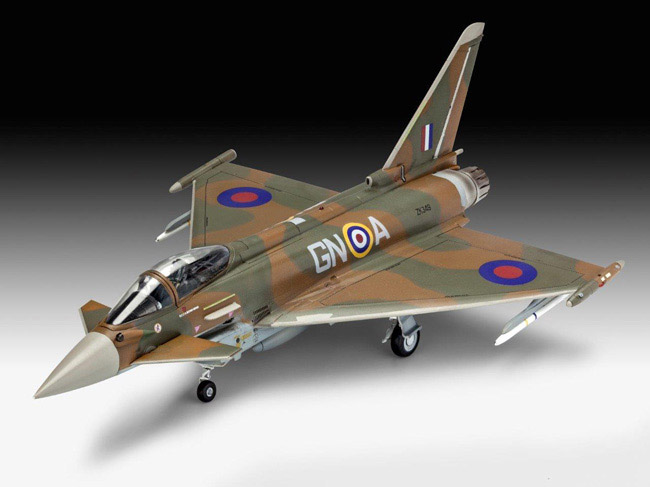 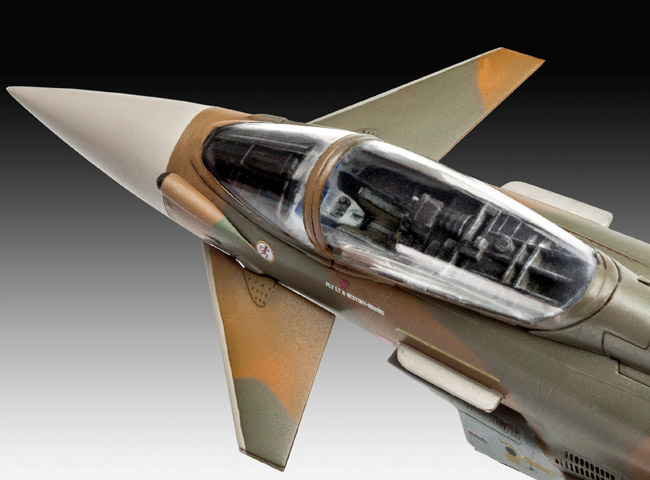 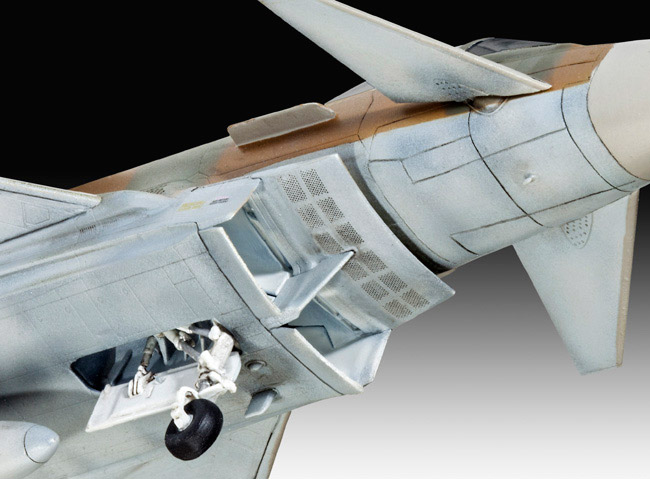 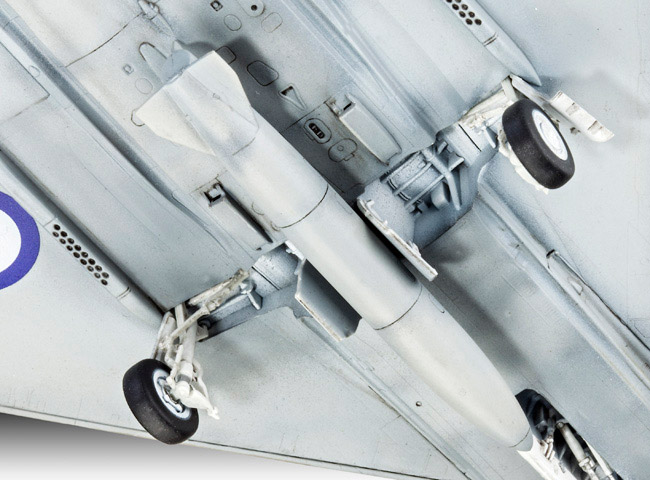 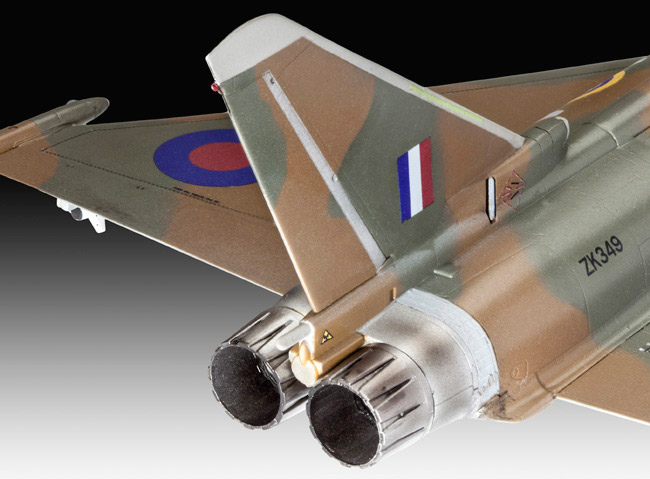 An option for only one aircraft is included:
Eurofighter Typhoon FGR-4 No.29(R) Squadron Royal Air Force Coningsby, England 2016.
Looking at the manufacturer’s completed model (above) the decals will look good when carefully applied. 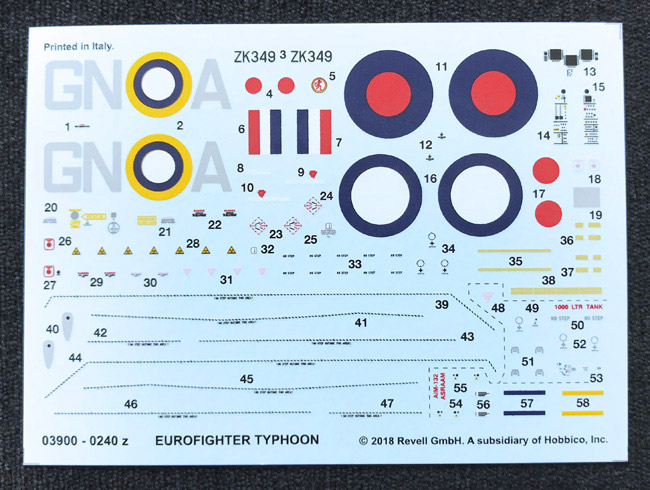 This is a great subject and it’s great that the single-seater Typhoon FGR-4 is back and readily available in this anniversary scheme. This model will provide all military fans, especially those with interest in ‘special’ schemes or if you are just looking for something ‘different’ to build, an opportunity to expand your collection.

The model itself looks to be well engineered from the dry/test-fit. Moulding is good and the recessed panel detail ok in my opinion.
Geoff C. 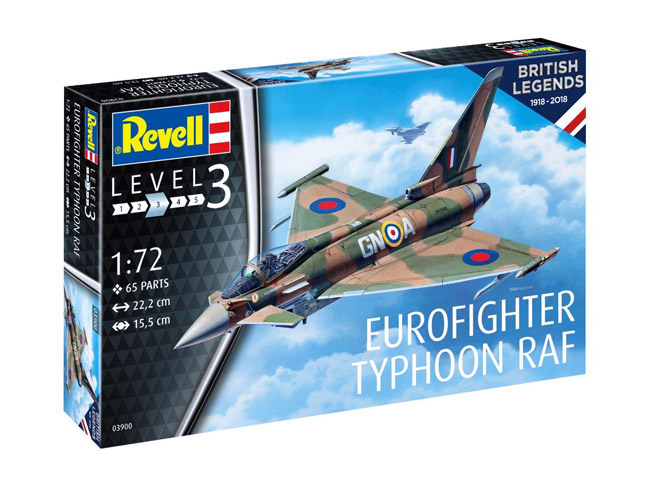