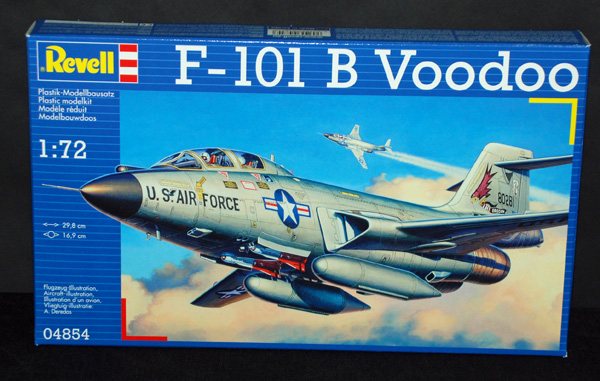 The McDonnell F-101 Voodoo was a supersonic jet fighter which served the United States Air Force (USAF) and the Royal Canadian Air Force (RCAF). Initially designed by McDonnell Aircraft as a long-range bomber escort (known as a penetration fighter) for the Strategic Air Command (SAC), the Voodoo was instead developed as a nuclear-armed fighter-bomber for the Tactical Air Command (TAC), and as a photo reconnaissance aircraft based on the same airframe. Extensively modified versions were produced as an all-weather interceptor aircraft, serving with the Air Defence Command, later renamed the Aerospace Defence Command (ADC), the Air National Guard, the Royal Canadian Air Force and the unified Canadian Forces after 1968. 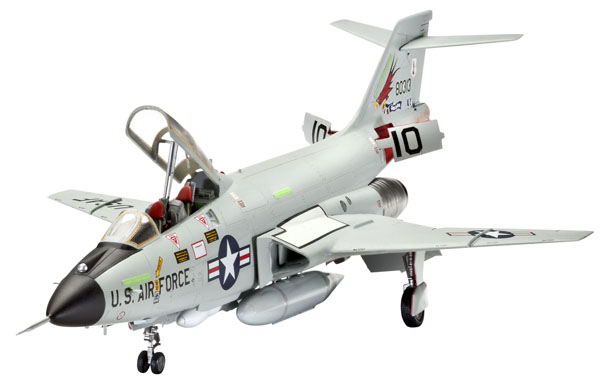 This isn’t a new-tool F-101B but that doesn’t matter, it’s good to see it back! What you get is a well-tooled model that’s current in terms of approach and breakdown. Revell has re-released a kit first released in 1991 and is moulded in grey plastic. Read on to find out more about what’s actually included…

Revell persist with rather flimsy boxes that are doubtless cheap to produce yet somehow manage to protect the contents although prove less useful during construction. Having said that, the artwork is usually impressive enough and the one on this box shows an F-101B Voodoo about to engage some bogie!

The grey sprues are packaged well and no damage is apparent. Taking the main components first, they are well tooled, recessed panel line detail and having a quality feel, if a little brittle. No distortion was apparent and a dry fit of the main fuselage sections offers a reasonable fit although some re-scribing will be almost inevitable given all the detailed panel lines around the joins. Some flash is apparent on a number of smaller parts and you can see this in the accompanying photos

The cockpit looks busy enough with reasonable seats and decals provided on the sheet for the main instrument panels.

You can see the manufacturer’s photos of their completed model above and in the Gallery Grids included with my review and I for one think this model looks every bit an F-101B.

You twin drop tanks and two types of AAMs – check out the photos in the Gallery pics here.

The wheels bays and main gear units are pretty decent and it’s good to see that they are fine for the scale here.

The clear parts look clear and the canopy can be displayed open. The parts are clear and no defects apparent.

The Revell instructions follow their usual exploded stages format. Location of parts is clear but colour paint coding is for Revell paints only – unhelpful. The build sequence is pretty standard and logical but many modellers will part company with the stated order to suit their experience.

The decals look to be good quality, although it’s disappointing that only two US aircraft can be built and finished; it would have been good to see maybe a Canadian machine here too? Stencil detail is also provided and is almost always well worth adding, even in 1:72 scale to add additional interest to your completed model, but I suspect you’ll have your own views on this. All the colours are in register and colour density looks impressive and carrier film limited, so I wouldn’t expect any problems with application.

This is a great subject should sell well again this time around and be popular with modellers, especially those that have an interest in all things United States of America. The lack of decal options for at least one other air arm is unfortunate. The model looks to be well engineered at first glance and from the dry/test-fit. Moulding is good and the panel detail perfectly reasonable for current 1:72 scale kits.
Recommended for all scale modellers