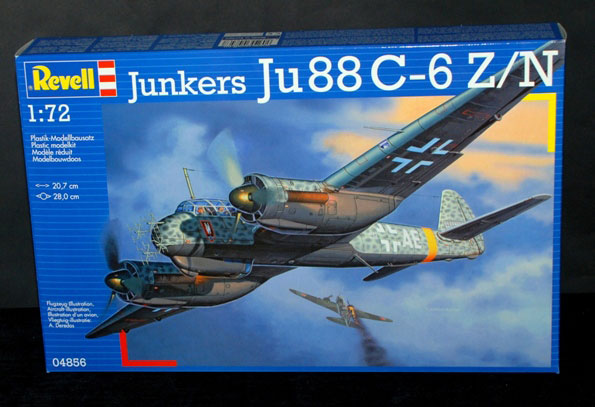 Here’s some useful reference for you…

Background to the Junkers Ju 88

The Junkers Ju 88 was initially designed as a fast bomber with long range capability. Awarding a contract for a new attack aircraft the RLM (Imperial Aviation Ministry) decided in favour of the Ju 88, which only needed slight modification in order to fulfil this role. Instead of the glazed nose section a new flat metal nose was fitted which housed three MG 17’s and either one MG FF or an MG 151/20. As a substitute for the Bf 110 attack aircraft a night fighter version based on the Ju 88C was introduced and entered service as the Ju 88 C-6. When the first night surveillance equipment – FuG 202 “Lichtenstein” came into service this was also fitted to the Ju 88C-6. By the end of the War and Including the Ju 88C Night Fighter version, a total of 3964 Ju 88 night and attack fighters were manufactured.

You already have a review in your Here Now area for the Revell Ju 88A-4 that we did towards the end of 2011 so that’s worth a look for the detail differences between this kit and the earlier bomber version. My intention here then is to make a few observations about this boxing and then it’s over to you! 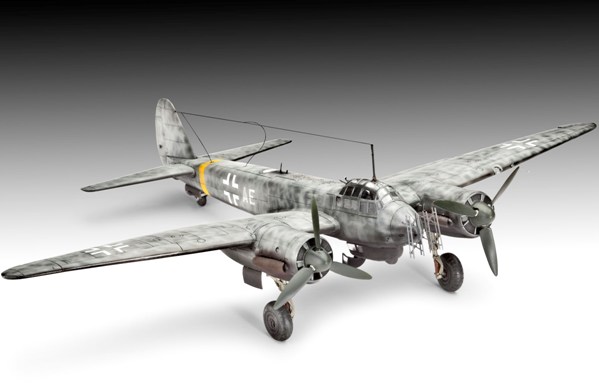 This looks like a very nice boxing containing most of the sprues that came in the original kit but this time including additional new sprues for the night fighter and destroyer.

The box is pretty packed with these, light grey sprue frames and the best thing to do is show them to you here:

So, what do you think? Well, overall I’m pretty impressed with what’s inside. The cockpit looks to be very well appointed which is just as well because the Ju-88, like the He 111 has a greenhouse for a cockpit and you’ll be able to see most of it, even in 1:72 scale. New parts like those for the radar operator are included and you get the decals for the main instrument panels although raised detail is moulded too so you can take your pick as to which way to go.

These are in classic Revell style with exploded stages – all 61 of them but be careful to use the correct parts for your chosen version as numbering and lettering is sometimes unclear; it all gets a but busy on some of the smaller sectional diagrams.

Decals quality is pretty good as mentioned, the colours are solid with decent opacity and markings are in register. That carrier film is going to be hard to lose in this scale if you apply them as is, so I plan to trim most of it off and, as the instructions suggest, use a decal softener like Micro Set and Sol. A good range of stencils is also provided, so no need to go to for aftermarket supplies here.

I don’t have a lot of references for the Ju 88C-6 (unlike just about everything else Luftwaffe, except the He 111!) so we are reduced to what I have and the Mark 1 Eyeball. It certainly looks right from most of the angles I have tried. After a dry-fit and taping this is unmistakably an accurate-looking Junkers Ju 88C-6.

Well I hope that this Here Now in-box review says enough for you to make your buying decision. The package is clearly well worth the money (significantly cheaper than the Hasegawa kit if you can get hold of it) in my opinion and there is going to be a lot of modelling fun and pleasure for your money. We’ve waited a long time for a good quality, detailed Junkers Ju 88C-6 at this price level and Revell has filled that gap very nicely.