The Sopwith 5F.1 Dolphin was one of a number of fighters designed in 1917 to use the then promising Hispano Suiza 200hp engine. The use of an inline engine marked a change of practice for the Sopwith company which had previously used rotary engines (although the Hispano Suiza had also been used by Sopwith in an unsuccessful triplane design).

The design of the Dolphin took account of a criticism levelled at its predecessor, the Sopwith Camel, which afforded its pilot a very limited field of view. The Camel pilot’s position under the top wing with two Vickers machine guns positioned only inches from his face meant that in a tight turn he could not actually see where he was going. To get around this problem the Dolphin was designed with no upper centre section. The fuselage completely filled the interplane gap with the pilot sitting in a frame between the two upper wings. The lower wing had to be positioned in front of the upper wing giving the aircraft an ungainly (though perfectly practical) ‘backward stagger’. This arrangement gave the Dolphin pilots an uninterrupted view in all upper directions, although the downward view was restricted somewhat by the position of the lower wing.

Whilst initially promising, the Hispano Suiza engine proved troublesome and unreliable in service. Only four operational squadrons were equipped with the Dolphin on the Western front. However, with a properly serviced engine the Sopwith Dolphin proved to be a very capable fighter, regarded by many as the best British fighter of the First World War.

The Dolphin was withdrawn from service soon after the armistice with little coming of proposed large-scale manufacture and use by France and America.

No intact Sopwith Dolphin survives today. However, a replica built using components from several original aircraft may be seen at the RAF Museum. 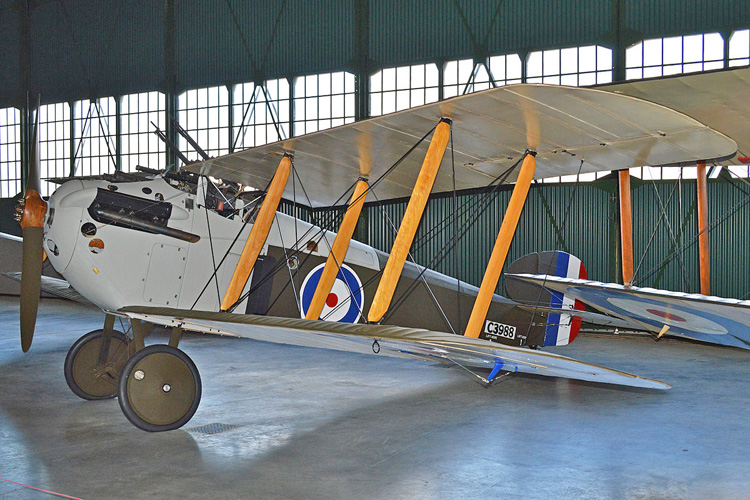 The recently released Wingnut Wings kit of the Sopwith Dolphin seems to have come as something of an unexpected, but most welcome, Christmas surprise for many modellers.

As far as I am aware this is the first time a kit of the Dolphin has ever been available in 1:32, let alone one of this standard!

The kit is a typically high-quality Wingnut production with even the picture on the box top being very impressive. 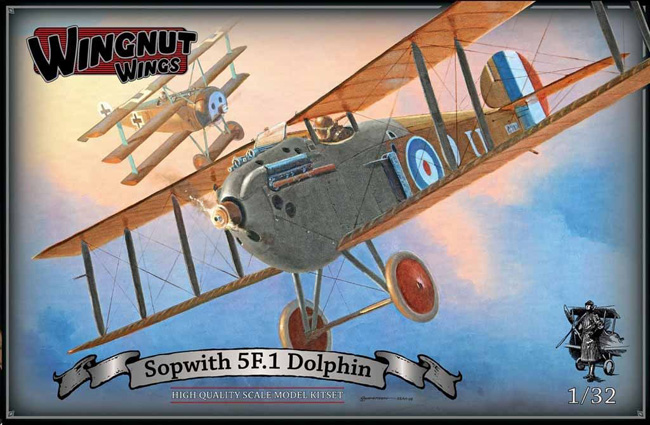 The part count is small for such a large model with only around 130 or so parts spread across five sprues. The mouldings are excellent with all the finesse we have come to expect from this manufacturer.

Among the many high points of the kit are the flying surfaces. The rib detail complete with tapes and nails is incredibly fine. The trailing edges are very sharp indeed and care will need to be taken when removing these parts from the sprues in order not to damage them. The lower wings are moulded integrally with the centre section, with the correct dihedral already set in place.

Parts are included for early and late versions of the Dolphin and the modeller will need to choose the particular aircraft they wish to model early on in the construction sequence. Two types of propeller are provided as well as the two types of tail skid used. Two different types of radiator are also included. An unused cowling on one of the sprues suggests that another version of the kit may be available in the future? 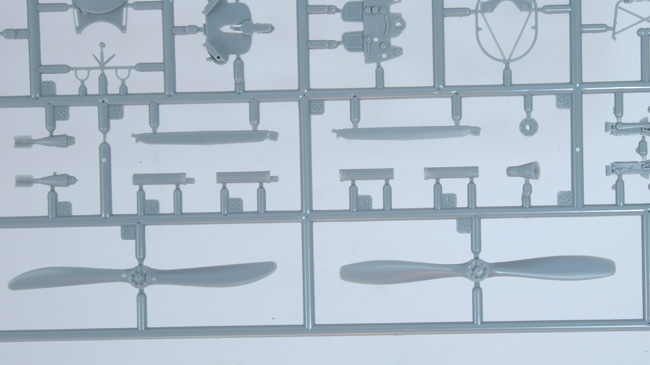 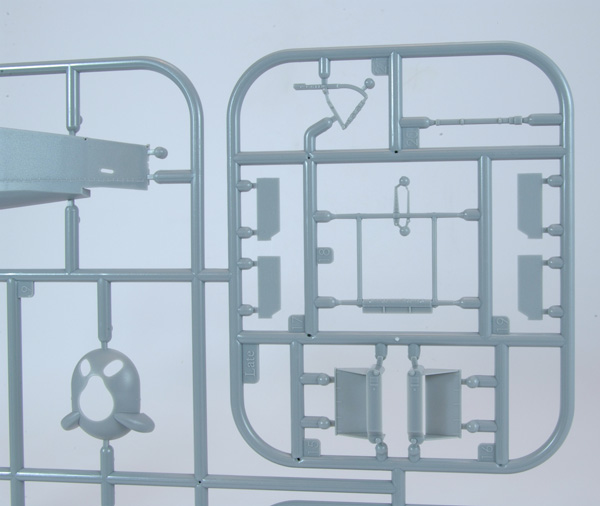 The Dolphin was a heavily armed aircraft for its time. It carried two fixed Vickers guns and two semi-moveable Lewis guns as standard (although it was found that using the Lewis guns was impractical in combat and often only one was carried as a weapon of last resort). Wingnut provides all of these guns as well as the two wing-mounted Lewis guns used on some aircraft from No. 87 Squadron. A set of Cooper bombs is also included along with the appropriate carrying rack as the Dolphin, although designed as a high-altitude fighter, was sometimes pressed into service for use in dangerous low-level ground attack missions.

The small clear sprue holds the windscreen and the transparent covers for the control wire inspection windows in the wings.

A small brass fret is provided containing seat belts, some details such as cocking handles for the Vickers guns and the reinforced surround for the step on the side of the fuselage. Some may choose to replace the seat belts with fabric items as the kit items appear quite stiff – though annealing them may make them a little more flexible. 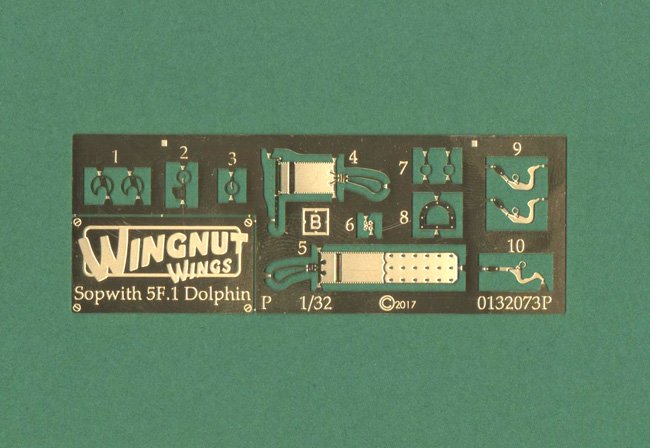 The instruction booklet follows the usual Wingnut format. It is in colour and is clear and concise. Wartime photos are also included for reference which serve to illustrate some of the points made in the instructions. 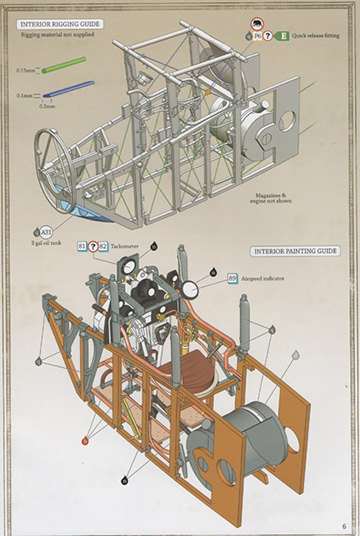 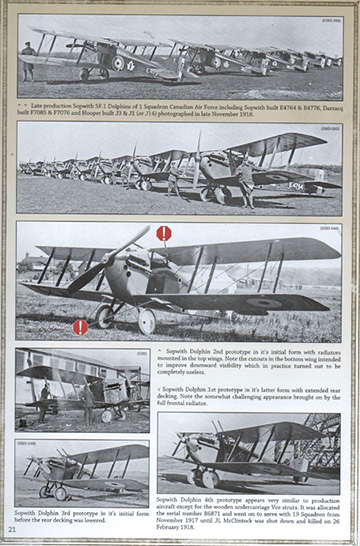 With some modelling projects I deviate from the kit instructions and take the approach of putting together the larger parts before adding the smaller more delicate parts. The instructions in these cases are used as a guide to part placement rather than as a construction sequence. Having built a few Wingnut kits I would not advise taking this approach here. The build requires a more ‘modular’ approach where parts are painted before being brought together as subassemblies and I think that in this case the instructions should be studied carefully and followed to the letter.

Painting references (including suggestions for the ever contentious PC10 upper surface colour) are to be found throughout the instructions. These refer to both Tamiya and Humbrol colours (with some mixing of colours being necessary). Federal Standard paint reference numbers are also included for those using other types of paint. For those with misgivings regarding the shade of PC10 to be used perhaps a set of the excellent Aviattik fabric transfers could come to the rescue?

There are markings for five aircraft provided in the kit, though doubtless companies such as Pheon will provide some alternatives in the future. The markings cover four early production and one late production aircraft. They look to be thin and in perfect register. 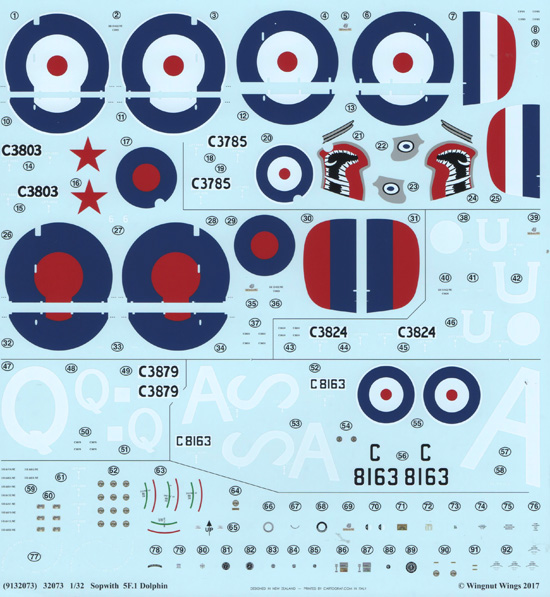 Aside from glue and paint the only things that the modeller will need to supply will be some filler (a few holes need to be drilled or filled depending on the version of the aircraft that you decide to make) and rigging material.

A comprehensive rigging diagram is provided in the instructions. Wingnut suggests deepening the rigging attachment points using a 0.5mm drill and using an elastic material such as EZ Line for the rigging itself, bearing in mind that some of the rigging / control wires had an aerofoil cross-section whilst others had a round cross-section. Another feature to be considered is that the Sopwith Dolphin did not appear to have had turnbuckles on its rigging. These features do not seem to be shown clearly on wartime photos. Perhaps study of photos of the replica Dolphin at the RAF museum will provide ideas on how best to tackle the rigging.

At the time of writing, a set of photos of this replica, including some of the cockpit, courtesy of Francis Chapman is available on the internet at:-
https://forum.ww1aircraftmodels.com/index.php?topic=331.0 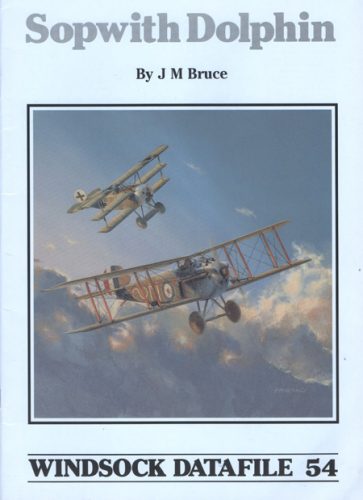 Another excellent reference which could be useful for this project, if you can get your hands on a copy, is Windsock Datafile No 54 by J. M. Bruce. This contains many wartime photos of the Dolphin and an in-depth description of its development and operational use as well as plans for those inclined to check the dimensions of the kit.

All in all, this looks like a fantastic kit which, with care, will build into a large and impressive model. Wingnut Wings continues to impress with each new release and I look forward to building this kit in the near future.