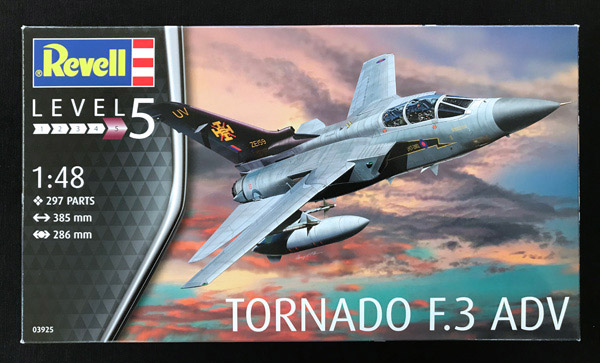 The Panavia Tornado Air Defence Variant (ADV) was a long-range, twin-engine interceptor version of the swing-wing Panavia Tornado. The aircraft’s first flight was on 27 October 1979, and it entered service with the Royal Air Force (RAF) in 1986. It was also previously operated by the Italian Air Force (AMI) and the Royal Saudi Air Force(RSAF).

The Tornado ADV was originally designed to intercept Soviet bombers as they were traversing across the North Sea with the aim of preventing a successful air-launched nuclear attack against the United Kingdom. In this capacity, it was equipped with a powerful radar and beyond-visual-range missiles, however initial aircraft produced to the F2 standard lacked radars due to development issues. The follow-up F3 standard was the definitive variant used by the RAF, as well as all Tornado ADV aircraft that were leased by the AMI and procured by the RSAF.

During its service life, the Tornado ADV received several upgrade programmes which enhanced its aerial capabilities and enabled it to perform the Suppression of Enemy Air Defenses (SEAD) mission in addition to its interceptor duties. Ulti-mately, both the RAF and RSAF retired their Tornado ADV fleets; the type has been replaced in both services by the newer, multi-role Eurofighter Typhoon.

We already have a build of the IDS on which this kit is based…
You may remember that James V built a GR4 from the IDS kit release with some mods here and there and you can see that model in the Revell pages in Finished Now.

Dave C has also completed a full build of the GR.4 kit and you’ll find that in the Revell pages in Aircraft-Finished Now – here.

Nice to see the F.3 ADV variant of the famous Tornado back in 1:48 scale and this model pushes the bar up considerably over previous offerings. The Revell kit has gained much praise amongst modellers since it was released in IDS guise back in 2015 although the build has challenges for sure. If you take a good look at both the IDS/GR.4 builds we have you’ll find any fixes that you need for completing this new F.3 ADV version to a high standard.. 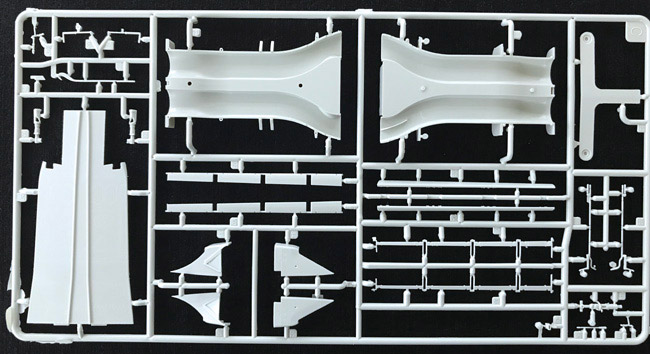 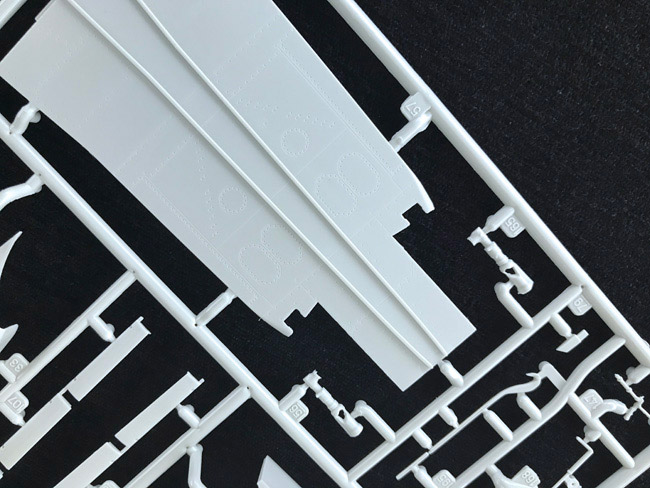 The Revell box artwork is usually impressive enough and that’s the case here – an image of a No 111 Sqn RAF anniversary aircraft making an attractive subject.

Well moulded light grey sprues supplied and taking the main components first, they are well tooled, fine recessed panel line detail and good levels of detail across the board. No distortion on the main parts is apparent and a dry fit of the multi-part main fuselage sec-tions suggests a decent fit; the initial impression is one of detail parts that will go to make up a nice representative model in 1:48 scale. No real evidence of excess flash on the parts supplied in this kit.

We first saw this model in the flesh at the IPMS Uk Scale Model World, Telford UK Novem-ber 2017. It caused quite a stir and some thought that the nose profile looks off but I’m sure that’s because the model was being viewed from above. I’ve now had a chance to look at the model and multiple photos of the real thing and Revell’s new F.3 looks just fine to me.

If you need more reassurance, simply spend a few minutes on Google Images for: Panavia Tornado F.3 ADV – I can across hundreds of images showing the F.3 nose from different an-gles and Revell’s interpretation stacks up well – that’s more than enough for me!
On a final note about this point check out the images on this link and the last one at the bottom of the page – really helpful as it shows how the nose section tapers in considerably http://www.electric-image.co.uk/ukairshow/panavia/adv.html

Raised detail on the cockpit panels is provided as well as decals; the cockpit looks pretty reasonable from the box. The other internals like the control columns are well detailed too as you can see from the attached photos and will add a fair bit to the eventual look. The seats look good as does the area between the crew positions.

You get a decent depth tube for the exhaust jet pipes along with the detailed reheat nozzles typical of the type.

• undercarriage units are well detailed and the model seems to sit correctly when viewed from different angles
• wheel wells offer basic detail that will satisfy most modellers
• the weapons and stores included in the kit offer a good range: 2 X AIM 9L Sidewinder py-lons (the fins on the missiles aren’t very accurate in profile but easily adapted); BOZ 107 pod; 2 X 2250 ltr “Hindenburger” wing tanks; 2 X 1500 ltr tanks; Skyshadow pod; 4 X Skyflash AAMs
• ‘dropped-flaps’ option – flaps are provided so you can pose them in the dropped position or closed up. I think they look great deployed even if they aren’t strictly accurate or in ac-cordance with SOPs (who cares if your model looks better to you!)
• upper fuselage speed brakes can be posed open. 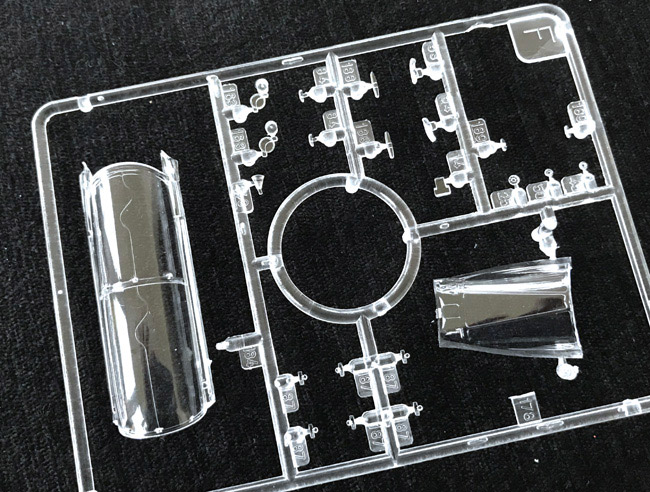 The clear parts look clear and defect-free. Looking at the manufacturer’s model the canopy fit looks ok and the MDC in the canopy is refined and in keeping with the scale – a big plus for the model in my view as this is often overdone in other kits. It’s nice to be able to dis-play your model with canopy open and see all the decent detail within.

The Revell instructions are in the now familiar light blue booklet style and much higher quality than the old black and white printed versions. Location of parts is clear but colour paint coding is for Revell paints only. You’ll have to match your own choice of paints if you go elsewhere for your choice of colour. The build sequence is pretty standard and logical but many modellers will part company with the stated order to suit their experience. 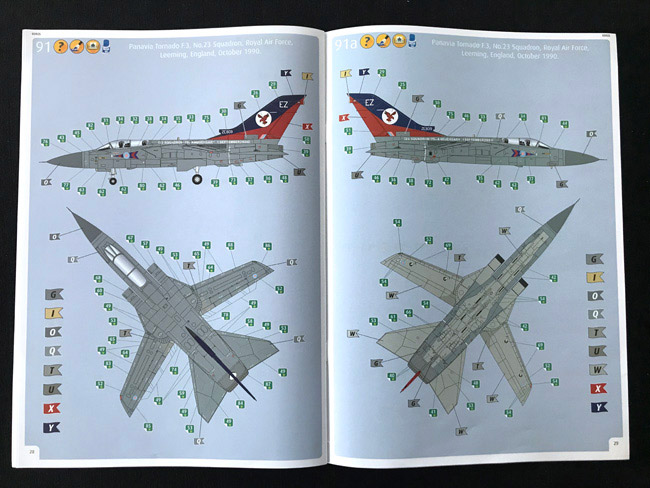 The back of the box has additional colour and painting guidance and all in all the instruc-tions are definitely a step forward for Revell.

This is a great subject and it’s great to have another Tornado, this time in full RAF fit. This model will provide all military fans, especially those with an interest in RAF model aircraft or modern military subjects with a great new addition to their collection.
The model itself looks to be well engineered from the dry/test-fit. Moulding is good and the recessed panel detail very good as is the detail overall.
Geoff C.

The Tornado F3 made its maiden flight on 20 November 1985. Enhancements over the F2 included RB.199 Mk 104 engines, which were optimised for high-altitude use with longer afterburner nozzles, the capacity to carry four under-wing Sidewindermissiles rather than two, and automatic wing sweep control. The F3’s primary armament when it was introduced into service was the short-range Sidewinder and the medium-range Skyflash missiles, a British design based on the American AIM-7 Sparrow.

In order to maintain the Tornado F3 as an effective platform up to its planned out-of-service date of 2010, the Ministry of Defence initiated the Capability Sus-tainment Programme (CSP). This project, announced on 5 March 1996, involved many elements, including the integration of ASRAAM and AIM-120 AMRAAM air-to-air missiles, and radar upgrades to improve multi-target engagement. Additional-ly, pilot and navigator displays would be improved, along with the replacement of several of the onboard computer systems. The CSP would see the removal of a non-standard state of aircraft; various upgrades, in particular to the Foxhunter radar, had led to a situation described as “fleets within fleets”. The Foxhunter radar was a source of difficulties in the upgrade programme, in particular the integration of the new AMRAAM missile.

The Tornado F3 was not able to exploit the full capabilities of either the AM-RAAM or ASRAAM missiles. AMRAAM uses two mid-course updates after launch to refresh target information prior to its own seeker taking over; however, the CSP did not include the datalink to provide this capability, as it was considered to be too expensive. In addition, the ASRAAM was not fully integrated, which prevent-ed the full off-boresight capability of the missile being exploited. On 8 June 2001, the MoD signed a contract for a further upgrade to the F3 force to allow these midcourse updates. The upgrade to give full AMRAAM capability, together with updated IFF, known as the AMRAAM Optimisation Programme (AOP) was in-corporated in the remaining F3 fleet between December 2003 and September 2006.

A further upgrade, disclosed in early 2003, was the integration of the ALARM anti-radiation missile to enable several Tornado ADVs to con-duct Suppression of Enemy Air Defenses (SEAD) missions. The F3’s existing radar warning receivers formed the basis of an Emission Location System (ELS), which can be employed to detect and locate operational radar systems in the aircraft’s vicinity. These modified aircraft were re-designated Tornado EF3 and operated by No. 11 Squadron RAF.