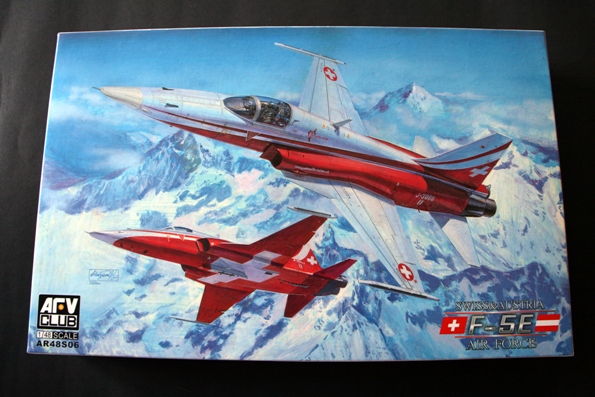 The Northrop F-5 has proved to be a popular choice amongst smaller air forces around the world, many having purchased them new or as second-hand examples.

Amongst these, the Swiss Air Force purchased 110 F-5E/Fs, the first ordered in 1976 and the last delivered in March 1985. The Austrian Air Force needed a stopgap fighter to fill the gap between the Draken’s retirement in 2005, and the delivery of new Eurofighter Typhoons; as such, 12 F-5Es were loaned from the Swiss until 2008.

This kit of the F-5 is the latest in the growing series of F-5 variants produced by this manufacturer.

The F-5E/F-5N VFC-111 ‘Sundowners’ version has been reviewed elsewhere in this magazine, so much in that article applies here.

The box is substantial and the parts fill it nicely. It also contains an A4 colour print of the box art, which is a nice touch. There are 7 marking options, which are:

Note that the instructions do not give you the unit designations; I’ve researched these for the purposes of this review.

It’s a broad choice of marking options, with subtle scheme variations amongst the grey jets. It would have been nice though to have alternative airframe numbers and crew names for the Patrouille Suisse option.

There are 7 sprues of grey plastic parts plus the rear fuselage and burner cans in a separate bag, one sprue of clear parts, 4 vinyl bushes and a small PE fret; around 200 parts in all.

The clear sprue includes an additional canopy for this version, and one of the grey sprues contains the version-specific specific parts. All sprues/parts are bagged separately, so it’s all nice and secure.

As the aerobatic team jets are operational frames, they do fly with practice weapons and transit with fuel tanks, so some interesting fit/colour variations would be appropriate.

Click on the Thumbnails to enlarge the images below and enjoy the kit contents in full!

The instructions are clear, with colours called out throughout the build process.

Interestingly, AFV Club would have you paint the red and white elements of the Patrouille Suisse scheme part way through the build, which you’d only do it the fit was completely seamless.

It’s also clear that some thought will have to be put towards the intakes, as there is no trunking.

An omission from the instructions is the fitting of the cannon barrels (parts A33), which are on the sprues and do remain applicable to these versions.

Like the ‘Sundowners’ kit, the decal placement and colour guides are disappointingly gray-scale, although the colour profiles on the box sides are a small compensation.

The decals are well printed and in register. They are, however, matt and have a fair amount of carrier film, so will need trimming I’d imagine.

A good attempt has been made to replicate the motion-blurred stylised Swiss cross on the underside of the Patrouille Suisse jet, and it will be interesting to see how the red in the decals matches up to whatever paint the modeller would use.

Overall, this really is an excellent package and a natural addition to AFV Club’s F-5 range.

The parts are well moulded and detail looks about right; a good standard model should be able to be made from out of the box. As such, this kit is highly recommended.

I was grateful to our esteemed Editor for passing me this example at Scale Model World, and as he also slipped me OH Models’ Patrouille Suisse decal sheet, you can look forward to a build review incorporating these two items soon…