On opening the box it is pretty apparent that this model (not surprisingly) contains a lot of parts, with detail included for areas like the internal canopy rails, detailed undercarriage and cockpit, thrust reversers and most importantly, a fully detailed slats and flaps set. Weapons are included but these are tailored for the German IDS model. Included in the kit but not mentioned in the instructions are 2 X BOZ pods, 1 X Skyshadow Pod and the FLIR & LRMTS pods are all included (with the exception of the glazing for the FLIR).

The instructions are as per the usual Revell standard with 94 sequences to follow inclusive of the decal application.

The cockpit looks busy enough with two Martin Baker Mk 10 ejection seats and includes a separate main instrument and side panels. The seats themselves do not look correct as the head-box seems to be too small in width; I am sure you will be aware that there are a vast number of aftermarket suppliers that can supply alternatives and therefore this is down to your discretion to how it is finished. The moulded raised detail is ok and once you paint and weather these they should be acceptable. Decals are included for the Multi Function Displays (MFD’s) although these usually seem to look toy-like in this scale and I usually opt to display the model in an idle mode. There is more detail in the real aircraft and so you have some scope to add plenty of smaller items yourself.

The seats have a moulded harness but do not really look convincing and could benefit from an aftermarket seat being used. Due to the vast space that the open canopy yields, I would recommend these to be replaced; the aftermarket companies have plenty of these seats available.

A vast array of weapons is included within the build, catering more for the European Standard including the German air-to-air refuelling system, jamming pod and AIM-9L Sidewinder missiles. As mentioned above, the kit includes the BOZ and Skyshadow Pods, though these are not listed on the build but can be found on the sprues. The kit does lack the latest weapon technology which is integrated for the GR4 but this can be found in the most recent Eurofighter kit or through the aftermarket companies. 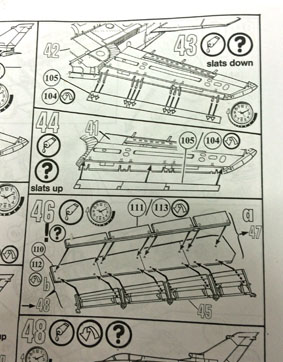 It would not be a Tornado model if the iconic slats and flaps set were not mentioned. Modellers in the past will know too well that going back a few years that major surgery to the wing and wing gloves with expensive Paragon parts were required if you wanted to reproduce the model in the parked flaps-and-slats-down configuration. Although Hobbyboss were the first to produce this in injection moulding, Revell have raised the game somewhat with a highly details slat and flap mechanism. Be sure to read the full review on how to install these as the parts are fragile and cutting them off the sprues will be a challenge in itself!

The undercarriage legs look fine and they have reasonable detail but would benefit from hydraulic lines. The wheels themselves are good in detail but the rear wheels seem a bit too wide and have no tread included and the front wheels seem a little thin, saying that, the wheel rims do look more detailed than those produced on previous manufactures kits. A raised lip to the wheel hubs always helps painting and these are included. 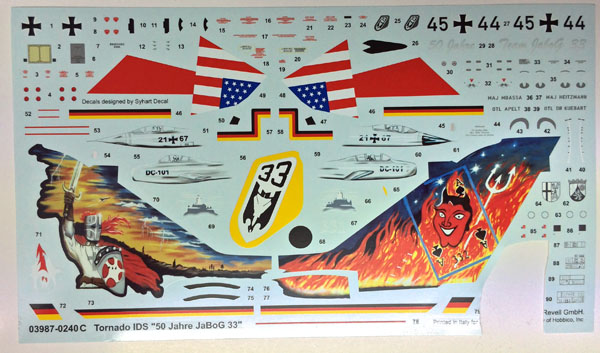 One scheme is included within the kit; this being 45+44 “50 Jahre JaBog 33”, 2008, Buchel and is a special scheme which the German Air Force are famous for producing. The decals themselves look well set and thin and should be easy to set in place. 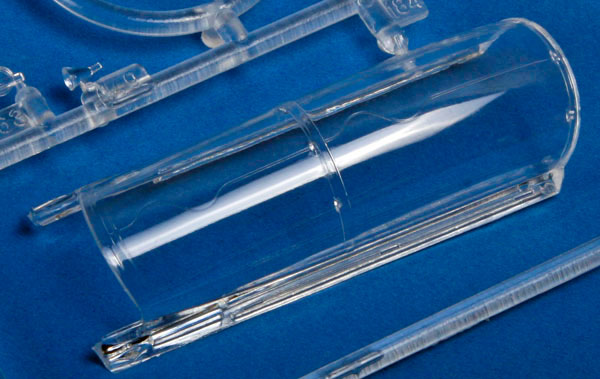 The clear parts look clear, very clear in fact with no defects apparent. Something that will require work is the canopy as this is cast with a seam line being integrated with the detonation cord in the middle of the canopy. However SMN does have an HD video demo to show how to easily get rid of the seam line and restore perfect clarity in the clear part. ☺

A welcome new tool which I am sure will sell thick and fast. There is plenty of detail and weapons are aplenty and the model will appeal to those who like the type, although this may not be the best model for new scale modellers due to its complexity and some fine, fiddly parts. It will be very welcome to anyone with a few models under their belt of course, as well as more experienced modellers who may wish to add more detail.

At the RRP of £22.99 the kit also is superbly priced to build a good quality model out of the box. I am sure this will be a popular build. Be sure to look out in the future for this build with a few twists in the build including a few extra resin parts and a different scheme!
James V.