One thing you immediately notice that Airfix has moulded the Daimler Benz engine at all, in this instance being an integral part of the forward fuselage. The basics are there in terms of detail and the engine cowl is moulded separately so that you can add and remove the cover at will – a nice touch. Three different types of spinner are included and that’s excellent, enabling you to complete several more options from your decal store.

The tropical filter is also included that when used with an appropriate spinner will enable you to build an E-7 and this is of course appropriate to the markings presented this time.

Moving aft the cockpit tub at first glance looks sparse, but in fact much of the detail you’d expect to find like control column, trim wheels and so on is in fact included but is located around the sprue trees. So I suspect that the cockpit will make up into a perfectly reasonable representation of the real thing. The light tones of the RLM 02 grey-green interior colour should show up the raised detail well. I’m not sure about the shape of the seat though, and this may look a little better with some light sanding. It’s the way the side looks pinched in at the top that’s slightly dubious and so I would check your references on this one. A pretty straightforward fix though with sanding as I say.

The moulded in seat harness is a bit unconvincing but will be easily improved by scraping off the raised detail and adding your own – either an etched set of belts or scratch your own from metal foil (old wine bottle tops work really well) and are a cheaper alternative.

If you like your pilot figures, then you’ll find Maj. Adolf Galland or one of the other ‘experten’ on the sprue and he’s nicely moulded, with detail a little soft.

Something to watch inside the cockpit fuselage halves are some prominent ejector pin marks and these need to be removed by sanding down with sanding sticks or wet and dry abrasive paper (dark grey sanding paper found in painting and decorating or car repair product isles of stores).

Good options included here with separate units designed for raised or lowered gear and also a nice pair of slightly bulged main wheel tyres that also feature the often seen groove detail. The main gear legs will benefit from adding a brake line down each one – a prominent feature of the Bf-109.

The fabric control surfaces fitted to early Bf-109s has been captured well by Airfix. With a little rough-sanding to help create the fabric effect, they should look good under paint.

Nice looking these – both armoured and non-armoured windscreens are included as are the two types of canopy ‘square’ and ‘round’ edged. The latter more usually seen on the E-1-3 and the square on the E-4 and later E-7, but as with many aircraft in WWII Luftwaffe service there were exceptions. So depending on the version you choose to finish your 109 in, check the paint guide for an accurate steer.

The instructions are logical and well laid out. Each option is clearly identified and you are reminded as you go what parts are appropriate depending on your choice of E-4 or E-1.

Two different aircraft are featured with this release: 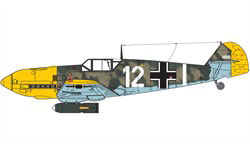 Option A – Messerschmitt Bf109E-4, “White 12” aircraft flown by Unteroffizier Ernst Poschenrieder, 7./JG53, based at Le Touquest-Etaples. Aircraft was shot down and crash-landed at Broom Hill, Kent on September 30th, 1940 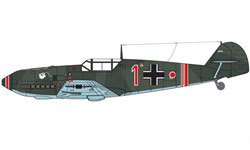 Option B – Messerschmitt Bf109E-1, “Red 1” aircraft flown by Oberleutnant Hannes Trautloft, 2./JG77, Germany, August 1939
The decal sheet is well printed with all markings/colours in register. Now there’s good and bad news to report on quality. Having built and tried to use the kit decal sheet in their first release the decals were simply unusable as supplied and they do appear to be similar again here too, but I may be wrong, maybe they will settle down and go on better this time – you’ll have to see. This time they again feel too thick with heavy carrier film that didn’t settle down at all with setting solutions like Micro Set and Sol. So what’s the good news? Well, my understanding is that Airfix are doing their best to be able to continue their new trend of including Cartograf decals with their new releases. Hopefully this will extend as soon as possible to all products currently in their range.

A good addition to what’s already available. The recessed detail, control surfaces and bulged tyres are all positive, as is the choice of decals. I can live with small issues like the seat shape that is easily rectified, so, all in all a nice new kit beautifully presented. The decals as supplied appear poor quality and may need to be replaced and that’s seriously disappointing.