I know that Ian C. has kindly agreed to add some observations and comments and I’ll add those too here when I get them – there’s not much he doesn’t know about the type (no pressure Ian :) ).

When looking at the Airfix website I notice that they are encouraging comments and reviews of this kit and one or two guys (at the time of looking) had commented that the aircraft depicted on the box lacks various aerials and antennae associated with the type, although I’m sure that these could easily be added if this is the case. You may be aware of other things to note and I’d be pleased to hear them so that we can add them to my review here but please, be sure of your references before sending through any ‘criticism’, however well intentioned. You can e-mail me directly at: geoff@scalemodellingnow.com Thanks. 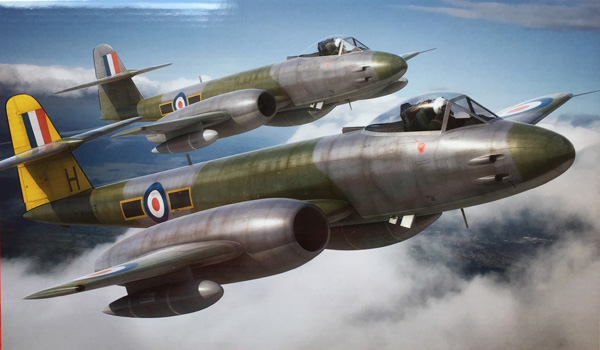 A little bit of background to the Gloster Meteor fighter…

The Gloster Meteor was the first British jet fighter and the Allies’ only operational jet aircraft during the Second World War. The Meteor’s development was heavily reliant on its ground-breaking turbojet engines, pioneered by Sir Frank Whittle and his company, Power Jets Ltd. Development of the aircraft itself began in 1940, although work on the engines had been under way since 1936. The Meteor first flew in 1943 and commenced operations on 27 July 1944 with No. 616 Squadron RAF. Nicknamed the “Meatbox”, the Meteor was not a sophisticated aircraft in its aerodynamics, but proved to be a successful combat fighter.

Several major variants of the Meteor incorporated technological advances during the 1940s and 1950s. Thousands of Meteors were built to fly with the RAF and other air forces and remained in use for several decades. The Meteor saw limited action in the Second World War. Meteors of the Royal Australian Air Force (RAAF) fought in the Korean War. Several other operators such as Argentina, Egypt and Israel flew Meteors in later regional conflicts. Specialised variants of the Meteor were developed for use in photographic aerial reconnaissance and as night fighters.

The Meteor was also used for research and development purposes and to break several aviation records. On 7 November 1945, the first official air speed record by a jet aircraft was set by a Meteor F.3 of 606 miles per hour (975 km/h). In 1946, this record was broken when a Meteor F.4 reached a speed of 616 mph (991 km/h). Other performance-related records were broken in categories including flight time endurance, rate of climb, and speed. On 20 September 1945, a heavily modified Meteor I, powered by two Rolls-Royce Trent turbine engines driving propellers, became the first turboprop aircraft to fly. On 10 February 1954, a specially adapted Meteor F.8, the “Meteor Prone Pilot”, which placed the pilot into a prone position to counteract inertial forces, took its first flight.

In the 1950s, the Meteor became increasingly obsolete as more nations introduced jet fighters, many of these newcomers having adopted a swept wing instead of the Meteor’s conventional straight wing; in RAF service, the Meteor was replaced by newer types such as the Hawker Hunter and Gloster Javelin. As of 2013, two Meteors, WL419 and WA638, remain in active service with the Martin-Baker company as ejection seat testbeds. Two further aircraft in the UK remain airworthy, as does another in Australia.

As improved jet fighters emerged, Gloster decided to modernise the F.4 while retaining as much of the manufacturing tooling as possible. The result was the definitive production model, the Meteor F.8 (G-41-K), serving as a major RAF fighter until the introduction of the Hawker Hunter and the Supermarine Swift. The first prototype F.8 was a modified F.4, followed by a true prototype, VT150, that flew on 12 October 1948 at Moreton Valence. Flight testing of the F.8 prototype led to the discovery of an aerodynamic problem: after ammunition was expended, the aircraft became tail-heavy and unstable around the pitch axis due to the weight of fuel in fuselage tanks no longer being balanced by the ammunition. Gloster solved the problem by substituting the tail of the abortive “G 42” single-engined jet fighter. The F.8 and other production variants successfully used the new tail design, giving the later Meteors a distinctive appearance, with taller straighter edges compared with the rounded tail of the F.4s and earlier marks.

The F.8 also featured a fuselage stretch of 76 centimetres (30 inches), intended to shift the aircraft’s centre of gravity and also eliminate the use of ballast former necessary in earlier marks. The F.8 incorporated uprated engines, Derwent 8s, with 16 kN (1,633 kgp / 3,600 lbf) thrust each combined with structural strengthening, a Martin Baker ejection seat and a “blown” teardrop cockpit canopy that provided improved pilot visibility. Between 1950 and 1955, the Meteor F.8 was the mainstay of RAF Fighter Command, and served with distinction in combat in Korea with the RAAF as well as operating with many air forces worldwide, although it was clear that the original design was obsolete compared with contemporary swept-wing fighters such as the North American F-86 Sabre and the Soviet MiG-15.

Initial deliveries of the F.8 to the RAF were in August 1949, with the first squadron receiving its fighters in late 1950. Like the F.4, there were strong export sales of the F.8. Belgium ordered 240 aircraft, the majority assembled in The Netherlands by Fokker. The Netherlands had 160 F.8s, equipping seven squadrons until 1955. Denmark had 20, ordered in 1951; they were to be the last F.8s in front line service in Europe. The RAAF ordered 94 F.8s, which served in the Korean War. Despite arms embargoes, both Syria and Egypt received F.8s from 1952, as did Israel, each using their respective Meteors during the Suez Crisis. Brazil ordered 60 new Meteor F.8s and 10 T.7 trainers in October 1952, paying with 15,000 tons of raw cotton.