What you get is all you need to build a very detailed representation of the type. ZM kits have been getting better and better and if you take a look at Aaron S’s beautiful build of their 1:32 Horten Ho 229 in Finished Now you’ll see what I mean

… he loved that build and as it is one of this manufacturer’s latest releases as I write, I have high hopes for this Do 335 – especially now having seen the photos of the completed model above – just makes you want to start it right now!

Let’s take a look at the clear parts first…

As you can see the recessed detail is very fine and precise. Levels of detail across the board are out of the top drawer too – you can see the side wall internal detail moulded into the fuselage sides but this is only the beginning. There are many other sections moulded in grey plastic that go to make up the full detail in the cockpit, bomb bay, wheel wells, flap internals and engine bays – both of those. 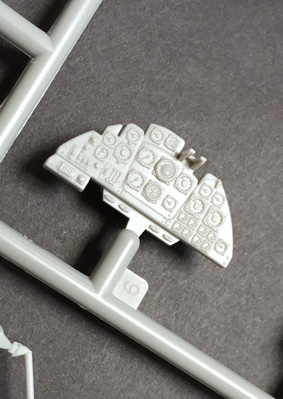 The option for a clear instrument panel is included where you apply the decal instrument faces to the back of the panel that has holes moulded in, allowing you to paint it in the usual way. Alternatively, you can use the grey-moulded part that has raised detail to paint – your call and nice to have the choice.

You can see that the major components like fuselage and wing halves, engine cowls and so on are supplied in clear styrene, allowing you that view into all the internal structures.

These are moulded perfectly clear and undamaged, thanks to wrapping separately as is usual these days. You have the option to display the canopy open that will be a must for me, given the high level of detail within. 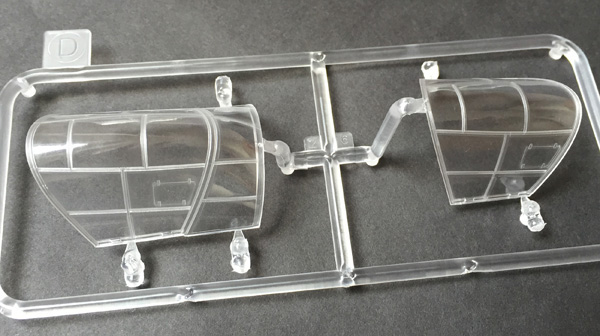 The grey sprues contain pretty much all the detail parts for every area of the aircraft: DB 603 engines, drive shafts, cockpit, undercarriage, gun bays etc etc, you can see what’s on offer as much as I can, so just enjoy exploring the photos that show all the sprues and what’s on offer…

All the internal wing ribbing, wheel wells and landing retraction gear is there – the latter has fine detail like the brake lines included and should look great in this scale. While on the wheels, check out that hub detail – incredibly fine definition to the wheel spokes. Also notable is the separate moulded plastic seat harness that looks ok, although you may want to replace it with your own items from one of the aftermarket manufacturers.

One of the many things I like about the aircraft as supplied is the ability to pose multiple panels open, exposing the engines and bomb bay as examples – not always a great fan of this but I think Sampson has captured the essence of building one of these great ZM kits – open some of the panels and doors and paint the main components like the wings and fuselage. Adding the flaps in the dropped position will further add interest and so you have many options to finish your Do 335A-0 exactly as you like.

As ever with ZM, this is a wealth of information with plenty of information about the real aircraft as well as the model (I notice from the instruction book that a reference book is available separately from the manufacturer). Each section deals with that sub-assembly in detail and from experience it is worth spending a few hours studying the instruction book before you make a start. Take your time, believe me, it will pay you dividends in the long run to develop your build plan and work closely to the build sequence suggested.

I have photographed a selection of pages from the book that runs to 55 A4 size pages, so that you get a flavour for exactly how it all works and goes together. What I particularly like are the numerous photos in the book showing how each completed sub-assembly should look – from experience this is really helpful during the build. 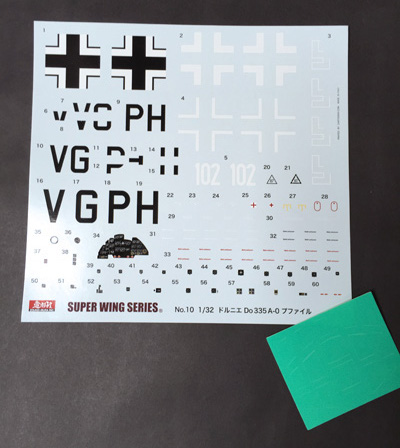 The Do 335 didn’t see meaningful operational service, entering WWII right at the end of hostilities with a number of prototypes and pre-production aircraft flying and this is reflected in the limited markings supplied in the decal choice Do 335A-0 VG-PH. What I think would be interesting is to use a combination of the kit decals (or maybe paint masks that will look much better in this scale – no decal carrier film visible) and some from the spares box or aftermarket to create an operational machine in service with one of the units that may have flown the type, had the War gone on into 1946 when the many Do 335 aircraft were scheduled for delivery – I may do this, we’ll see.

A nice touch is the inclusion of canopy masks to speed up painting.

This is certainly a comprehensive package – you’d expect nothing less from ZM as they have grown and developed. Quality is very high across the board, detail is sufficient for all but the pedantic and if you like WWII and Luftwaffe subjects, not to mention pretty large models you’ll love this kit. I mentioned at the start that the Do 335 Pheil isn’t my most favourite Luftwaffe subject, not that that’s relevant to anyone but me really, and I mention it only because of what I see as the potential in this kit for a great modelling project and experience given what’s on offer, whether you really like the type or not.

The Dornier Do 335 Pfeil (“Arrow”) was a World War II heavy fighter built by the Dornier company. The two-seater trainer version was also called Ameisenbär (“anteater”). The Pfeil’s performance was much better than other twin-engine designs due to its unique “push-pull” layout and the much lower aerodynamic drag of the in-line alignment of the two engines. It was Germany’s fastest piston-engined aircraft of World War II. The Luftwaffe was desperate to get the design into operational use, but delays in engine deliveries meant only a handful were delivered before the war ended.

In May 1942, Dornier submitted an updated version with a 1,000 kg (2,200 lb) bomb load as the P.231, in response to a requirement for a single seat, Schnellbomber-like high-speed bomber/intruder. P.231 was selected as the winner after beating rival designs from Arado, Junkers, and Blohm & Voss development contract was awarded as the Do 335. In autumn 1942, Dornier was told that the Do 335 was no longer required, and instead a multi-role fighter based on the same general layout would be accepted. This delayed the prototype delivery as it was modified for the new role.

The distinctive use of a nose-mount annular radiator for the forward engine (much like a Jumo 211-powered Ju 88, or Jumo 213-powered Focke-Wulf Fw 190D-9) and a ventral-fuselage mount airscooped radiator installation for cooling the rear engine (appearing like that on a P-51 Mustang), when fitted with DB 603A engines delivering 1,750 PS (1,287 kW, 1,726 hp) at takeoff — the largest displacement (at 44.52 litres) inverted V12 aircraft engine design mass-produced during the Third Reich’s existence — the Do 335 V1 first prototype, bearing the Stammkennzeichen (factory radio code) of CP+UA, flew on 26 October 1943 under the control of Flugkapitän Hans Dieterle, a regular Heinkel test pilot and later primary Dornier test pilot. However, several problems during the initial flight of the Do 335 would continue to plague the aircraft through most of its short history. Issues were found with the weak landing gear and with the maingear’s wheel well doors, resulting in them being removed for the remainder of the V1’s test flights.

The Do 335 V1 made 27 flights, flown by three different pilots. During these test flights the V2 (W.Nr 230002), Stammkennzeichen CP+UB was completed and made its first flight on 31 December 1943, again under the control of Dieterle. New to the V2 were upgraded DB 603A-2 engines, and several refinements learned from the test flights of the V1 as well as further wind tunnel testing.

On 20 January 1944, the Do 335 V3 (W.Nr. 230004), Stammkennzeichen CP+UC was completed and flown for its first time by Werner Altrogge. The V3 was powered by the new pre-production DB 603G-0 engines which could produce 1,900 PS (1,400 kW) at take-off and featured a slightly redesigned canopy which included twin rear-view mirrors in blisters, one in each of two matching side panels of the well-framed, eleven-panel main canopy’s openable section. Following the flights of the V3, in mid January 1944, RLM ordered five more prototypes (V21–V25), to be built as night fighters. By this time more than 60 hours of flight time had been put on the Do 335 and reports showed it to be a good handling, but more importantly, very fast aircraft, described by Generalfeldmarschall Erhard Milch himself as “…holding its own in speed and altitude with the P-38 and it does not suffer from engine reliability issues”.

Thus the Do 335 was scheduled to begin mass construction, with the initial order of 120 preproduction aircraft to be manufactured by DWF (Dornier-Werke Friedrichshafen) to be completed no later than March 1946. This number included a number of bombers, destroyers (heavy fighters), and several yet to be developed variants. At the same time, DWM (Dornier-Werke München) was scheduled to build over 2000 Do 335s in various models, due for delivery in March 1946 as well.